WBC heavyweight champion Deontay Wilder knew when it landed. He gestured to the crowd, said something to ringsiders and walked off. That huge right hand had just connected on the head of Luis Ortiz and the 40-year-old Cuban had fallen and couldn’t get up. (photo by Ryan Hafey)

Wilder knew. It was his 41st knockout in 42 wins so he’d had plenty of practise landing shots that paralyse an opponent and leave them scrambling for their senses and their legs.

It had started quietly enough for the bombastic Bronze Bomber.’

The opening round was of the feeling out variety.

Wilder was twitching, feinting for opportunities, Ortiz was racking up points behind economical jabs and southpaw left hands.

But Wilder fights like he knows he holds the winning hand, he has the equaliser and he has 12 rounds in which he would be able to prise open one lone shot or that chance would reveal itself.

You wouldn’t associate Wilder with the word patience, but for several rounds he waited, he stood, he watched.

Some thought he was looking uncomfortable, that the weight of pressure and expectation was getting to him. But Wilder fights with inevitability in his eye. “I will get you.” He’s not fighting for decisions or points; you’re welcome to them. He’s boxing to achieve one thing. Even at the end of round five, when he was clipped by a hook and a straight shot, he shrugged and stalked back to his corner.

He was out for round six – five rounds down on some cards – well before Ortiz.

The challenger had been doing more than Wilder and more than enough to win rounds. He, too, was boxing within himself, not letting himself get carried away with his successes.

The crowd in Las Vegas ‘oohd’ and ‘aahd’ as Wilder unfurled a left hook that was wide of the mark. But it’s the sort of shot they pay money to see. Or, more pertinently, they pay to see what happens when it lands.

By round seven, Wilder decided to let the bombs go. Ortiz smiled. He could feel the difference. The mood had changed. Wilder launched more in that round than he had in the fight to that point, or so it felt. Ortiz, emboldened with six positive rounds before him, engaged. The American worked his opponent’s body but took some shots back. Ortiz was welcoming the fight. His mindset changed from trying to edge ahead each minute of each round to relaxing into a firefight. 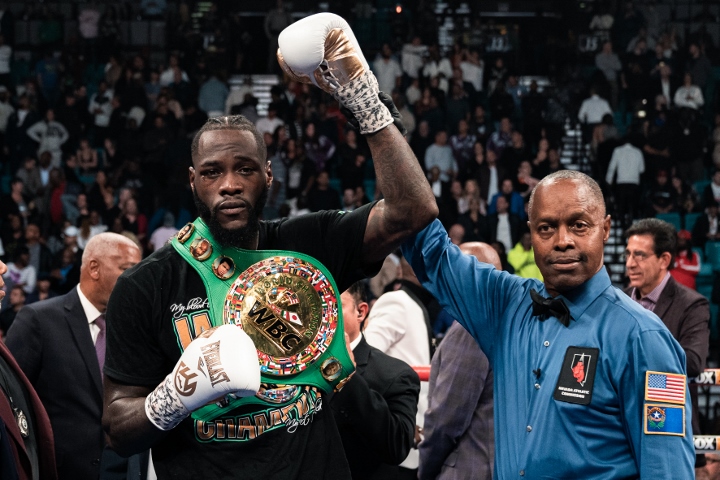 Then Wilder fired his bazooka.

He pawed out his left, not to hit or hurt the old man but to line up the right hand.

The signs were there and Ortiz froze dead in its path. He actually leaned into the shot and milliseconds later his legs had collapsed, his back cannoned off the ropes and his head ricocheted off the canvas.

His feet were joined but his knees were open, it looked like he was stuck at the bottom of a sit-up.

He fumbled both his mouthpiece and his senses, rolled onto one knee, tried to step onto the canvas with both feet as though he were mounting a tightrope and then it was waved off.

He didn’t protest. He didn’t even know what had happened.

Six rounds had been turned to dust by the snap of Wilder’s right hand. One face. One name. One punch. Time and again he’s showed it doesn’t matter what the critics say or what his opponent does, he will get you in the end.

And as it was earlier in the year, it’s now over to you AJ.

After Wilder turned Dominic Breazeale into a gif in May the pressure was on Anthony Joshua to look spectacular against late-sub Andy Ruiz. Joshua admitted he took the bait and tried to dazzle, and then he got caught, history was made and the trajectory of the division was changed.

He would do well to try and ignore what happened in Las Vegas when he fights Ruiz as the challenger for his old belts in Saudi Arabia in two weeks. The Englishman needs to win first with everything else secondary concerns; whether he impresses, whether it’s a knockout, it really doesn’t matter. Joshua needs a firm-footing back in the division he was commercially bossing before the wheels came off and to do that he needs the titles back. He needs to show that what happened in New York was a blip.

Wilder, who made the 10th defence of his WBC belt, confirmed after last night’s annihilation that the Tyson Fury rematch was on for as early as February and then he wants to unify, either against PBC stablemate Ruiz should he repeat the trick or against Joshua, in what is likely the biggest fight that can be made in the sport today.

Of course, there are many promotional and network obstacles that need to be negotiated if we are to get that and Ortiz will still hope to come again, too. Wilder vouched for him afterwards, saying he was worthy of another title shot but the Cuban, depending on who you listen to is 1,327 years old now and he won’t be at the top of the shopping list of many top heavyweights.

While we wait Ruiz-Joshua II and Wilder-Fury II in the hope that we do wind up with one face and one name ruling the land of the giants it would be nice if the inevitability of the fights happening was as inevitable as a Wilder right hand because when it comes to politics, boxing and money nothing can be taken for granted.

[QUOTE=skinnystev;20212309]ortiz did get up they stopped the fight anyway[/QUOTE] Yes they had to stop it so he wouldn't get bodied on live PPV. That saved his career so he can fight another day and kept him from being hospitalized gotta…

[QUOTE=ChadVegas;20211440][I][B]Puzzyfruit struggled w a 40,41 year old ex champ getting off his couch [/B][/I] Ortiz has been fighting regularly and has been ducked by matchroom shower boys the last 3.5 years The eyeball test says how good Ortiz is..thats why…

[QUOTE=landotter;20211254]I like Ortiz. I respect Fury. I will also spot Wilder the lame mandatories he is forced to fight to keep his belt. But 2020 needs to be the year the competition is the best names out there, minus any…

[QUOTE=Boxingfanatic75;20211169]Don’t feed the hero worshippers. They’re still butt sore that their prince lost to Andy frickin Ruiz and was exposed to having what we all knew was a glass jaw. They know further that his career is finished so are…

[QUOTE=Jkp;20211037]Whyte is terrified of ortiz. Already ducked him more than once. And Rightly so. He would get taught a lesson and made to look like the c grade fighter he is.[/QUOTE] I love how the guys who hate on Ortiz…