And while there is not actual agreement in place, Eubank Jr. does not rule out the scenario of working permanently with Hunter.

Eubank, who is coming off the biggest win of his career, has been working at Hunter’s gym in Oakland, California. 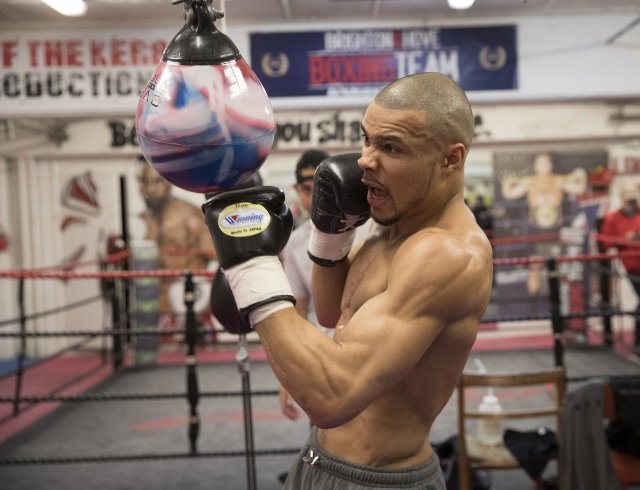 Earlier this year, Eubank secured the biggest win of his career when he retired former world champion James DeGale with a dominant twelve round decision.

For that bout, Eubank was working for the first time with trainer Nate Vasquez.

At the moment Eubank is working side by side with countryman Amir Khan, who Hunter is aggressively preparing for a scheduled fight with WBO welterweight Terence Crawford on April 20th.

"I’ve seen what Virgil has done over the years, but I wanted to see it up close in person and work with him a little bit, just to see how it is. It’s just exploring, Virgil’s not my new trainer. I’m just having a little dabble. It absolutely could turn into something, but you can never tell how life is going to turn out," Eubank told The Mirror.

"Distance is definitely something I’m looking to improve on. I’ve had certain injuries that have forced me to focus on inside fighting. I'm now injury free so I want to get back to distance fighting and learning more about being on the outside. Virgil is a master of those things. Looking at his biggest success story, Andre Ward, I can see some similarities in our fight styles.

"He had all that success with him and I think that would transfer well to my style. That was another reason why I wanted to come and see what he’s about."

Hunter also told the paper that he's open to the idea of working with Eubank on a full-time basis.

"I don’t know if we will end up working together," Hunter said. "I don't know if I can spend two months in the UK training him, but I’ve told him I should be able to answer any questions he may have.

"When he came here I asked him what he wanted to improve and he said his jab. I thought his footwork needed to be worked on. Whoever taught him, taught him hands first, but it should be feet first. Right now he’s carpet bombing. You have to carpet bomb to soften guys up and then you drop your payload on them. But he’s not using his feet properly to get into position to drop his payload."

Lol, I like Eubank and think he's a great fighter, but his style is nothing like Ward's style, and he'll do well not to reinvent himself. Ward was a defensive grab and clinch bore. Jr is a great attacking fighter…

[QUOTE=KTFOKING;19634238]I thought Vazquez did a good job with him in the Degale fight. Not sure switching trainers again is the best thing here. Should stick with Vazquez.[/QUOTE] Working with Vasquez, and actually having real success, may have finally opened up…

I thought Eubank looked really sharp and executed his gameplan well against Degale, while training with Nate Vasquez. Virgil Hunter has had a great success story with Andre Ward but I don't believe any other fighter that has came to…

That's a good move if he actual listens. Eubank should be fighting at 160 and targeting Charlo.

[QUOTE=Dramacyde;19634393]Virgil gotta be one of the most overrated trainers in Boxing, unbelievable that he has all these fools giving him their money.[/QUOTE] As much I love Virgil, I gotta concur. He gets credit based off of training Ward who is…