Nordine Oubaali attempts the first defense of his bantamweight title, as he faces Philippines' Arthur Villanueva.

Oubaali (15-0, 11KOs) claimed the title in a thrilling 12-round points win over former amateur rival Rau'Shee Warren this past January in Las Vegas, Nev. The battle of multi-tour Olympians ended similarly to their 2012 London Olympics meeting, with Oubaali—a two-time Olympian from France—outpointing USA's lone-ever three-time Olympian in Warren, a former bantamweight titlist.

Villanueva (32-3-1, 18KOs) makes his third career attempt at a major title. The 30-year old Filipino came up short in bids versus McJoe Arroyo and Zolani Tete, along with suffering a knockout loss to unbeaten former titlist Luis Nery. 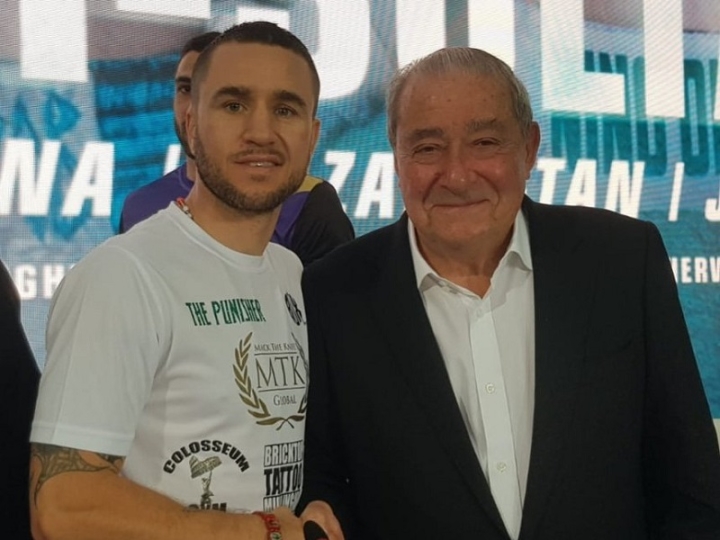 Viktor Kotochigov became the first signee for managerial outfit MTK Global’s Kazakhstan branch. It meant the first fight at home for the unbeaten lightweight in more than 18 months, but perhaps getting more than he bargained for in a 10-round win over Mexico’s Jairo Lopez.

The unbeaten and well-traveled 26-year old prospect was able to establish distance early in the contest, but Lopez—fighting outside of his native Mexico for just the second time in his career—was able to close the gap midway through the contest.

Kotichigov (10-0, 4KOs) was tagged more than he expected, using lateral movement to avoid additional punishment and also to tire out his opponent. It worked to a degree, although Lopez seemed more bothered by a clash of heads in round eight which left him with a nick over his right eye.

The sequence proved a key momentum shift for Kotichigov, who by no means was losing rounds but was able to turn up the aggression. A right hand rocked Lopez (24-11, 16KOs) in round nine, the closest the contest came at any point to ending inside the distance.

Kotichigov’s lone other fight at home came in Dec. 2017, having fought in eight different countries through just 10 pro starts.

For the second straight fight, David Oliver Joyce was forced to go deeper than at any other point in his young pro career.

This time around, the unbeaten Irish prospect had to make the most of an awkward matchup, pitching a shutout over a reluctant Breilor Teran in their 10-round featherweight bout Saturday evening in Astana, Kazakhstan.

The early start threatened to offer a competitive affair, with Teran scoring with a right hand to briefly catch the attention of Joyce. The sequence proved to be an isolated instance, with Joyce quickly taking over the fight which bore greater resemblance to a wrestling match.

Teran has shared the ring with six former or current major titlists, a run that includes a win over Cesar Canchilla and having gone the distance in losses versus the likes of Alexander Muñoz and Julio Ceja. Of his six fights at that level, only Emanuel Navarrete—a current 122-pound titlist—was able to score a stoppage win over the Venezuelan journeyman.

Attributing to such survival skills isn’t a granite chin but his ability to slow down action to a crawl. It occurred on Saturday, as Joyce spent as much time fighting his way out of clinches as he did in looking to score his second consecutive stoppage win.

The latter wouldn’t come close to happening, although Teran was repeatedly disciplined for his blatant holding tactics, receiving his first official warning in round five. The 34-year was warned in every subsequent round along with being docked a point for the infraction in round seven.

Joyce was not without sin in the contest, as he twice received warnings for rabbit punching. The 32-year old prospect was otherwise in control throughout the night, stunning Teran in round eight but never to the point of picking up a seventh stoppage in his last eight fights.

Instead, he settled for a second decision win in his past three starts. This one turned out to be a landslide, with two judges offering 10-8 rounds despite the absence of a knockdown.

While not quite on the same career trajectory, Joyce is drawing similarly rave reviews in his early pro years. He stole the show in his most recent start, a 7th round stoppage of Stephen Tiffney this past April in Dubai and also streaming live on ESPN+.

Aaand now they've given his Stephen Tiffney win a NC too.

Why's it listed as a NC result on boxrec? Weird

[QUOTE=1hourRun;19882937]This bum Davey Joyce struggled vs. Breilor Teran, who has lost more times than Joyce sparred three-rounders in his entire life. Tha champ WBO 122 pound champ Emanuel Navarrete got Teran out of there in four, Joyce nearly got sparked![/QUOTE]…

Although it wasn't a great performance by Joyce I hardly think you can compare the lad's 10th fight to Emanuel Navarrete's 25th fight. Joyce is only learning his trade while Navarrete won the WBO world title 2 fights after facing…

This bum Davey Joyce struggled vs. Breilor Teran, who has lost more times than Joyce sparred three-rounders in his entire life. Tha champ WBO 122 pound champ Emanuel Navarrete got Teran out of there in four, Joyce nearly got sparked!