Lubin became the first fighter to knock out Smith in the 40-year-old veteran’s 18-year professional career. The strong southpaw knocked down Smith three times in the second round and once in the third, before their scheduled 10-rounder wisely was stopped after the third round on the Gervonta Davis-Hugo Ruiz undercard at Dignity Health Sports Park.

Eddie Mustafa Muhammad, Smith’s trainer, instructed referee Jack Reiss to stop their fight following the third round because Smith had taken too much punishment. 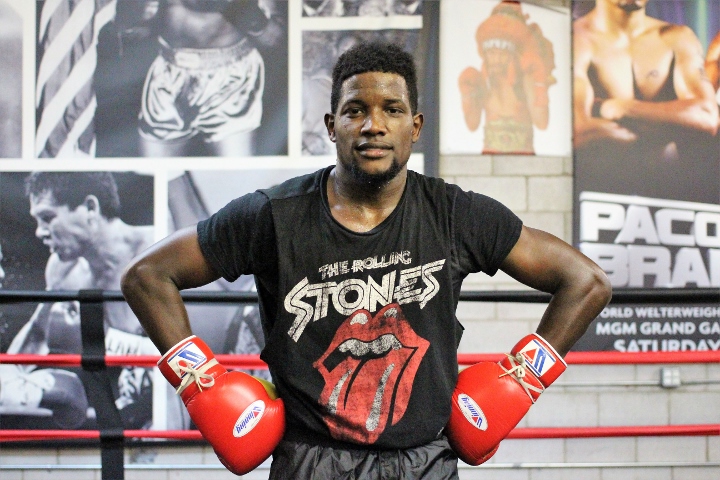 Smith showed the toughness he has displayed throughout his long career, but the faded former champion simply was overwhelmed by a younger, stronger fighter eager to prove his lone loss was a fluke.

Lubin (20-1, 15 KOs), of Orlando, Florida, fought for just the second time since Jermell Charlo knocked him out with one punch in the first round of their WBC 154-pound title fight in October 2017 at Barclays Center in Brooklyn. Las Vegas’ Smith (29-11, 12 KOs), an ex-IBF junior middleweight champ, lost a third straight fight.

“I felt great,” Lubin said. “I wanted to start off clam and poised. I was using my jab, like my corner was telling me to. But he wasn’t throwing anything, so I had to mix up my shots. I thought he was trying to get me into the later rounds.”

A straight left hand by Lubin landed to the side of Smith’s head and sent him to the canvas early in the second round. Smith fell to his gloves and knees, and then fell to his side.

Smith slowly answered Reiss’ count, yet clearly was buzzed as he tried to continue.

A short right by Lubin dropped him again, this time on the other side of the ring, as Smith tried to stay away from Lubin. Smith got up again and was shoved to the canvas by Lubin a short time later.

Lubin then hit Smith with a straight left hand and knocked down Smith a third time, in the center of the ring, toward the end of the second round. Smith reached his feet for the third time in that round and fended off Lubin to make it to the bell.

Smith tried to get back in the fight early in the third. Eventually, Lubin caught him with a right hand to the top of his head that sent Smith to the canvas for the fourth time in the fight.

Smith survived the final 10 seconds of the third round once he got off one knee. By then, Muhammad had seen more than enough.

“I hit hard,” Lubin said. “I saw that one of my shots shook him up and he dropped. I am a great finisher and I knew it was time to get him out of there. After the second time dropping him, I thought maybe he was a little shaken up because veteran fighters are capable of recuperating when they are hurt.”

The 23-year-old Lubin was much more impressive against Smith than he was when he stopped Silverio Ortiz in the fourth round of his first fight following his knockout loss. Mexico’s Ortiz (37-23, 18 KOs) caught Lubin with a shot that buzzed him in that short bout, but Lubin recovered and won convincingly April 28 in El Paso, Texas.

Even though Smith is way past his prime, Lubin believes his victory Saturday night should propel him toward a meeting with a top junior middleweight later this year.

Isn't Ishe Smith that fella off the original Contender series? The one who started crying in a live TV interview and saying he was suicidal? Someone needs to keep an eye on him after his first stoppage loss.