Erickson Lubin didn’t exactly excite viewers for much of his fight with Terrell Gausha on Saturday night, but the junior middleweight contender did what was necessary to secure his second title shot.

Lubin beat Gausha by unanimous decision in their largely uneventful, 12-round, 154-pound elimination match and became the WBC’s mandatory challenger again. Judges Don Ackerman (115-113), John McKaie (116-112) and Tom Schreck (118-110) each scored their forgettable fight for Lubin in the main event of Showtime’s tripleheader from Mohegan Sun Arena in Uncasville, Connecticut.

Gausha stunned Lubin with a right hand in the final minute of the 10th round, but Lubin regained his composure.

“I’ll give myself like a B-minus,” Lubin told Showtime’s Brian Custer. “I think a little bit of the [10-month] layoff had something to do with it. But Gausha’s a tough competitor. He’s at the top of this weight class for a reason. And, you know, I just wanna stay active. And I definitely want my title shot.”

By beating Gausha, Lubin became the WBC’s mandatory challenger for its 154-pound title for the second time in his career. The winner of the upcoming Jermell Charlo-Jeison Rosario title unification fight will be obligated to battle Lubin, who wants to avenge his one-punch, first-round knockout defeat to Charlo in October 2017 at Barclays Center in Brooklyn.

Lubin was the mandatory challenger for Charlo’s WBC belt entering that bout. 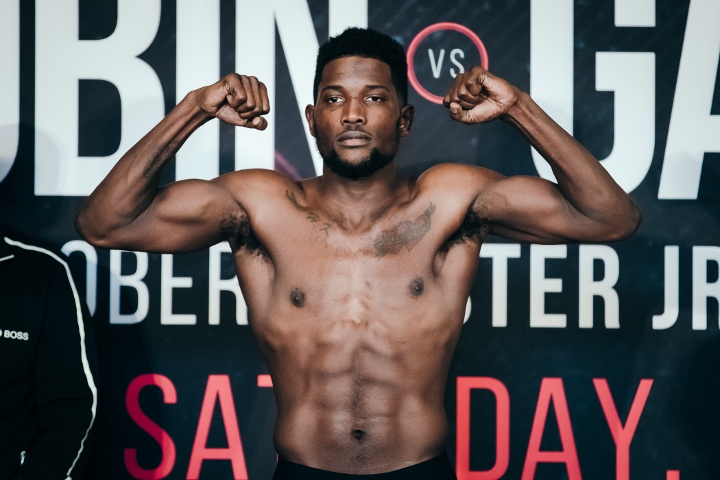 The southpaw from Orlando, Florida, joined Cuban southpaw Erislandy Lara as the only opponents to defeat Gausha. Lara knocked down Gausha in the fourth round and beat him by unanimous decision in their 12-round fight for Lara’s WBA and IBO titles on the same card when Lubin lost to Charlo.

The action intensified in the eighth round Saturday night, but Lubin acknowledged the tactical nature of the first seven rounds.

Lubin and Gausha were supposed to square off last October 26, but a hand injury caused Gausha to pull out of that bout. Lubin instead defeated Nathaniel Gallimore (21-5-1, 17 KOs) by unanimous decision in a 10-round main event at Santander Arena in Reading, Pennsylvania.

In the 12th round Saturday night, Lubin connected with a straight left, but Gausha quickly came back to land a straight right just after the midway mark. Lubin drilled Gausha with a right hook that turned Gausha’s head with 43 seconds to go in the fight.

Lubin threw a left-right combination to Gausha’s body just after the halfway point of the 11th round.

The 10th round unfolded like most of the first nine rounds, until Gausha hurt Lubin with a right hand he landed out of a clinch. That shot made Lubin lose his footing with 56 seconds to go in the 10th round.

Gausha tried to capitalize on buzzing Lubin, but Lubin held and recovered.

After finally picking up the pace during the eighth round, Lubin and Gausha were active again in the ninth round.

Gausha’s right hand backed up Lubin about 55 seconds into the ninth round. Lubin snuck a right hook around Gausha’s guard at the midway point of the ninth

Barely 10 seconds into the eighth round, Lubin landed a straight left hand. About 20 seconds later, Lubin connected with another straight left that backed Gausha into the ropes.

Lubin let his hands go later at about the midway point of the eighth round, which made Gausha cover up.

The seventh round mirrored most of the previous periods, as neither fighter seemed willing to take risks

Gausha missed wildly with a right hand with about 45 seconds to go in the sixth round. Lubin landed a straight left hand a few seconds later.

Lubin and Gausha were tactical again in the fifth round. When they did let their hands go, they mostly missed with their jabs and power punches.

Gausha landed a straight right hand with just under 1:10 to go in the fourth round. Lubin landed a hard jab with about 15 seconds remaining in the fourth.

Gausha remained tentative throughout the third round, but he didn’t take many flush shots in those three minutes, either.