Eleider Alvarez: Andre Ward Beat Kovalev Both Times - I Will Too!

Light heavyweight contender Eleider Alvarez (23-0, 11 KOs) is deep in training for the biggest fight of his career.

"Everything is going very well. You have to remember that I have a good team, which allows me to prepare for that commitment without any setback. We will be ready," Alvarez said to ESPN Deportes. 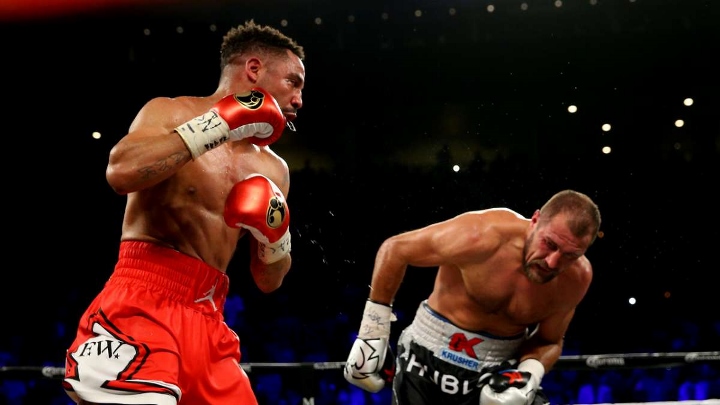 Alvarez is not a big puncher, but he does have respectable power.

If a knockout comes, he will indeed jump on the opportunity to get it - but he aims to be ready for a very long night.

"I always prepare to fight for fifteen rounds. I have a good team, an excellent physical trainer, excellent coach and we always try to make the best preparation. In any fight I've had, since I've been in a top ranked position, I'm never tired at the corner when the fight is over. Even the final rounds are the best for me. As I have always said, the knockout is not pursued and sometimes it just arrives. If we can finish the fight before the twelve round distance, we welcome it," Alvarez said.

Alvarez has studied the two defeats of Kovalev's career - and both of them came at the hands of Andre Ward.

There are some who felt the first contest between them was controversial, where Ward got off the floor to win a close twelve round unanimous decision. In the rematch, Ward stopped Kovalev in the eight round. Kovalev has won two bouts since.

Alvarez saw no controversy. He felt Ward was the clear winner in both bouts.

"I had the opportunity to watch the two matches. In the first one, I saw Andre Ward as the winner, I think by two rounds. And I've always said, if Kovalev did not beat him the first time, then the second time was going to be impossible. Ward is like the Mayweather of 175, a very smart boxer. And yes, I saw some little things that I can work on from those fights and we will try to put them into practice [during training camp]," Alvarez said.

[QUOTE=BoxingTech718;18827028]Kovalev is weak to the body and has questionable cardio. Ward exposed those weaknesses. Anybody that’s going to beat Kovalev has to be durable and able to fight inside like Ward.[/QUOTE] I really didn't see Alvarez fighting on the inside.…

[QUOTE=j.razor;19035450]Now that S.O.G. clearly beat "kusher" TWICE & Eleider Alvarez said he would beat AND did beat the so called "krusher" are you still going to ride that he won the 1st fight doe scam?? LMMFAO! Truth ALWAYS comes to…

[QUOTE=PunchyPotorff;18828737]Quote: Originally Posted by PunchyPotorff View Post IMO Kovalev beat Ward in the first fight, and I'm definitely not alone in that opinion. But like some others have brought up, how will Alvarez do with his elbowing, ball punching etc…

[QUOTE=Rip Chudd;18827780]I've watched the first fight plenty of times, Andre lost. You aren't going to change my mind bro[/QUOTE] Now that S.O.G. clearly beat "kusher" TWICE & Eleider Alvarez said he would beat AND did beat the so called "krusher"…

With such poor vision, he may have a difficult time seeing punches coming at him. Maybe he should give up boxing and be a judge or a referee instead.