The city of Los Mochis in the northern state of Sinaloa in Mexico has produced a string of top class boxers who have made their names on the international stage by becoming world champions.  Fernando Montiel, Antonio DeMarco, Jorge Arce, Hugo Cázares and Humberto Soto are just a few in recent times who boxing followers across the globe will be familiar with.  Eduardo Ramírez (20-0-3, 7 KOs), trained by the aforementioned Montiel’s brother, was hoping to add his name to the list this Saturday night in London when he challenges IBF world champion Lee Selby at the Copper Box.

However, it emerged that ‘Zurdito’ did not make the regulation weight as set by the British Board of Boxing Control three days prior to the contest and thus the fight will now take place at 128lbs.

Speaking to BoxingScene.com a few days ago from an airport in Mexico on his way to London, Ramírez emphasised his desire to dethrone his Welsh opponent which will not be possible. 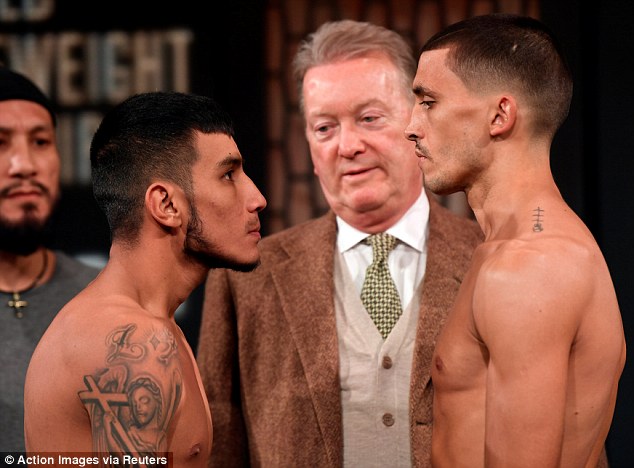 “I’m very excited, very motivated for this chance to fight for the world title,” he enthused.

“I feel in top shape for this challenge, I’m physically and mentally ready. I’m very positive and I’m going to take that belt away from him.”

Selby defeated Montiel by unanimous points decision back in October 2015, however, Montiel put up a better performance than some had been expecting given that the Mexican was generally considered to have seen better days at that point in his career.

“My trainer is Fernando Montiel’s brother and all my team know Lee Selby very well because of that fight, and they’ve come up with a good strategy for me.

“I’m used to fighting away from home now, being the visiting fighter.  I’m in great physical shape and I’m going to give my all in the ring and throw punches for all 12 rounds so I won’t leave any doubts in the judges’ minds.

“Selby is a very good fighter,” he continued.

“He’s a good champion and I think this is going to be a good fight.  Let’s hope it’s a war and the fans enjoy it.”

In his last ring outing, Eduardo faced Cuba’s Leduan Barthelemy, brother of Rances.  The fight ended in a draw with one judge scoring it in favour of Ramírez 96-93.  That contest, last September, merely added to the growing belief of the 24-year-old.

“I took confidence out of that last fight, he was a hard fighter to compete against, he was unbeaten like myself.  He’s a Las Vegas resident and I was the visiting fighter again.  I thought I won the fight, it was close, but I threw more punches and landed more.

“In any case, at least they didn’t hand me a loss and I go forward still unbeaten.  I’m not going to waste this chance, I’m going to be world champion on November 9.  I’ve prepared my whole career for this type of challenge.”

[QUOTE=Boxnation fan;18317574]It would be countered as a title defence for Selby but if Ramirez wins which i think he will, he won't be given title.[/QUOTE] ohh right, thanks for the clear up

[QUOTE=P4Pdunny;18317511]i thought the title wasn't on the line due to Ramirez not making weight[/QUOTE] It would be countered as a title defence for Selby but if Ramirez wins which i think he will, he won't be given title.

Great Fight. I wouldn't be surprised if this turns out to be an upset especially due to Ramirez not even bothering to make weight hehe.