Dubois Even More Confident of Blasting Out Whyte - Fury Agrees

Should Dubois win, he then will move forward with an October 24th clash with undefeated Olympic silver medal winner Joe Joyce.

Frank Warren, who promotes Dubois, had been pushing for a fight with top contender Dillian Whyte. 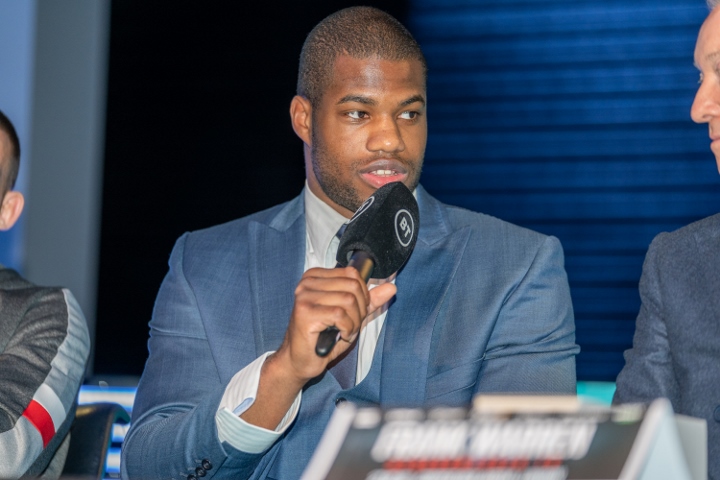 Whyte expressed very little interest in the fight, as he was targeting a potential world title bout with WBC heavyweight champion Tyson Fury.

But this past Saturday night, Whyte was knocked out cold in five rounds by veteran Alexander Povetkin.

Whyte was ahead in the fight and dropped Povetkin twice in the fourth. But, a massive uppercut in the fifth put Whyte to sleep before he even hit the floor.

The unexpected loss removes Whyte from his mandatory position under the WBC.

After watching the fight, Dubois is even more confident in his ability to knock Whyte out.

If Whyte is defeated in his rematch with Povetkin, then Dubois wants to drag him in the ring.

"I've always known I would knock out Dillian. I'm even more certain after watching what Povetkin did to him on Saturday night. If Alexander does him again maybe he'll have to face me," Dubois said.

And Dubois is not alone in that belief.

His promoter would also back him to win the fight with a big knockout.

And another big believer in the abilities of Dubois is Tyson Fury.

He expects Dubois to blast out Whyte in the same devastating fashion as Povetkin did.

“I see Daniel knocking him unconscious to be honest like Povetkin, too young, too big, too strong,” Fury said.

I think D is better than many here seem to think. But let's just see.

DDD is getting there, but he would get stopped by Whyte, that’s the reason they wouldn’t even take a chance on Pfeifer. As soon as they knew he could be a threat, Warren quickly found an issue with his paperworks…

[QUOTE=TMLT87;20727207]I think Dubois and for that matter Joyce are both capable of giving the B tier guys (Whyte, Povetkin, Ruiz, Parker, Pulev etc) plenty of trouble.[/QUOTE] Whyte, Povetkin yes, they're definitely B tier. Ruiz and Parker are bonafide A grade.…