Dillian Whyte: Joe Joyce Looked Terrible - I Would Destroy Him!

Joyce (4-0, 4 KOs) was in action last Saturday night at the O2 Arena in London, when he beat down and stopped Lenroy Thomas in only two rounds to capture the Commonwealth title.

The contest was part of the pay-per-view undercard to the heavyweight rematch between David Haye and Tony Bellew. 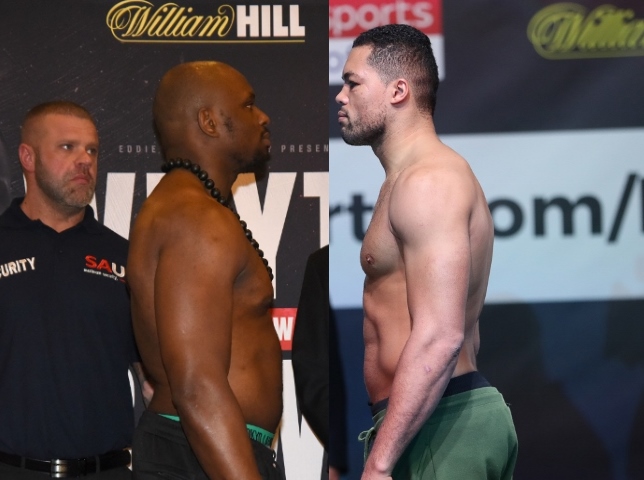 Joyce believes he is on the same level as Whyte.

But Whyte, who was sitting ringside, was not even remotely impressed with the Olympian's big win.

"He was terrible. He's got no defence and no power," Whyte told Sky Sports.

"He's got a good engine and a decent boxing brain but he leads with his head. Anyone who's a clever fighter will clip him because his head, and his chin, are up. Throw a big overhand right or a left hook, and you'll do him. If Joyce got in the ring with me, I would destroy him."

Whyte is offended that Joyce would even believe that he's on his level.

Joyce is looking for the big names as soon as possible, because at 32-years-old he made a very late start in the pro ranks.

Whyte explains that he believes Joyce had intentionally delayed his professional run.

"Just like David Haye, Joyce is very deluded. That's why they get on so well. He's 32, he's turned pro late. He's making noise to get some big fights. Why did he stay amateur for so long? Because he wasn't good enough. He waited for the good amateurs, like Anthony Joshua, to go through. He just wasn't good enough," Whyte said.

In the last few days, several heavyweights have rejected the idea of fighting Joyce - including Hughie Fury, Jarrell Miller and Dereck Chisora.

Joyce is promoted by Hayemaker Ringstar - which is run by Haye and Richard Schaefer.

[QUOTE=Shrap;18756370]:lol1: What?! He got absolutely dominated from start to finish by Usyk. He didn't win a single point on a single card, struggled to land anything and got toyed with by the end. Definition of a one-sided fight and Usyk…

[QUOTE=kafkod;18756774]Whyte was calling out Ortiz back when Ortiz was fighting with matchroom. It's a fight he's wanted for a long time .. but not as an eliminator for Wilder, because he believes he should be Wilder's mando already, and if…

Whyte would be crazy if he fought Joyce next, when he is so close to title shots with both the WBC and IBF. He thinks he would beat Joyce, and he would be favourite if it happened, but beating a…

[QUOTE=uppercut510;18756282]why cant he just fight him? hes an old bum afterall right?[/QUOTE] Whyte was calling out Ortiz back when Ortiz was fighting with matchroom. It's a fight he's wanted for a long time .. but not as an eliminator for…

[QUOTE=DramaShow;18756623]Joyces mum is black you clown.[/QUOTE] :lol1: ha My mate only only realised bellew was half cast on the weekend :lol1: daft Kent