Dillian Whyte Gets Off The Floor To Decision Oscar Rivas

Dillian Whyte has sat atop the World Boxing Council (WBC) heavyweight ratings for nearly two full years but never any closer to landing a title shot than when he entered the ring Saturday evening.

One can only hope his latest win over a top-shelf heavyweight finally gets him to that point. 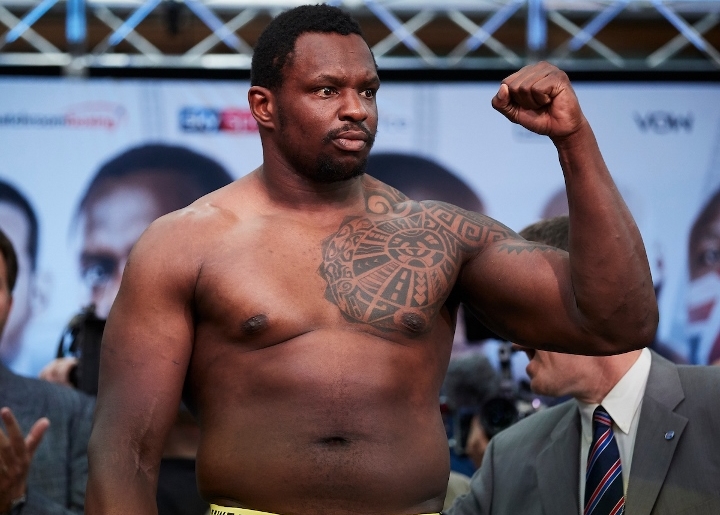 Scores were in favor of Whyte, who now claims the WBC interim heavyweight title which is supposed to guarantee him a crack at long-reigning full titlist Deontay Wilder.

Whether or not that actually materializes is another matter altogether.

“We’ll see,” Whyte said afterward, clearly long ago giving up on holding his breath over promises kept. “A lot of things get said but not much gets done. Mandatory position means I could be sitting on that ranking another 600 days.”

Both boxers looked to establish their jab early. Whyte was the more consistent, doubling up on the stick in the opening round of his first fight since a thrilling 11th round knockout of Dereck Chisora in their rematch at this venue last December. The local favorite followed up with the occasional body punch befitting his ‘Body Snatcher’ ring moniker.

Rivas followed up his own jab with right hands over the top, trying to nullify a height and reach disadvantage by beating Whyte to the punch. It rarely worked out that way, certainly not at all in a round two that had Rivas wobbly following several right hands upstairs by Whyte. The Brixton-based contender was aggressive in his attack, going straight after his wobbled foe in seeking to close the show or at least put him on the canvas.

Rivas survived the storm and managed to land enough right hands to keep Whyte honest, though not even close to claiming the round. It was enough to shift momentum, however, as the Canada-based Colombian played defense in a round three that saw Whyte swing and miss for most of the frame. An overhand right late in the session found its home, with Rivas taking the shot clean in showing a world-class chin.

Action slowed in the middle rounds, as Whyte readjusted his mode of attack and went back to working behind the jab. Rivas struggled to come up with a sufficient response, shooting his right hand wide and over the top of Whyte’s guard but producing minimal results. His wide shots allowed Whyte to cover up and avoid the incoming even before the shots ha a chance to launch.

Falling hopelessly behind through six, Rivas caught an earful—in French and English—from his career-long, top-shelf head trainer Marc Ramsay who demanded a much higher punch output, particularly to the body. Whyte sported a soft midsection in weighing in at a near-career high 259 pounds but managed to transport it well in forcing his desired pace.

Rivas did his best to heed his trainer’s advice, connecting with solid body punches early in round seven and again midway through round eight. Whyte took the shots well, playing defense in waiting out the flurries before going right back to his jab which all but shut down Rivas’ offense. A right uppercut in the final minute left the visiting challenger briefly stunned, with Whyte unloading until the bell.

The late surge drew concerns from head trainer Mark Tibbs, whom instructed Whyte to not get greedy. His words proved wise, as Whyte was caught cold with a right uppercut which deposited him to the canvas early in round nine. New life was breathed into Rivas’ attack, immediately jumping on his still dazed foe but expending a lot of energy in his best effort to close the show.

“I went to move, I crossed my leg and got caught with a punch,” noted Whyte of the bout’s lone knockdown. “I won every round after that.”

Whyte showed heart in riding out his worst round of the fight to that point, shaking off a right hand to connect with an uppercut just before the bell. The late surge didn’t mean anything to his corner, who gave him an earful and demanded he return to the weapons that worked before that near-disastrous stretch.

The response offered in round ten showed why Whyte remains the best heavyweight without any claims—current or former—to a major title.

Rivas hoped to catch lightning in a bottle but it was all Whyte throughout the three-minute session that proved to permanently put the fight out of reach. Doubling up on his jab, Whyte was able to set up potent right hand which wobbled his foe and allowed him to keep the action at his desired distance and pace.

The championship rounds opened with Whyte continuing to shoot his jab while Rivas failed to find a home for his right hand. His left eye rapidly swelling, the squat heavyweight couldn’t put together the necessary attack to overcome a massive deficit on the cards.

Whyte stuck with the jab to start the 12th and final round, while Rivas tried in vain to inch forward and connect with a home run punch. His wide shots were repeatedly picked off by Whyte’s tight guard, shifting back and covering up any time his foe went into the wind up and then responding with counter right hands.

One last gasp from Rivas saw a clean right find its way to Whyte’s chin. The sequence was a brief reminder of the near disastrous finish in Whyte’s eventual points win over Joseph Parker in this very venue last summer, when he suffered a late knockdown but still managed to emerge victorious.

That moment wouldn’t be replicated here, as Rivas couldn’t properly follow up as the bell sounded to end his days as an unbeaten contender.

Rivas was once a hot commodity in the heavyweight division, storming through the prospect stage of his career only for medical issues to grind such progress to a halt. The California State Athletic Commission showed concern over past eye surgeries, denying him a license for his eventually canceled Feb. 2016 clash with then-unbeaten Gerald Washington.

He returned later that year, picking up seven wins versus middling competition before finally landing a meaningful fight earlier this year. Rivas had to overcome an early deficit versus Bryant Jennings to score a 12th round stoppage in their heavyweight tilt this past January to re-emerge as a legitimate heavyweight threat.

There were talks of Rivas serving as the dance partner of choice for the Las Vegas debut of unbeaten former lineal heavyweight champion Tyson Fury but instead fancied his chances versus another Brit in accepting this assignment.

It was a necessary risk but proved futile as his second career fight outside of North American results in his first career defeat in falling to 26-1 (18KOs).

Ten straight wins have followed his lone career loss, a 7th round stoppage at the hands of Anthony Joshua when both were unbeaten rising prospects ahead of their Dec. 2015 encounter. Conquering the sport’s ugly politics remains another matter but he at least removed any remaining arguments for why he shouldn’t be permitted to compete for the sport’s greatest prize.

“He’s mandatory,” promoter Eddie Hearn emphasized. “Dillian Whyte has worked so hard to get where he is today. He’s been the number one contender for more than 600 days. He could sit on (his mandatory ranking) but he won’t.”

His run over the past four years continue to prove as much.

[QUOTE=theface07;19948323]Groves was knocked out cold, he even said post fight that it was a shot he didn't see coming that put him down for the count. You are seriously deluded if you thought Groves could've continued and I was going…

[QUOTE=Roberto Vasquez;19944666]No man watch it again, Groves did a Fury and started to get up and the referee pushed him down and waved it off. What the ref is meant to do is to let him get up then look…

[QUOTE=theface07;19939522]Groves/Froch II? Groves got knocked out cold! Are you talking about Groves/Froch I? Yes, that was a quick stoppage. Dubois/Gorman? Gorman was finished! There's no way he was going to recover. Dubois would've knocked him into oblivion if that fight…

[QUOTE=Roberto Vasquez;19925663]I agree with this. It's more because they are over cautious. Even UK fighters arent given full counts to get off the floor. Fury would have lost against Wilder if that had been in the UK. Ref would have…

[QUOTE=alexguiness;19932994]UK referees are 100% quicker to stop a fight and make some very questionable calls. When Joshua 'stopped' Klit - all he was doing was hitting gloves and shoulders... UK refs are terrified that a fighter will sustain a serious…