Diego Magdaleno has faced challenges inside the ring in recent months, but more so outside of it.

Changes in his personal life and a much-needed victory looks like his career is moving in the right direction.

Magdaleno began 2020 with a unanimous decision victory over prospect Austin Dulay on February 15 in Nashville, Tennessee. The victory took place over a year after he was brutally stopped by Teofimo Lopez, who would eventually become the IBF lightweight titleholder.

The 33-year-old had thought about hanging up the gloves after the loss to Lopez, but decided to stick with the sport. After taking the fight against Dulay, Magdaleno decided to make a few changes within his camp.

“Those thoughts (of quitting) did come across my head because of the Lopez fight,” Magdaleno told BoxingScene in a recent interview. “I was going through a lot. I wasn’t physically healthy going into the Teofimo fight. Everyone looks at how you do from your last fight. Going into that (fight), I did have family members, friends, everyone was telling me that it was an ugly fight and maybe I should retire. You hear that enough and you start almost believing it. You start questioning yourself. But when I was told about my opponent Austin Dulay, me as a professional, I look at the fighter, I look at their record, I look at who they fought. I start picking him apart and I’m like, ‘I know what I’ve been through. I’ve been through every war possible.’ I have the experience going for me. This is a good fight for me. This is going to do a lot for my career. I need to get in there and get to work. That’s what I did. I got in there and I got focused.”

“I started cleaning up my whole circle. I got with (trainer and former contender) ‘Bones’ Adams. I’ve known him since I was eight years old. Just knowing and having that much comfort of knowing a person and trusting him to get me there. I started strategizing with him a game-plan. Everything just kind of worked and it made me feel so much better. That’s what boosted my ego in the gym. I was doing things in the gym. Knocking guys out, hurting guys to the body during sparring. So that’s going to make me feel real confident going into the ring with anyone. Shannon was really good with my diet. The (Dulay fight) was probably the best camp we had as far as diet goes. I didn’t have any excuses. I wasn’t sick. I wasn’t (dealing) with my family because I left my family at home. I wasn’t battling any negativity. I left all that behind me. In order for me to move forward, I (had) to get rid of anything that was holding me back.”

With the victory over Dulay, Magdaleno improved to 32-3, 13 knockouts. 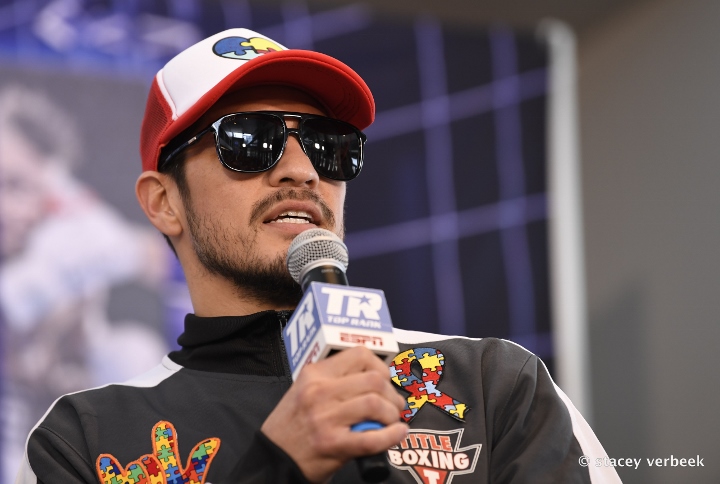 Magdaleno, who challenged for a world title belt twice earlier in his career, resides in Las Vegas, Nevada. Prior to the Dulay fight, Magdaleno decided to make some changes outside the ring, including training in the boxing hotbed of Oxnard, California.

The move paid off as he was able to get excellent sparring in preparation of Dulay.

“I spent six weeks training in Oxnard before the Dulay fight,” said Magdaleno, who has mostly fought under the Top Rank banner for the majority of his career.” I was having a little bit of trouble looking for some sparring. There were a couple of guys but I wasn’t getting great work. I reached out to Oxnard and asked around and found three guys to spar at the La Colonia Gym and we went to work. I started sparring on a Sunday. They opened the gym up for me on a Sunday. And a lot of guys won’t come in on a Sunday. It’s a day off (for most fighters). The people who have nothing are the ones who are willing to give you everything they have. That’s appreciated and that is why I thank those at La Colonia Gym for helping me out.”

Because of the outcome of the Lopez fight, Dulay was tabbed to defeat Magdaleno and move forward in his career. Fortunately for Magdaleno, he was able to implement an effective game-plan that resulted in getting a hard-fought victory.

Magdaleno was even able to pinpoint the moment in the fight when he was able to swing momentum in his favor and take advantage of the moment.

“The last 10 seconds of the third round. And that was the round I gave (scored for) him. That’s the round Austin Dulay had the best round. The first two rounds were us feeling each other out. He caught me with like four straight left hands. Straight on the button. That was the highlight of his round. I took them and I thought to myself that this guy doesn’t have that power. I took them like nothing. He did something at the end of the round, at the 10-second warning, when I threw a body shot and he made a sound and there was a painful look on his face. I knew he didn’t like it. The next round, we focused on all shots to the body. I thought that’s how we were going to stop this fight. When I hit him to the body in round 7, I was confident that he wasn’t going to survive. Tough guy. He came back up and finished the fight. I knew that the body punches were going to be the difference.”

“I’m a PBC fighter now. I signed a contract with PBC. Al Haymon reached out to me and they gave me an opportunity to work with him. I spoke with Sam Watson after (the Dulay) fight and he told me, ‘Welcome to the team.’ That was a big motivator for me. So I’m excited to be with PBC.”

“The only fighter at 135 pounds on the PBC roster is Gervonta Davis. A fight against him at the end of the year would be great for me. Or maybe early next year if I could take a fight later this year to eventually fight him. I think people want him to fight (Vasiliy) Lomachenko. I’m a solid southpaw that he can test the waters against. He didn’t look good in his last fight (against Gamboa). A lot of people say that he was exposed in his last bout. Gamboa is a crafty guy but he was fighting with an injured foot.”

Magdaleno was able to take advantage of an opportunity in the ring, but he still had to address issues out of it. After overcoming depression, Magdaleno is able to address other issues.

He hopes to continue to make strides in and out of the ring once the sport resumes in the midst of the COVID-19 pandemic.

“After the Lopez fight, and even before that, I was battling a lot of depression. No one knew. I was going through a really rough time. I’m glad I got over that hump with a win. Beating a fighter from Nashville in his hometown was huge. The way the promoters came up to me after the fight made me feel like Diego the champion again. I’m in a better state of mind and around good and better people.”

“We’re in negotiations and we’re in the process of opening up my own boxing studio in Las Vegas. My brother will have the option to use the gym if he wants, but it’ll be for any and all pro fighters to use. It’ll be a private gym and it’s going to be used for fighters for private workouts.”

Francisco A. Salazar has written for Boxingscene since September of 2012 and has covered boxing in Southern California and abroad since 2000. Francisco also covers boxing for the Ventura County (Calif.) Star newspaper. He can be reached by email at santio89@yahoo.com or on Twitter at FSalazarBoxing
Reply Reply All Forward

Once again, spelling errors are killing this site. I’ve offered my editing services for ZERO! You have my email address on file. I see four errors in this article. Including in the title. Come on guys. I can be of…

I like Diego and enjoy his fights. He's as tough as they come and always puts forth an honest effort. He lacks some of the pop and elite athleticism to put him in the top tiers. I wouldn't mind seeing…

If Magdaleno had some real power he probably would reached further in his career than he did. He's pretty much a gatekeeper nowadays.

Another KO for Davis he already smh