Earlier this month the Nevada Boxing Hall of Fame announced it's class of 2020 inductees and also announced its yearly awards.  Las Vegas resident Devin Haney (24-0) was in attendance when it was revealed that he will receive Fighter of the Year honors.  Previous winners include Floyd Mayweather Jr. and Terence Crawford.

Haney was in action 4 times in 2019 with 2 of his victories coming by way of knockout.  He captured the interim WBC lightweight title in September with a 4th round stoppage of the previously unbeaten Zaur Abdullaev in New York. 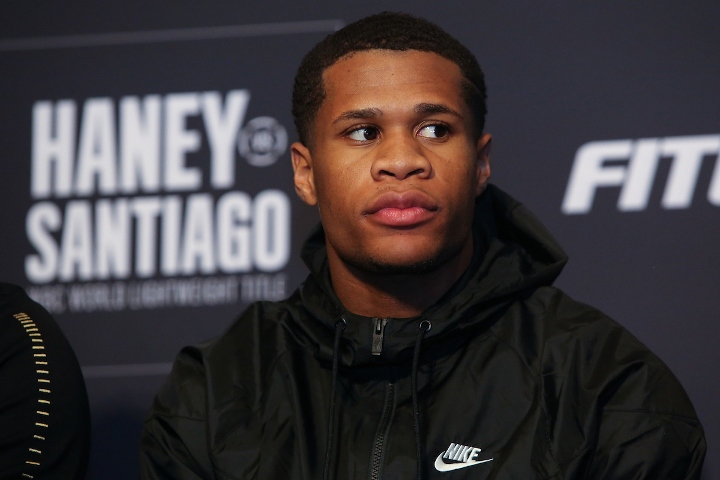 “I am blessed. I am very grateful for it. It is a dream come true for me - getting prospect of the year 3 years ago to me getting fighter of the year now. I knew that it would come but I never thought that it would come this fast. I am happy that I have been on the fast track and it paid off,” Haney told BoxingScene.com after being informed of his award.

Haney relinquished his title shortly after the victory over Santiago when he learned that he would need surgery on his right shoulder.

The 21-year-old said that his shoulder is healing up nicely and that he hopes to return to the ring in the early summer.  His return of course is contingent on the containment of the covid-19 coronavirus that currently has all sports shut down in the United States.

“My shoulder is healing up well. I am looking to get back in the ring in July. Hopefully it is in a big fight,” said Haney. "I have been doing some light hitting and am looking to ramp it up in a few weeks.

Who the **** has he fought? He blocked me on IG because i said to em that he stays trying to piggy back of Ryan’s name to build his name cause he cant do it on his own. He is…

I hope for goodness sake that shoulder is heal when the time come for Devin Haney to fight. :boxing:

Haney is the guy to watch .Lomo tank Lopez better watch out.

When Loma wins by KO/TKO/QUIT, he gonna be in the interview like: "He got my name wrong, it's NO-MAS-CHENKO!"