Tyson Fury shocked the world in February when he stopped the previously unbeaten Deontay Wilder in seven rounds in Las Vegas.  Wilder first hit the canvas in the third round and was on shaky legs the rest of the way until his co-trainer Mark Breland threw in the towel to the end the fight.

After the fight Wilder enacted his rematch his clause and July 18th was the target date before the covid-19 coronavirus outbreak stopped the sports world and will likely push the third Wilder-Fury to a fall date of October 3.

In the aftermath of the fight, some YouTube bloggers started making accusations against Fury, alleging that he failed a drug test and tampered with his gloves.  After the drug allegations were made, the WBC revealed that both Fury and Wilder passed all of their random drug tests. 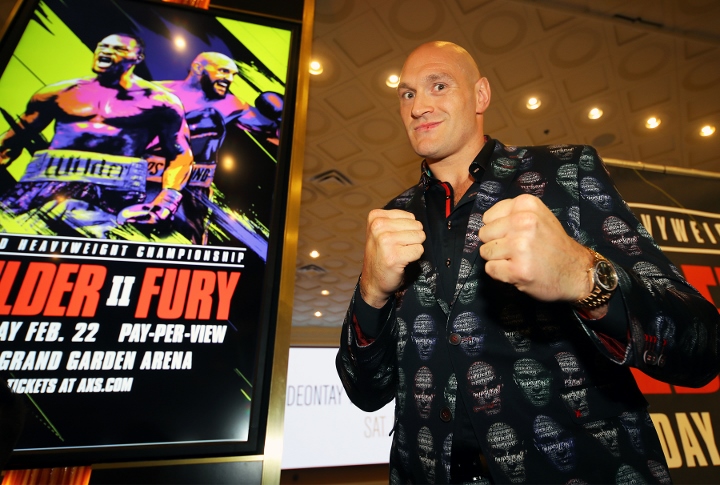 The allegation of glove tampering stems from the way Fury flicks his jab which he has utilized in several previous fights, including the first fight against Wilder. Some bloggers feel that Fury was able to manipulate his gloves and lower his hand inside of the glove which would enable him to punch without padding.

BoxingScene.com recently caught up with unbeaten former lightweight champion Devin Haney to get his opinion on the controversy.

“I don’t know. That stuff is crazy. I feel like if Tyson Fury did everything right and didn’t cheat then let him enjoy his win. Don’t discredit him or anything like that. I don’t know the situation. I seen the glove situation. I don’t know if it’s real or fake. The internet can make up anything these days so I am not sure. I don’t think it’s cool to be putting out rumors,” said Haney.

“Everyone sees it in fast motion. Nobody really sees it in slow motion so you don’t really see how the glove really reacts I think now that we are paying attention to it. Other people’s glove may do the same thing. We never know.”

[QUOTE=Goldie;20493518]Its called “a pattern of behavior” you nitwit. If you’re brought to trial charged with rape and the prosecution finds other credible witnesses claiming that you raped or sexually assaulted them too, that’s considered strong evidence of guilt. You people…

[QUOTE=chaos;20492659]The claim by his sparring partner has nothing to do with this fight, moron, as the fight gloves are new and supplied by the commission. The fact that you think someone would fight with their fist in the wrist of…

[QUOTE=Goldie;20490627]There are plenty of videos explaining how fury could’ve very well cheated with the glove......including a video testimonial from one of his own damn sparring partners. [/QUOTE] The claim by his sparring partner has nothing to do with this fight,…

[QUOTE=Goldie;20491954]“You have a racist mentality........you bring race up without any provocation” BLAH BLAH BLAAAAAH WAAAAA WAAAAA WAAAAA I’m black, life is so hard, take pity on me and condemn anybody who isn’t black for having the audacity to disagree with…

[QUOTE=Squared.Circle;20491846]My goodness you really are the epitome of victim mentality LOL are you my slave? No. Are you somebody’s slave? I presume not. Do I own a slave? Not since I let ya mam out my shed. SLAVERY IS OVER,…