Demetrius Andrade To Sign With Matchroom, Fight on DAZN

Two weeks after parting ways with his former promoters, Demetrius Andrade has a new one.

BoxingScene.com has learned that Andrade’s manager, Ed Farris, is in the process Friday of finalizing a promotional deal with Eddie Hearn’s Matchroom Boxing USA. As part of that multi-fight agreement, Andrade’s bouts will be streamed live in the United States on DAZN, the streaming service with which Matchroom recently partnered.

The undefeated Andrade’s deal is expected to be announced as part of a Matchroom/DAZN press conference Tuesday in Manhattan. Bob Arum’s Top Rank Inc. also has expressed recent interest in signing Andrade, who bought himself out of his contract with longtime co-promoters Artie Pelullo and Joe DeGuardia two weeks ago. 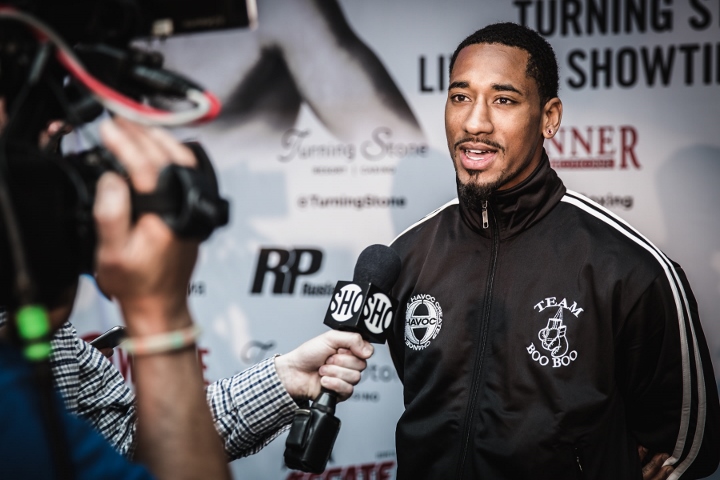 The 30-year-old Andrade (25-0, 16 KOs) is the WBO’s No. 2 middleweight contender and is in position to challenge WBO middleweight champ Billy Joe Saunders in his next fight.

The WBO ordered a Saunders-Andrade fight Thursday because Brooklyn’s Daniel Jacobs (34-2, 29 KOs), the WBO’s No. 1 middleweight challenger, agreed to a deal Tuesday to fight Ukraine’s Sergiy Derevyanchenko (12-0, 10 KOs) for the vacant IBF middleweight title either October 20 or October 27 in New York (https://www.boxingscene.com/jacobs-vs-derevyanchenko-done-deal-fight-october--129833).

The WBO gave Frank Warren, Saunders’ promoter, and Farris a 10-day window Thursday within which they could come to an agreement for a Saunders-Andrade fight. The WBO stated it would order a purse bid if Warren and Farris couldn’t reach a deal within 10 days.

Hearn could bid on a Saunders-Andrade fight if Warren and Farris can’t make a deal. It isn’t clear, however, if Andrade will pursue a fight against England’s Saunders (26-0, 12 KOs) or face another opponent in the first fight of his Matchroom/DAZN deal.

Before buying out his contract with Pelullo and DeGuardia, Andrade considered boxing Brazil’s Yamaguchi Falcao (15-0, 7 KOs) as part of an HBO tripleheader July 21 in Las Vegas.

[QUOTE=BennyBlanco;18950727]Hearn loves tuneups...that's his model. [LIST] [*]He talked up Brook vs. Charlo and Hurd before settling on BRANDON COOK. [*]He is trying to arrange Miller vs Szpilka, who has been KO'ed in 2 of his last 3 fights. [*]He offered…

[QUOTE=yammy25;18945357]Hearn isnt going to give him fat purses to fight absolute no names or be a duck.. he loves a duck does demetrius no doubt.. but like i said even i cant see him being so idiotic as to miss…

[QUOTE=Big dawg lani;18945339]You must not be seeing how this guy career is going He ducks all comp[/QUOTE] Hearn isnt going to give him fat purses to fight absolute no names or be a duck.. he loves a duck does demetrius…

[QUOTE=yammy25;18945289]And throw away mandatory world championship status against probably the weakest champ? Don't think even boo boo is that much of an idiot[/QUOTE] You must not be seeing how this guy career is going He ducks all comp

[QUOTE=BennyBlanco;18945266]Andrade fighting at least 2 tune-up fights before taking a real fight. Count on it.[/QUOTE] And throw away mandatory world championship status against probably the weakest champ? Don't think even boo boo is that much of an idiot