PROVIDENCE, R.I.—Depending on your viewpoint, Demetrius Andrade’s long overdue homecoming was either a statement-making performance or just another night in the office.

That statement was to bring him the head of Saul ‘Canelo’ Alvarez—and with his latest title defense for the most part putting something behind those words.

The unbeaten middleweight titlist checked off all the boxes in a 12-round shutout over Poland’s Maciej Sulecki in their DAZN-streamed main event Saturday evening at Dunkin’ Donuts Center in Providence, Rhode Island.

Scores were 120-107 across the board in favor of Andrade, who wasn’t at all shy about who he wants next. 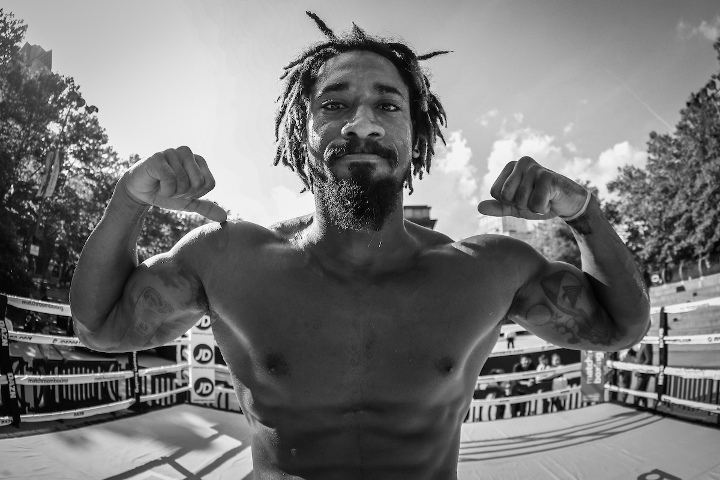 Andrade made a pre-fight promise to go straight after “that melon-sized head of” Sulecki and was true to his word. The unbeaten southpaw repeatedly scored with straight left hands, including a shot to send the visiting challenger to the canvas midway through the opening round much to the delight of the 7.136 in attendance for for Andrade’s first career fight at home.

Ever the brave ring soldier, Sulecki beat the count and was ready to fight. His night didn’t necessarily get any better, although he managed to avoid a second knockdown when top-shelf referee Eddie Claudio correctly ruled a slip after the two became tangled.

The rabid crowd of was riding a high although slowed down action in round two somewhat tempered emotions. Andrade boxed his way through most of the round, although still scoring with left hands whenever he let loose his money punch.

Sulecki tried to close the gap in round three but remained hopelessly outgunned in his first career title fight. Andrade was wild at times, perhaps a bit too eager to deliver a knockout ending for his adoring hometown crowd. He nearly delivered late in round three, hurting Sulecki with a left hand to drive him to the ropes, connecting with a right hook as well but with the challenger able to escape further punishment and make it out of the round.

Andrade boxed his way through most of round four, although a late flurry brought the crowd to its feet while nearly taking Sulecki off of his. It was as close as he would come to a stoppage victory, as the back half of the contest became more a boxing match.

“No excuses in there. I kind of felt something going on with my body during training camp so I utilized what I can and did what I did. I looked good doing it,” Andrade said of the mid-fight switch in strategy. “My legs were bothering me for a while after a few rounds.

“My dad told me to take it easy and told me to give them what they came here to see and that’s the sweet science of boxing.”

It was enough to pile up the rounds, as Sulecki never came close to win any of them. It never discouraged the Polish fans in attendance who remained as rabid by night’s end as they were prior to the opening bell. Their undying support, though, was drowned out by the New England faithful on hand in support of their three-time titlist in two weight divisions.

Sulecki never stopped trying to press the action but was outmatched in every skills department. The veteran middleweight tried coming forward, using lateral movement and even planting his feet in hopes of scoring with the type of right hand to dramatically turn around the fight. It would never come close to landing, as Andrade—sensing the knockout wasn’t coming—elected to pile up rounds and move on to the next one.

He moved well past Sulecki, who falls to 28-2 (11KOs). The Polish middleweight came in having won two straight following his lone career defeat, a 12-round loss to Daniel Jacobs last April. He entered Saturday’s contest on the heels of a thrilling 10-round win over Gabriel Rosado this past March in his opponent’s hometown of Philadelphia, Penn.

Sulecki was well on his way to a clear win, having scored two knockdowns and cruising along until getting dropped twice late in the fight. He survived long enough to escape with a majority decision and preserve his first career title fight, although it’s now back to the drawing board.

The win gave him the one alphabet title that wasn’t obtained by Alvarez in his win over Gennadiy Golovkin in their rematch last September. The hope now is to parlay that into a potential legacy fight with the Mexican icon later this year.

Alvarez—who is coming off of a clear 12-round win over Jacobs in their title unification clash this past May in Las Vegas, Nev.—remains without an opponent for a planned return in September. There are rumors abound of his moving up to light heavyweight to face three-time titlist Sergey Kovalev, though have yet to evolve beyond industry gossip.

Barring instant confirmation, the belief is that all relevant players are still in the hunt to land the plum assignment. That’s good enough for Andrade, who is prepared for the quick turnaround even after having fought for the third time in eight months.

“Forget the WBC s***. Whatever that ‘Franchise’ belt is,” stated Andrade, referring to the sanctioning body’s recent classification of Alvarez as its made-up “Franchise” champion at middleweight, freeing up a title for Jermall Charlo, who defeated Brandon Adams in his own Saturday night homecoming in Houston, Texas. “Let’s go, Canelo. Let’s unify this division.

“Let’s have one champion. It’s right here. Let’s do it. No more running, no more games. Let’s put it all on the line and see who is the best. Mano y mano. Viva Mexico!”

[QUOTE=hitking;19869912]I’m not gonna call Kovalev semi-shot. I think Kovalev is still a tough out for any current LHW, let alone a MW. As for the possibility of Canelo staying at SMW, I just can’t see it. I kinda compare anything…

[QUOTE=Southpawology;19870171]Andrade is a slightly more aggressive erislandy lara. That is all.[/QUOTE] - -Him and Lady Lara would make a lovely couple on the night as the First Ladies fighting in the men's division.

Andrade is a slightly more aggressive erislandy lara. That is all.

Think Andrade was comfy to just fight how he wanted and not really caring to look sloppy or silly. He wouldn't dare do that vs Saul or GGG.

[QUOTE=JWHardin;19869645]I think a fight between Andrade and Charlo would be awesome! Great fight, and the winner would definitely be in the driver's seat for a massive fight with Canelo or even GGG. If Canelo, for example, goes up to fight…