De La Hoya on Munguia's Win: That Was The Fight He Needed

Jaime Munguia waged a war over 11 rounds this past Saturday in San Antonio.

Gary "Spike" O'Sullivan and Munguia traded several shots over the course of the fight with the younger Munguia's doing most of the damage. O'Sullivan was able to withstand the punishment up until the 11th round when he finally hit the canvas.  At the same time his corner through in the towel which gave Munguia the knockout victory.

This was Munguia's first fight at the 160 pound middleweight limit.  The former super welterweight champion relinquished his title in December after struggling to make the 154 pound weight limit in his most recent title defenses. 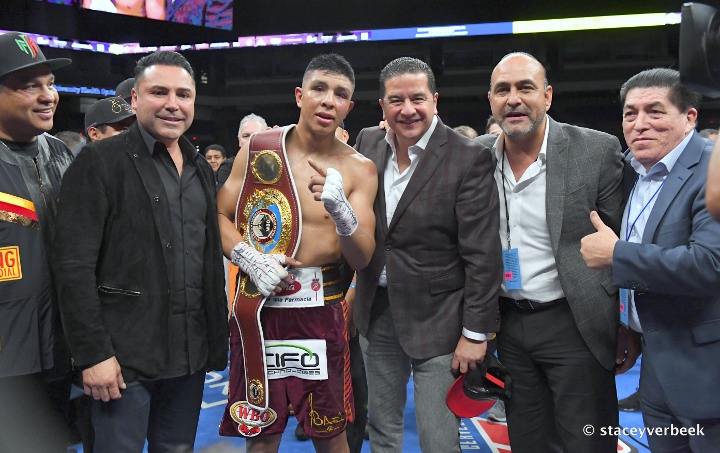 After the fight, Munguia's co-promoter Oscar De La Hoya of Golden Boy Promotions said that he was very pleased with his fighter's performance.

In the post-fight in ring interview, Munguia mentioned the name of Canelo Alvarez, Gennadiy Golovkin, and the Charlo brothers (Jermell and Jermall) as potential future opponents.

De La Hoya believes that in the very near future he will be in the ring with a big name.

"He needs the right fights. He needs the exciting fights that people want to see and as you heard he called out Canelo so he is going the right way," said De La Hoya.

Alvarez is slated to return to action on May 2nd with WBO super middleweight champion Billy Joe Saunders being mentioned as a front runner to be his opponent.

OLDH working this cub slowly as it's should be. Dennis Hogan rematch or The Hornet should be up next.

[QUOTE=Get em up;20323922]Any of the current champs will eat Mungia alive. He's way too green takes way too much punishment and forgets the basics every other round[/QUOTE] No doubt about it. He trades way too often with his chin straight…

I like this kid but he's not ready for the top 5 yet. I say wait another year. Get him used to the new weight class. 2 more fights before any big names.

Used to be a huge fan of Oscar the fighter. However I can’t even read a quote from Oscar the promoter with out boiling over. He is always either a cracky cheerleader or a cracky hater. Spike O’Sullivan was the…