De La Hoya: Jacobs Worries Me; 2nd-Best at 160 After Canelo

Alvarez’s promoter realizes just how big a threat Jacobs poses now that the deal is completed for Jacobs to challenge Alvarez on May 4 in Las Vegas. De La Hoya considers Jacobs, the IBF middleweight champion, the second-best boxer in the sport at 160 pounds.

De La Hoya, whose company once promoted Jacobs, is concerned because Jacobs can box well from a southpaw stance. Erislandy Lara and Austin Trout, both left-handed opponents, gave Alvarez two of the trickiest fights of his illustrious career. 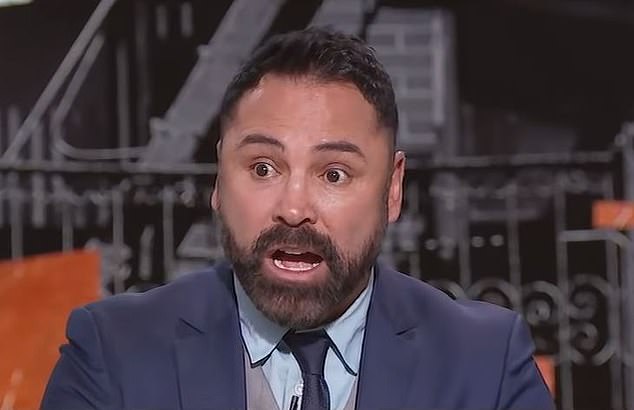 “That absolutely adds intrigue,” De La Hoya told BoxingScene.com on Thursday. “This is a pick-em fight. Daniel Jacobs, after Canelo, is probably the best middleweight around. There’s no doubt about it. He’s got speed and the willpower, and he’s hungry to win. This is a real fight and, if you ask me, it worries me. But that’s who Canelo is. I’m telling you, Canelo is the best fighter on the planet because he fights the very best.”

Alvarez announced Thursday through his Twitter account that a deal had been completed for him and Jacobs to meet in a middleweight title unification fight that DAZN will stream live, probably from T-Mobile Arena. They’ll fight for Alvarez’s WBA and WBC championships and Jacobs’ IBF crown.

In Alvarez’s most recent fight, the Mexican superstar knocked out England’s Rocky Fielding in the third round December 15 at Madison Square Garden. The 28-year-old Alvarez (51-1-2, 35 KOs) moved up to super middleweight for that bout, won the WBA world 168-pound title from Fielding and became a champion in a third division.

De La Hoya doesn’t think Alvarez will struggle while moving back down to middleweight to face Jacobs.

“He won’t have any issues whatsoever,” De La Hoya said. “He fought at 168 to crown himself a three-division world champion, which meant a lot to him. And we’ve always said and promoted that Rocky fight as, ‘Rocky’s not the best 168-pounder or the toughest fighter out there,’ and that was the truth. Now, Canelo has crowned himself a three-division champion, and he can move down to 160 and fight the very best again.”

2nd best at 160? Rob Brant might have something to say about that.

[QUOTE=Jab jab boom;19441784]this is exactly why I said [B]there is no clarity [/B]as to who the best is at mw.[/QUOTE] the fact that Pvssykin has been campaigning at middleweight for..... well, forever..... and yet there is still no clarity at…

Nothing pickem about this, you knock out Canelo they’ll still rule it a draw

[QUOTE=aboutfkntime;19441576]your convenient methodology applies DIRECTLY to Golovkin he absolutely falls into that line of thought 1) has never beaten a TOP fighter at 160 without controversy 2) has PILES of legit contenders who could be better just providing some context…

[QUOTE=alexjust;19441034][B]Is this your answer: a question[/B] in return? Really? We don't know what fight GGG is trying to make now. Who knows, he might have tried to make the third fight, but DLH in his vengeful spite lowballed him and…