De La Hoya: I Assure You That Canelo Will KO Golovkin in Trilogy

Golden Boy Promotions CEO Oscar De La Hoya has confirmed a third fight between Saul 'Canelo' Alvarez and Gennady Golovkin will happen – and predicts the judges will not be needed to settle the outcome next time.

Canelo picked up the WBA and WBC middleweight titles when ending Golovkin's unbeaten record last September, winning their rematch by majority decision after the first meeting had finished as a split-decision draw.

After a brief move up to super middleweight, where he stopped Rocky Fielding to claim the WBA 'regular' belt, Alvarez will be back in action at 160 pounds when he faces IBF champion Daniel Jacobs on May 4. 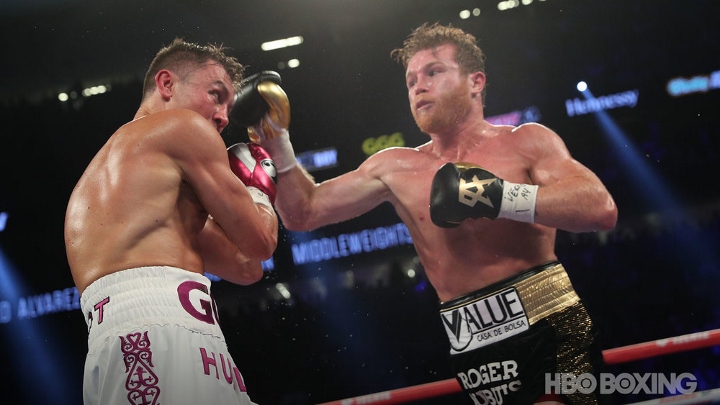 However, promoter De La Hoya – who guides the career of Canelo – is already planning ahead and believes Canelo will finish the argument inside the distance when, rather than if, he faces Golovkin again.

"There's no doubt whatsoever," he replied when asked whether the trilogy is going to happen.

"Canelo wants to fight the very best, and I can assure you that, third time around, Canelo will knock him out."

First, though, Mexican Alvarez must deal with Jacobs, who became the first fighter to take Golovkin the twelve round distance in losing a unanimous decision against the Kazakh in March 2017.

De La Hoya revealed how negotiations for the unification clash unfolded in an interview with DAZN during the card in Houston on Saturday, as he utilised the power of social media to seal the deal.

"[It was the] last second, the 11th hour," said De La Hoya. "I was one night tweeting and said to myself, 'how am I going to make this happen?'.

"I sent out a tweet that said we were going to talk to GGG and make the third fight happen and Jacobs' promoter, Matchroom Boxing, called [Golden Boy president] Eric Gomez the next day and said you have a fight with Jacobs.

"My plan worked – now we have one of the best middleweights fights in recent years."

[QUOTE=TonyGe;19474829]I was talking about the Canelo fight not the other ones. Reason I asked was another poster claimed there was a huge exodus of Golovkin supporters. That was when you joined in the conversation.[/QUOTE] I didnt pick a winner. I…

[QUOTE=Shadoww702;19474243]Boxing957 I have to go back and look? That was the latest. The other guy was on the Liam Williams/Smith fight. I got paid good on THIS site taking Canelo over. Vanes under 4 rounds paid the BEST Give me…

[QUOTE=Derranged;19474246]:lol1: Golovkin never looked hurt from any punch but let him believe what he wants. I've seen him post before and there's no sense arguing.[/QUOTE] Your screen name says it all 🤪

Nel o may ko ggg, but not because dlh predicted it. Just that if 2 people fight again and again anything can happen. Ggg might ko nelo.

[QUOTE=Diego Rodriguez;19473358]"Lucky to get out of that fight". . . . LOL. Only the haters such as yourself believe that. Yeah he really looked like he barely made it out of the fight in the last three rounds. Lay of…