De La Hoya: Canelo Has The Style To Disappoint Many GGG Fans

Oscar is fully confident about this date with destiny.

Canelo was presented with the WBC Diamond belt for his middleweight championship triumph. The ceremony was held at the Soumaya Museum in Plaza Carso, Mexico City.

De La Hoya stated: "Obviously and inevitably this fight between Saul and Gennady is going to happen, no matter what and we are confident that it will take place." 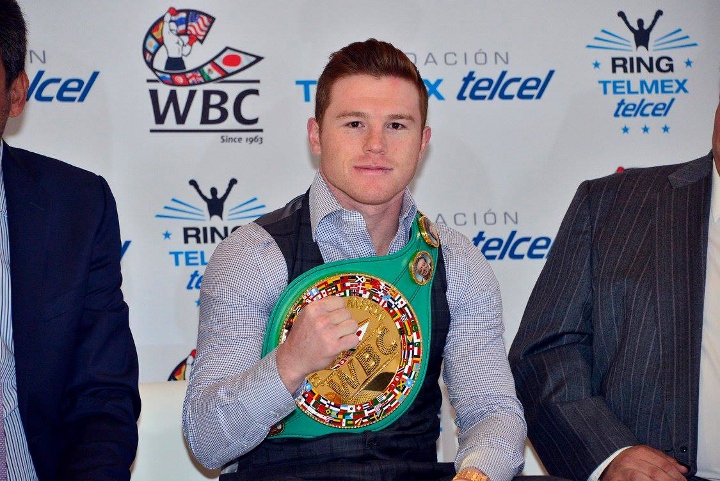 Assessing the game plan for the pair, Oscar mused:

"Gennady needs to come forward, pressure, throw a lot of punches and he'll have to be in great shape.  Canelo is strong, fast,  he's younger than Gennady,  and Canelo is getting better in every fight. We feel this is a fight like Hearns vs. Duran. Canelo has the style and the technique to disappoint a lot of Golovkin fans, when they face each other...and they will!"

Much has been made of the size and reach difference which tends to physically favor Golovkin, but Oscar countered this with the apt observation:

"Obviously strength is one thing, but ring generalship and ring smarts is another. When you combine this with sheer power, the way that Canelo has, Saul is a very dangerous fighter, who's now maturing into his maximum strength."

The two fighters will have interim bouts in the coming months. Golovkin, who also holds the WBA/IBO/IBF world crowns, will return on April 23rd - while Canelo is back in action on May 7th. Provided both win, they will face each other in the fall. If either fighter backs out, the offender will lose his WBC world title.

no doubt coz canelo's style is catchweight,....canelo=commercialized fighter...and it's too bad coz he's a good fighter

[QUOTE=aboutfkntime;16396050]Ward moved to LHW about 2 minutes ago, he has never even fought at 175. According to recent reports he is signed to fight Barrera then Kovalev. [B]Why did you suggest that Ward fight Stevenson or Hopkins [/B]? Why not…

Every time Oscar says stuff like that it usually happens otherwise!

[QUOTE=casheddie;16392797]Ward isn't a lightheavyweight the same way Canelo isn't a middleweight. IF YOU FIGHT IN CATCHWEIGHTS AND NEVER FACE A OPPONENT FROM THE DIVISION, THEN IT'S NOT YOUR DIVISION. [B]IF[/B] Ward had balls he would face [B]Adonis Stevenson or Bernard…