The way De La Hoya sees things he has rebuilt Golden Boy in the past and believes he is well positioned to do it again.

“We’ve persevered through everything,” De La Hoya told BoxingScene in an extended interview. “We’ve gone through hell back and guess what? We’re still here. Golden Boy has a boxing brand, a lifestyle brand. It’s stronger than ever. People have tried to take us down, tried to buy us out, but there’s no price tag on the potential of this brand. There’s no price tag and so whether people from outside the U.S., whether it's investors, hedge funds, whatever you want to call it, people with money with ulterior motives, with bad motives, you can’t take us down.”

De La Hoya was referring to when Al Haymon made a deal with then-Golden Boy CEO Richard Schaefer to buy the company with the plan to have it serve as the promotional entity for the Premier Boxing Champions outfit he would found.

Ultimately, De La Hoya decided he did not want to make the nine-figure deal and wanted to keep Golden Boy. It led to Schaefer’s acrimonious exit from Golden Boy and De La Hoya wound up in litigation with him and Haymon before reaching a settlement in 2015.

In the wake of the exodus of so much talent, many left Golden Boy for dead but De La Hoya and his team rebuilt the company.

Now, with Alvarez leaving as a result of settling a breach of contract lawsuit he filed against Golden Boy, De La Hoya and DAZN, his broadcast home, De La Hoya said he will rebuild once again with the company better positioned to deal with the loss of a single fighter -- even if Alvarez is such a mega star – than when it lost so many significant fighters in 2015.

“I’ve weathered the storm like you have no idea,” De La Hoya said. “You had people trying to get us out of the game. It’s a constant fight whether it was back in the day with Al Haymon, who tried to take over boxing. You know how that goes. It’s just interesting how we’re living it once again.

“(Canelo leaving is) one fighter and the way we see it is that when you’re a fighter who obviously is at the end of his career -- he’s not young guy, he’s not a guy who just started his boxing career like Ryan Garcia or Vergil Ortiz or like ‘JoJo’ Diaz or Jamie Munguia -- it makes it easier for us to roll our sleeves up and rebuild.” 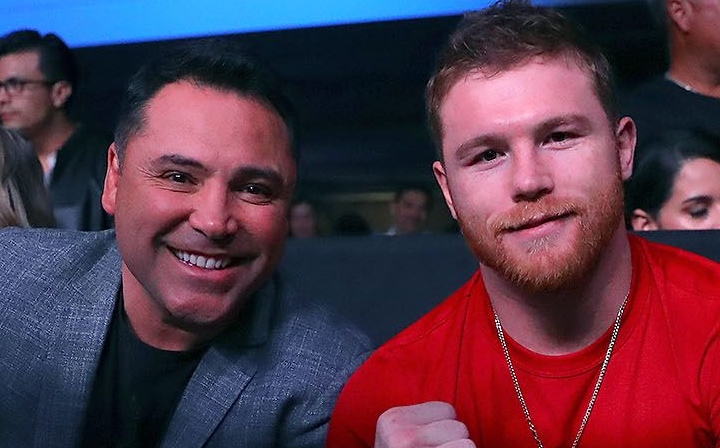 But even with De La Hoya’s positive attitude about his company’s future, he admitted that Alvarez’s exit was personally painful for him given their 10-year association, many good times and the many major fights he promoted for Alvarez.

“You never want to part ways this way. It literally hurt my feelings,” De La Hoya said. “I remember (Top Rank chairman and De La Hoya’s former promoter) Bob Arum once telling me when I was younger, ‘Don’t ever, ever make it personal with any fighter. Don’t ever make it personal.’ He obviously knows by experience. So I finally know what he’s talking about.”

De La Hoya said he could not pinpoint exactly what led to the fracture with Alvarez – the relationship was in bad shape for the past couple of years to the point where Alvarez wouldn’t even speak to him – but said outside forces were an issue.

“The big issue and problem for many fighters, and I have some experience, is all the whispers in your ears,” De La Hoya said. “Everyone whispering in your ears saying that you deserve more money, the grass is greener on the other side, we can do it better. The bottom line is that everyone who has been with us, every fighter who has been promoted by us, you know, that grass is not greener on the other side. It’s proven. And so the biggest problem was and will continue to be the whispers in fighters’ ears.

“That’s the problem. Fighters are so accessible unlike any other sport, like basketball, where they’re protected by their lawyers and agents. A fighter is so gullible and vulnerable that anyone can speak to a fighter and convince him that the grass is greener (elsewhere). I compare (the situation with Alvarez) to a marriage. Just because you have your rocky moments doesn’t mean you’re going to get a divorce. You have to work it out. We had a solid relationship and who knows where it went sour. Who knows what people talked in his ear, but the fighter is so gullible and so accessible to anybody that it makes it very difficult to have those long-term relationships with the elite fighters.”

Mexico’s Alvarez (53-1-2, 36 KOs) became a free agent and has his own Canelo Promotions, but plans to work with promoters on a fight-by-fight basis. Soon after his exit from Golden Boy, he made a one-fight deal with Matchroom Boxing promoter Eddie Hearn to challenge super middleweight world champion Callum Smith (27-0, 19 KOs), of England, on Dec. 19 at the Alamodome in San Antonio. It will mean a return to DAZN, where Hearn has an output deal, for at least one fight.

De La Hoya said he found it unusual that so soon after Alvarez reached a settlement to end the exclusivity he had with DAZN (as part of an 11-fght, five-year, $365 million deal that still had eight fights and $270 million on it), he is going back for one fight for far less money that the $35 million he was owed for his next fight under his contract.

“Who knows what kind of deal they struck. It was weird. It was odd,” De La Hoya said. “It’s the perfect situation where he’s gonna find out the hard way that the grass is not greener on the other side. (He will make) significantly less (than $35 million).”

Still, De La Hoya is a boxing fan and said he plans to watch Alvarez-Smith and believed Alvarez’s ring return is good for boxing.

“I love boxing, I’m a fighter first. Canelo is the biggest name in the sport right now, so absolutely, I will watch,” De La Hoya said. “He’s fun to watch.

“(There are) some big fights ahead of him, some dangerous fights ahead of him where he’s gonna face a Callum Smith. But you have to recognize that he’s not a young 30, all the wear and tear, all the operations he’s had on his body. So, that obviously takes it toll. But regardless, it’s great to have a Canelo fighting. He’s a high-profile name and it’s great for the sport.”

When De La Hoya was an active fighter he had his own falling out with Arum, left him and founded Golden Boy with Schaefer. He said the situation with Alvarez is not quite the same.

“I had a seven-year contractual relationship with Top Rank which I didn’t think was fair because it didn’t allow me to look at other markets, too look at other options because I was locked in for seven years, which, by the way, was an illegal contract,” said De La Hoya, who won a lawsuit in which the agreement was found to be illegal.

After time away from Top Rank, De La Hoya did make deals for Arum to promote some of his fights and even though they have had rocky times as rival promoters they get along well now and have made several deals to match their boxers.

De La Hoya said he would certainly not close the door on a reunion someday with Alvarez like he had with Arum.

“We are proven. We know when fighters leave us or fighters try to go and see if the grass is greener on the other side, we know for a fact that they are going to come back because we have the best business formula that does generate big numbers, that does promote events and give it high-profile visibility that it needs,” De La Hoya said. “I’m never closed to anybody.”