David Lemieux Sends Achour Down, Punishes Him For Decision

Centre Videotron, Quebec City - Former IBF middleweight champion David Lemieux (38-5, 33 KOs) failed to make the 160 limit on Friday, but he was still too good and too strong for Karim Achour (26-5-3, 4 KOs).

Achour, who had never been stopped, took a lot of punishment throughout the fight and went down in the twelfth and final round, but he still made it to the finish line. 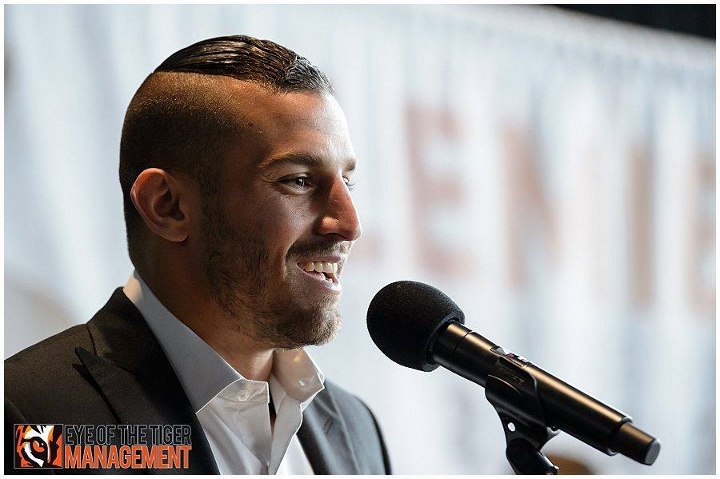 Lemieux may have possibly injured his left hand or shoulder in the final round while trying his best to finish Achour off.

Lemieux came in at 162-pounds on Friday and refused to squeeze down any further. His promoter and manager Camille Estephan of Eye of The Tiger Management, advised the local reporters that a move to 168 was very possible.

Lemieux bounced back after suffering a one-sided twelve round decision loss to WBO middleweight champion Billy Joe Saunders back in December.

In his last four bouts, Lemieux competed above the middleweight limit in two of them.

At just a shade over 163-pounds, Lemieux dominated Cristian Fabian Rios over the ten round distance.

He then came back, at the middleweight limit of 160, and scored a 'Knockout of The Year' victory with a third round demolition of Curtis Stevens in New York. Lemieux then decided to make a quick return in May, at 163-pounds, and won a ten round decision over Marcos Reyes.

On the undercard of Lemieux vs. Achour, junior welterweight Batyrzhan Jukembayev (13-0, 11 KOs) put away Jonathan Jose Eniz (20-9-1) in the seventh round.

In a battle of undefeated fighters, Custio Clayton (15-0, 11 KOs) won a twelve round unanimous decision over Stephen Danyo to capture IBF, WBO International titles. All three judges saw it 120-108.

Arslanbek Makhmudov (3-0, 3 KOs) blew away Elder Hernandez in the first round of a heavyweight fight.

Light heavyweight Erik Bazinyan (19-0, 14 KOs) took down Alejandro Falliga in the third round.

Yeah, he aint gonna survive at 168. Some dudes just need to lose weight and suck it up.

Disappointing he did not make weight this is due to a lack of discipline not size, at 175cm and not a very muscular build Lemieux should be thinking about a move to 154 if anything where his power could really…

Almost certainly has a fight with Canelo in his future, can't see him going to 168.

Look....like Jacobs get a nutritionist.. Get a trainer to teach you the Ken Norton block.. He gas a great Chin.. And can punch with the best of them. He has a body like Cannelo...without the people backing him.. And of…