Dave Allen Gutted Over Fight Falling Out, To Return in Coming Months

Dave Allen admits he is gutted after tomorrow’s planned fight with Christopher Lovejoy was forced to be cancelled.

Allen (18-5-2, 15 KOs) was due to face Lovejoy (19-0, 19 KOs) on the undercard of the heavyweight clash between Oleksandr Usyk and Derek Chisora, which is live on Sky Sports Box Office and DAZN. 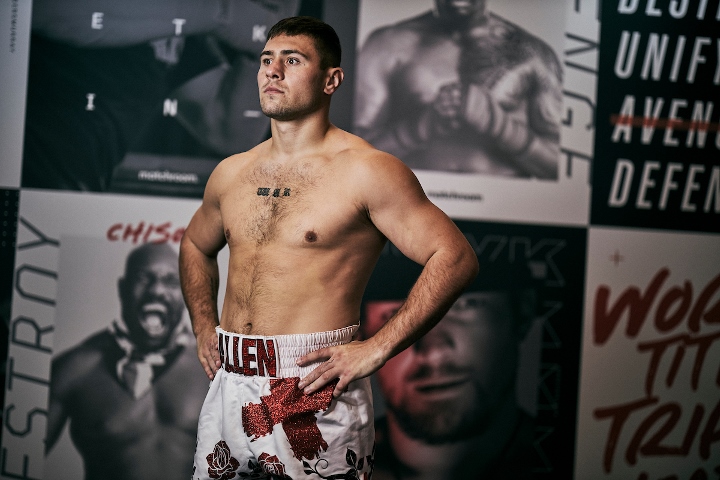 On Wednesday evening, a contractual issue with American opponent Lovejoy was discovered, which has forced the fight to be called off.

Lovejoy had not disclosed that he had an existing promotional agreement with Don King, who contracted event promoter Eddie Hearn with a complaint. The two were unable to reach an agreement for the fight with Allen to go forward.

Allen said: “I am gutted and sorry to say my fight with Mr Lovejoy will not be going ahead and I will not be fighting on Saturday.

“I am in maybe the best shape of my career but luck has not been in on my side, I have been told I will fight before the year is out and will start training for that this evening.

“I’m very sorry for letting people down but this is a situation well out of my hands.”

Tomorrow’s card will still feature Savannah Marshall, as she goes up against Hannah Rankin for the vacant WBO middleweight title.

[QUOTE=BigZ44;20849939]Sucks, was really looking forward to this one. Get the White Rhino in with Tom Little already[/QUOTE] Here is a good one you might laugh at... The reason Don King blocked this fight is because he claims Lovejoy the WBA…

Got to respect what Rick Taylor said. He's a man who's spent years in the ring, been hurt, been mash-up, come back over & again. Been through the fire man. Hasn't he?

Sucks, was really looking forward to this one. Get the White Rhino in with Tom Little already

[QUOTE=Mindgames;20849868]He's tough, I wouldn't call him a coward, but he doesn't put he's heart init boxing, I agree. He's just so lazy and half hearted, he's like the class clown, but it's just a front. He doesn't try he's hardest.[/QUOTE]…

[QUOTE=Rick Taylor;20849331]dave allen is a heartless coward. cant wait to see him get beaten up again. 😆[/QUOTE] He's tough, I wouldn't call him a coward, but he doesn't put he's heart init boxing, I agree. He's just so lazy and…