Danny Garcia On Pacquiao: Have To Beat A Legend To Be A Legend

Danny Garcia hopes Manny Pacquiao picks him as his opponent for his next fight.

Pacquiao hasn’t indicated who he’ll face when he returns to the ring either late in the spring or early in the summer. The Filipino legend could opt to box Errol Spence Jr. in what would be a bigger fight that’d earn the 41-year-old Pacquiao more money.

Spence said recently that he’ll come back around the same time Pacquiao is expected fight. The unbeaten IBF/WBC welterweight champion also stated that he doesn’t want a tune-up fight in his first appearance since suffering cuts to his face and dental damage during a one-car accident October 10 in Dallas.

Garcia (35-2, 21 KOs) would welcome a showdown with Spence, too, but the former WBC welterweight champion told BoxingScene.com recently that it “would be a dream come true” to face Pacquiao (62-7-2, 39 KOs).

“In order to become a legend, you’ve gotta beat the legend,” Garcia said. “You know, Manny Pacquiao’s had an incredible career. Being 40 years old and beating a prime Thurman, he’s had an incredible career. He’s somebody definitely all the boxers should look up to. And for me to get the opportunity to fight him, you know, you’ve gotta beat the legend to be the legend. And that’s how I look at it.” 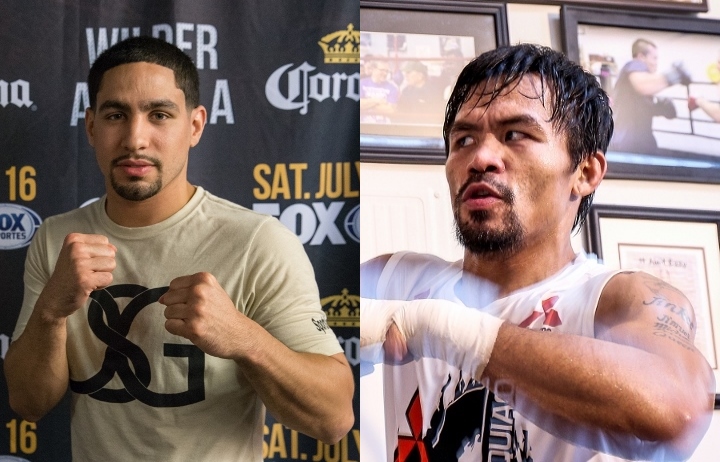 Philadelphia’s Garcia (35-2, 21 KOs) is preparing to face a lesser southpaw, Ivan Redkach, on January 25 at Barclays Center in Brooklyn. Assuming the heavily favored Garcia defeats Redkach (23-4-1, 18 KOs) in a fight Showtime will televise, Garcia wants an opportunity to do what his rival, Keith Thurman, couldn’t accomplish July 20 at MGM Grand Garden Arena in Las Vegas.

“That’s a big win,” Garcia said of Pacquiao’s split-decision defeat of Thurman. “He’s definitely a Hall-of-Famer. I just don’t know what he has left to prove, if you really think about it. Probably the money – that’s about it. But he’s a legend. He’s done it all, and he’s still here. So, someone has to get him out of there to get him to retire.”

“I wasn’t surprised because stylistically, it’s a good style for Pacquiao,” Garcia said. “It’s kind of like when he fought Cotto. Cotto’s the same type of fighter, uses lateral movement. And Pacquiao’s good at cutting the ring off, and he throws shorter punches. I knew that would be a difference. I knew whoever won the fight, it would be by split decision. And that’s what happened.”

Being Puerto Rico's only famous boxer is legendary itself

[QUOTE=champion4ever;20301283]Well if those are your sentiments then you would have to discredit Manny Pacquiao's win over Keith Thurman as a cherrypick as well. Afterall, Keith was coming off a two year layoff from an elbow surgery and in his very…

Beating an aging Pacquiao doesnt make you a legend. It wouldnt harm your argument if you want to be seen as a legend but there has to be a lot more substance than just that and Danny G has not…

[QUOTE=pasawayako;20302096]That old version of mosley almost knock out floyd.[/QUOTE] wasn't the same version of mosley. Pac fought him a year later coming off of a 1 sided loss to mayweather and a draw to Sergio mora. He was clearly washed…