Crawford vs. Brook To Air Live on Premier Sports 1 In UK

A potential last stand for a longtime box-office attraction in the United Kingdom now carries a domestic broadcast partner.

The forthcoming showdown between three-division and reigning unbeaten welterweight titlist Terence 'Bud' Crawford and former titlist Kell Brook has been picked up by Premier Sports in the U.K., Top Rank announced on Monday. The bout—which takes place November 14 in Las Vegas—will air live on both sides of the pond, carried on ESPN in the United States and Premier Sports 1 for the viewing pleasure of British boxing fans.

“We are delighted to partner with Top Rank and broadcast this massively anticipated fight next month," stated Richard Sweeney, CEO of Premier Sports. “There is huge interest in this event from fans in the UK, and we’re pleased to make it live and exclusive to Premier Sports customers.” 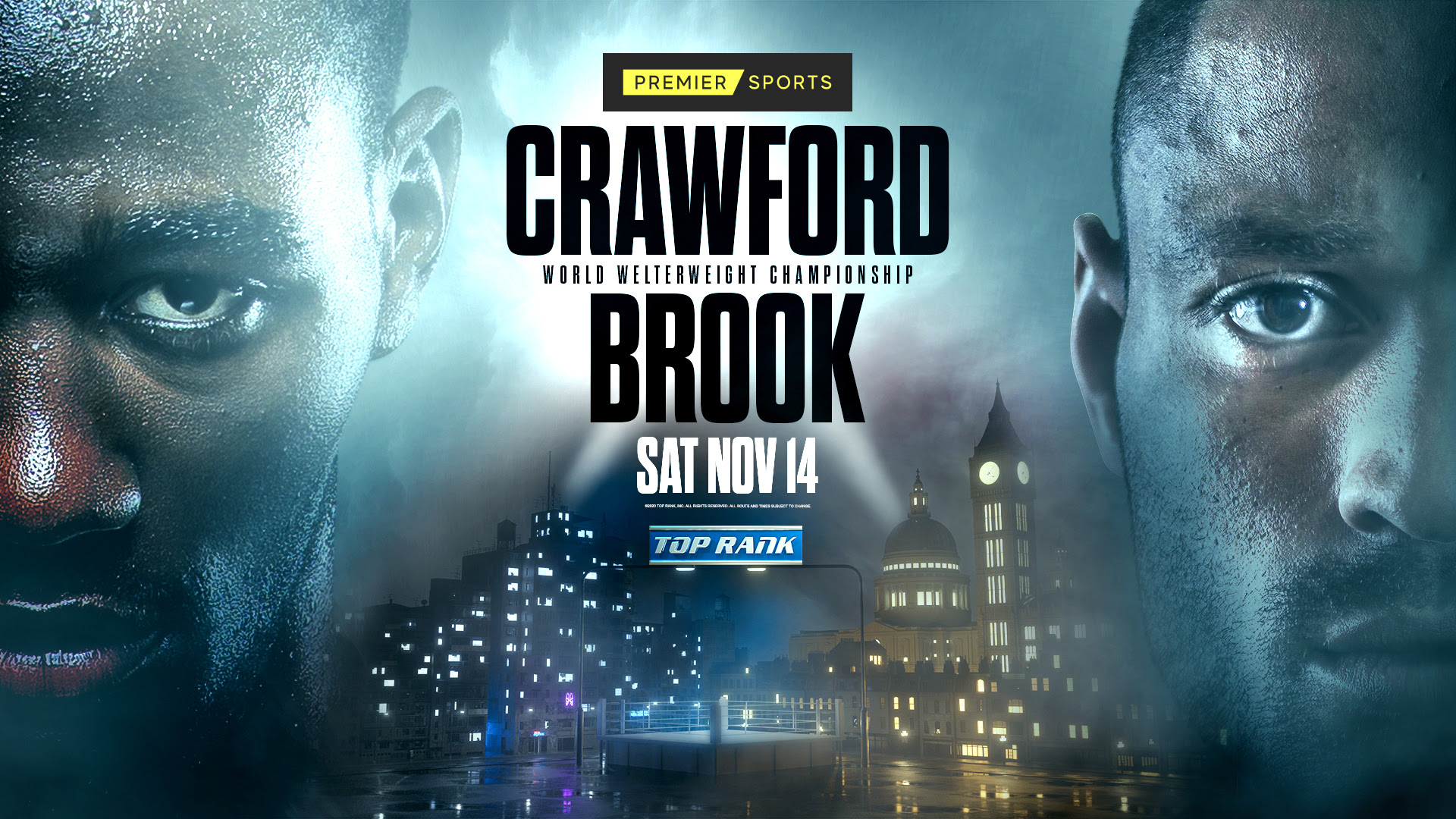 Brook (39-2, 27KOs) returns to the welterweight division for the first time since conceding his title to current unified titlist Errol Spence (26-0, 21KOs) in their May 2017 thriller. Their bout took place in front of a massive crowd in Brook's hometown of Sheffield, England, where he has emerged as one of the nation's biggest draws.

Proof of his star power remained evident in his most recent ring appearance, a one-sided 7th round stoppage of overmatched Mark DeLuca this past February in Sheffield which has housed six of his last eight starts. Brook will now return to the U.S. for the first time since August 2014, when he outpointed then-unbeaten Shawn Porter in Carson, California. The win netted Brook a welterweight title which he held for nearly three years, with his reign and the majority of his career airing live on Sky Sports platforms.

That will change for this event, though not at all dampening his enthusiasm.

“I am delighted to announce that my fans across the UK will be able to watch me fight Terence Crawford for the welterweight world title LIVE on Premier Sports,” insists Brook. “It’s bonfire season, and I’m going to be bringing the fireworks, so make sure you subscribe and tune in to watch me become two-time world champion, baby!”

Crawford (36-0, 27KOs) was just getting started as a lightweight titlist at the time. The pound-for-pound boxing superstar from Omaha, Nebraska would finish the year as the lineal 135-pound champion, eventually claiming such honors at junior welterweight before moving up to welterweight where he has held a title since June 2018.

The upcoming showdown versus Brook will mark the fourth attempted title defense for Crawford, with the entirety of his reign carried on ESPN platforms. Varying overseas platforms have stood in line to carry his events, with U.K. coverage becoming a point of contention for several recent boxing events carried by Crawford's longtime promoter Top Rank.

Just as the matter was resolved for the company's presentation of Teofimo Lopez's lineal lightweight championship win over Vasiliy Lomachenko earlier this month, Top Rank comes through in delivering its other blockbuster pound-for-pound star.

“I commend Premier Sports for stepping up to broadcast Crawford-Brook,” stated Bob Arum, Hall of Fame promoter and founder/chairman of Top Rank.“Terence is a generational talent, and I strongly believe Kell has the skills to give him a tremendous challenge.

“The UK boxing fans deserved an outlet to watch this fight, and thanks to Premier Sports, they will have an opportunity to do so.”

According to its website, Premier Sports is available via subscription on Sky and Virgin platforms to 16 million homes in the U.K. and the Republic of Ireland.

Sky Sports boxing is an utter joke. Showing matchroom crap like womens (cheap)tripleheader card three ****e PPVs before xmas and ignoring the Loma, Davis and Brook fights. Adam Smith and Eddie Hearn can **** right off. BT Sport too but…

This will be a walk in the park for TC... a finished job much cleaner than Spence, TC won't have to use his head for butting like Spence did to win vs Brook...

Didn’t even know Premier Sports still existed. They used to show the 168 Super Six on there.