IBF lightweight champion Richard Commey is a very interested party in the outcome of  Saturday's fight between WBA, WBO champion Vasiliy Lomachenko and challenger Luke Campbell of the UK.

The vacant WBC title will also be at stake when Lomachenko and Campbell collide at the O2 Arena in London.

Commey, who is likely going to face mandatory challenger Teofimo Lopez at the end of the year, wants the winner of that bout. 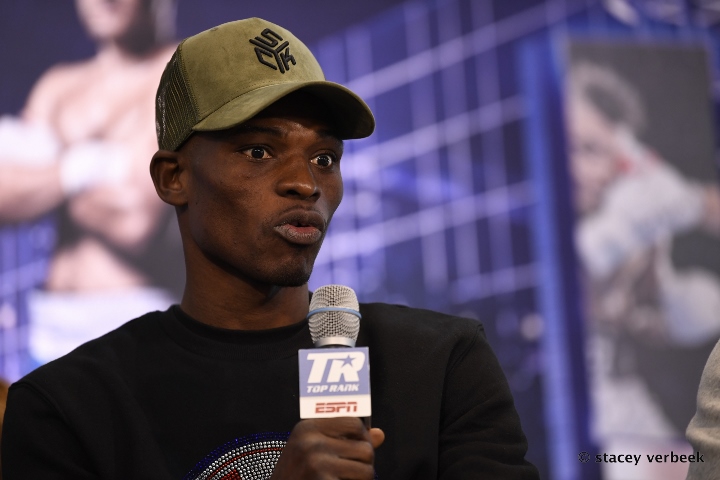 While Lomachenko is a huge favorite to win, Commey views the contest as being much closer in terms of skill.

He gives Lomachenko the edge to win, but only a slight edge.

"It's a very interesting fight if I'm being honest," revealed Commey to Sky Sports. "They are both Olympic champions who have a very high amateur pedigree, add to the fact that they are both southpaws it makes this match up very intriguing for me.

"I am edging towards Lomachenko simply because of a line through [Jorge] Linares whom both have fought which gives Loma the slight edge but in saying that, Shane McGuigan is a very astute trainer and I respect him a lot as a coach and he is more than capable of coming up with a game plan to surprise everyone."

While Lomachenko regards himself as the best pound-for-pound boxer in the sport, Commey disagrees with his position.

"I don't believe he's the best fighter in boxing by a long way. He has a tremendous amateur background, but this is professional boxing, they are two different sports. Personally, I think Canelo, Crawford, Spence and Wilder are above," Commey said.

"There is a lot to be said about being the A side all of the time you have a distinct advantage when the promoter, TV network, journalist and everyone else sings your praises. Crawford went and took the belt off Ricky Burns in his own backyard and Spence done the same to Kell Brook, Canelo was the B side against Mayweather and Wilder was prepared to go the Russia to defend his title."

[QUOTE=j.razor;20034284]Uhh Gassiev, Breidis and Huck all wack. Porter beat ugas. I say if cuz you never know but of course I would bet Errol wins.[/QUOTE] Not a very sharp razor, I see.

[QUOTE=steeve steel;20025509]Uhh... Gassiev, Breidis and Huck... Brook has one MD against Porter. That's it. And if Spence gets past Porter?? You're kidding right? You have doubts? Did you see the fight he lost against Ugas? Spence is the same size...…

[QUOTE=ShoulderRoll;20021203]Not really. They have different styles and skillsets. And as we know the Mexican style already gave Lomachenko fits and handed him his first loss.[/QUOTE] Not really, dubious decision and a record amount of low blows, there is nothing canelo…

[QUOTE=Mister Wolf;20022852]Does anyone think Loma at 135 could have beat the 135 version of Crawford? What about the other current lightweights. Could any of them beat 135 Crawford?[/QUOTE] DOn't know. But that would have been an amazing fight.. No one…