Colbert: We're Looking For Leo Santa Cruz at The End of 2020!

A highlight reel one punch knockout of Miguel Beltran Jr last September was the perfect way for Chris Colbert (13-0, 5 KOs) to cap off a productive and reputation enhancing 2019.

Four fights, four wins, two early and two on points kept the 23-year-old Brooklynite busy and took him from fighting in his home borough to the likes of Minneapolis, Las Vegas and Bakersfield. This Saturday the charismatic super featherweight looks to kick off 2020 with a bang by bagging the interim WBA world title against former world champion Jezzrel Corrales in Philadelphia live on FOX and in the U.K on Boxnation.

Whether you know of Colbert because of his skills, his colourful hair or his nickname [Prime Time] he is ultra confident that by the end of these 12 months you will know him because he is a champion. And Colbert hopes that respect comes as part of the package should he become a fully recognised world champion.

“I feel like the boxing game is not going to appreciate the talent I got,” said Colbert when Boxing Scene reminded him of a quote he mentioned in another interview with AB Boxing News where he said: ‘I don’t believe they’ll appreciate my talent until I become a world champion’.

“One, because I’m not knocking people out cold,” he began explaining “and two because, I guess, I don’t even know what the second reason is but I honestly don’t feel like they appreciate my boxing style but I’m just going to have to prove them wrong every time. When I become unified world champion, whatever division that is, then they might respect me.” 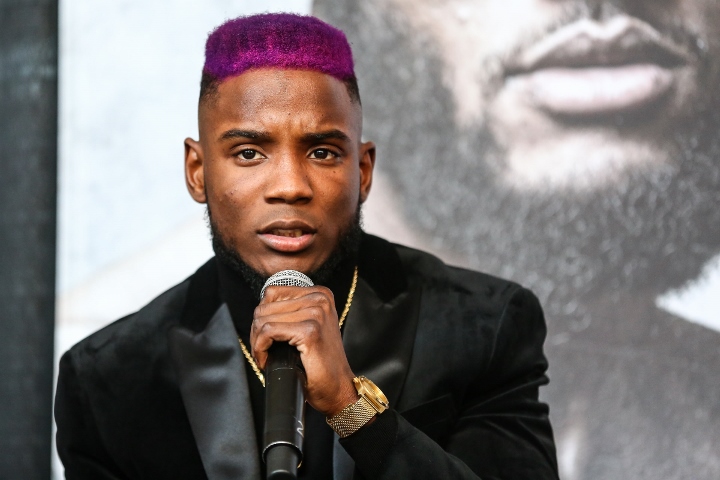 They could be the media, other fighters, fellow fans or the sport in general and while there is no bee in his bonnet, there is a spark in him that gets lit when you talk about respect.

“I mean in life of course I want people to respect me but it comes with the territory, it comes with the game. You’re not going to be liked and loved and respected by everyone but that just adds more fuel to my fire, to know that I have to show up, to put a show on and a great performance so they gain some type of respect for me no matter what. If I keep going in there and doing what I’m doing with these opponents, that they say will give me a hard fight -  that they say should beat me - then it’s only right for them to say damn, this kid can fight.”

Colbert can fight, make no mistake. The stunning KO of Beltran wasn’t expected. His Mexican opponent had previously went the distance with Miguel Roman, Rocky Martinez and Yuriorkis Gamboa. Colbert isn’t a KO artist, however. Fans and viewers shouldn’t be expecting more TV fireworks on Saturday night. In fact, nearly three quarters of Colbert’s opponents have heard the final bell.

“If you were a real true fan of me, and you know how I fight, you wouldn’t expect a knockout. But that’s only one thing I can tell you, but another thing I can tell you for sure is in 2020 they can expect an ass beating and come Saturday night that’s what I’m gonna do. If the knockout comes it comes. If it don’t, it don’t. I just gotta go in there and do what I gotta do and get the victory by any means necessary.”

A win against Corrales, the interim title in his possession, gets him a step closer to the divisional top dogs at 130lbs. And Colbert wants to go one on one with one guy in particular.

“I can’t say he’s the top dog at 130 but he is up there. He’s up there because he’s got a world title, but that’s just the belt and the rankings for the WBA. We just going to stay focused on that, keep my eyes on that prize so I get it then I’m looking to unify right away. The fight I get after my WBA World championship will be one where I’m looking to unify right away. I’m not looking to play games. Not looking to chase down people, let’s unify. Whoever got them belts I want them all.”

And because Colbert was speaking to a British boxing writer it would have been remiss of me if I didn’t mention Carl Frampton during our conversation, specifically when discussing the potential of Colbert facing ‘The Jackal’ should he defeat Jamel Herring in their proposed summer showdown for Herring’s WBO title at 130lbs.

“Listen, I wanted to fight Carl Frampton last year but things weren’t going as planned, I didn’t have enough fights and all of that, you know the boxing politics. Carl Frampton... he’s a great champion and I love the way he carries himself in and out of the ring but it’s my time. I’m coming. If Carl Frampton wants to take it to the UK then we go to the UK. I don’t need fights close, I beat people wherever they are at and that’s what I’m going to keep doing.”

I've heard people saying he's overhyped and not that I heard much hype around him other than the Netflix documentary Counter-Punch.... But he doesn't really seem like anything special. To me anyway.

Stay in your lane kid. What you have to do is look impressive tonight. That way you make yourself worthy for such a fight.

Try not to slip on the Corrales banana skin first.