Coach: Broner will be biggest boxing star after he beats Pacquiao

Team Broner is very confident heading into their January 19th showdown against future Hall of Famer Manny Pacquiao (60-7-2).  The pay-per-view card takes place at the MGM Grand Garden Arena in Las Vegas and will be distributed by Showtime.

Odds makers currently have Pacquiao listed as a 3-1 favorite but Adrien Broner's (33-3-1) trainer Kevin Cunningham believes that the Filipino Senator is in for a surprise when they meet in the ring.

"I think it is going to be a tremendous fight. I need AB is as ready as he could possibly be. This has been one of his best camps of his entire professional career. He is ready to beat Pacquiao and look spectacular in the process," Cunningham told BoxingScene.com. 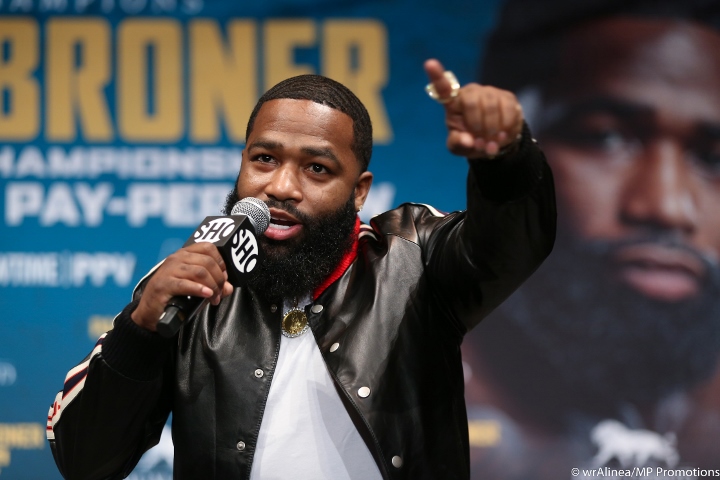 The 29-year-old Broner fought once in 2018 when he battled former two-division champion Jessie Vargas to a draw in April. Vargas got off to a quick start in the fight but Broner closed strong to earn the draw.

Pacquiao also fought once last year and scored his first knockout victory in nearly 9 years when he stopped Lucas Matthysse in July in Malaysia. With the win he also captured the WBA welterweight title.

Broner is a former four-division champion and has a huge social media following. Cunningham believes that Broner will become the biggest name in the sport with a win on the 19th.

"I think this fight is huge and has huge ramifications. This is AB's first pay-per-view. The winner of this fight has the pick of the litter in the division. It is just huge from every angle and that is how we prepared for this fight," he stated. "This is the biggest fight of his career. That is how he is taking it and how the whole team is approaching it. Me personally, I think when AB beats Manny he is the biggest star in boxing."

He won't become the biggest star in boxing but he will anger alot of cult like pac fans. For that reason alone I hope he wins.

lol....."about billions" was the self-proclaimed next ppv star of boxing years ago til Maidana whoopd that ass and put him in tears!! finally gets his 1st ppv thanks to 40 yr old Pac.

A big if! And if so, very undeserving! AB has been recieving gifts for a while. I.E. pulling a draw from Jessie ( always a draw ) Vargas. Whom, the more I watch that fight the more Vargas wins. Anyway…

Broner will boxing's biggest star? i thought we were in january 2019, i guess this is actually january 2013. tell your boy to avoid fighting maidana then

[QUOTE=dwayne3534;19423688]That's so true. You know how many times I hear who was that Mexican dude that kod Pacquiao?[/QUOTE] Damn shame. Superstars, for better or worse, have to get casuals attention.