At 30-years-old, the Englishman Eubank Jr. (29-2, 22 KOs) said he’s at the age in his career where every fight needs to be a make or break one. He’s doubled down and enlisted Roy Jones Jr. as his trainer and is ready to come out guns blazing after the coronavirus pandemic is over.

“I want the big names. I want the belts. That’s what I want over the next 12 months. I’m ready right now. I’ve been training,” Eubank Jr. told BoxingScene.com in an interview. “I would love to fight Gennadiy Golovkin right now. That would be an amazing fight. He’s still a very dangerous fighter. I think he won at least one of the Canelo Alvarez fights. You can’t ever underestimate a fighter like GGG, with his experience and power. I tried fighting him years back, but he fought Kell Brook instead. That fight was taken away from me, and it’s a regret.

“I know Canelo Alvarez has some other people in mind, but I would love to fight him as well. Who knows what’s going on with him and the weight division he wants to fight at. I also have a rivalry with Jermall Charlo that started up during our last fight at the press conference. There were words exchanged, but I know I can beat him and take him out.” 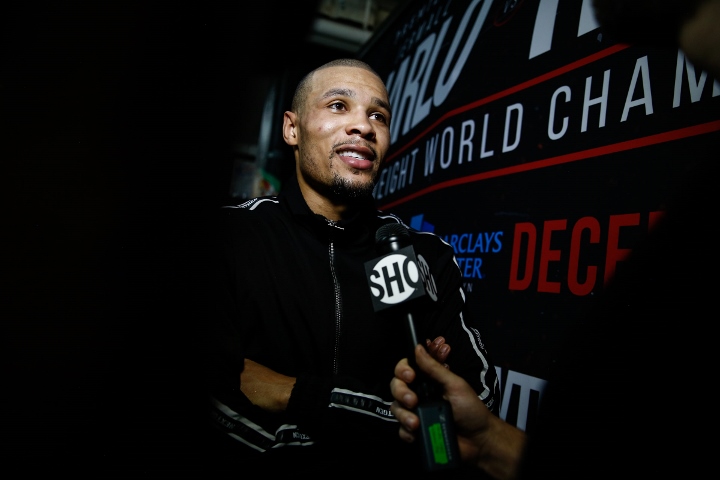 Eubank Jr. is also eyeing a fight with WBO middleweight titlist Demetrius Andrade. Andrade is having a hard time finding credible dance partners, and Eubank Jr. could be the strong name that he’s long been looking for.

Eubank Jr. most recently made his U.S. debut in December and scored a second round TKO win over Matvey Korobov.

“The unfortunate thing for me is that I’ve only had one round of professional boxing since February 2019,” said Eubank Jr. “Would a non-title fight [after coronavirus] be a good thing before I challenged for a world title? Probably. I wouldn’t say no to it. If the opportunity presents itself for a world title, I’ll take it, because that’s what I want. I’m 30-year-old now. I need the big fights.”

If he really wants it, then he should let an actual promoter/manager look after his interests and not let his dad anywhere near the negotiation. Last time the old man ****ed up his chances of getting the Golovkin fight, then…

[QUOTE=Uncle Al..varez;20562472]Please. Eddie Hearn, in all his interviews I’ve seen (including those Barbershop Conversation rants) did Lil Eddie talk in disgust about the Eubank’s. That’s Lil Eddie trying to wear his father’s jock against Eubank Sr. It’s obvious Eddie Hearn…

[B]This clown couldn't even be George Groves![/B] He's never wanted dangerous fights and never will. He's just like B.J. Saunders. These British frauds talk much better than they fight. Eubank Jr. is quickly becoming the British version of Chavez Jr.…

[QUOTE=Uncle Al..varez;20562459]In 3, 2, 1.... Haymon creates smoke and mirrors with DAZN fighters when Charlo vs Eubank Jr. is the most ideal fight on PBC[/QUOTE] Charlo or your uncle Al shouldn’t be afraid to take this fight I wish Charlo…