Dillian Whyte is pushing hard to land a world title shot in his next ring appearance.

In 2018, Whyte had a banner year with big victories over Lucas Browne, Joseph Parker and Dereck Chisora. 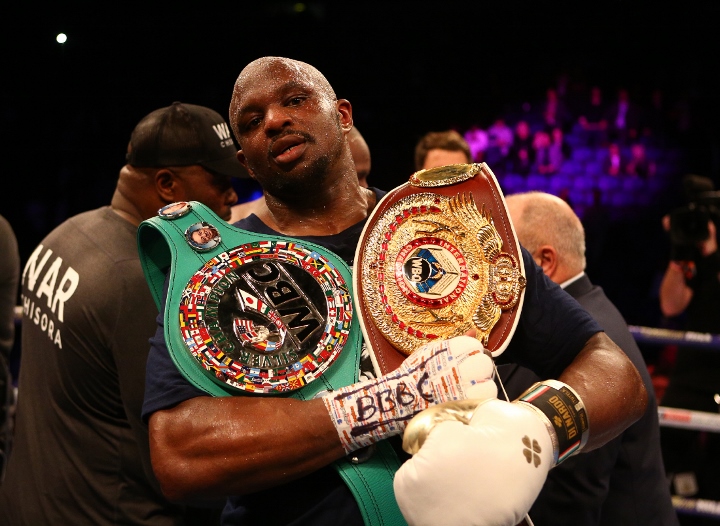 Last Saturday night, Whyte scored a brutal eleventh round knockout over Chisora in their anticipated rematch at the O2 Arena in London.

The victory placed Whyte in line to fight Joshua in a high stakes rematch on April 13th at Wembley Stadium.

The only thing standing in Whyte's path, is the possibility that Joshua would face Wilder in a unification - but that scenario is unlikely.

“I’ve said this before. I think Dillian should get his world title shot. When he won the WBC Silver [belt], it’s been two years now. I don’t know why he hasn’t boxed for it but I think he deserves his shot. He deserves it but I think everybody wants to see that fight Deontay Wilder versus AJ [Anthony Joshua]. If that happens then you’ve got [Tyson] Fury in the mix as well… Eddie [Hearn, Whyte’s promoter] has to fight for Dillian to fight for a world title,” Chisora told Boxing News.

And former world champion David Haye, who is Chisora’s manager, agrees with his fighter.

“After Dillian’s last three fights, Lucas Browne, Joseph Parker and Dereck Chisora, if any of the contenders outside of AJ, Fury and Wilder, I believe he’s proven that he deserves the next shot at a title,” Haye said.

“I can’t see any other heavyweights outside of Dillian right now who deserves a world title shot more than he does. He’s put it on the line. He didn’t have to fight [Chisora] but he did and he did great.”

[QUOTE=Dramacyde;19391140]He needs to fight Ortiz or Miller to earn his shot[/QUOTE] And why is that? What have they done that he needs to go through them?

Ortiz has not won anybody to deserve a shot. I rather see Whyte-Breazeale than Ortiz. Fanboys wanna use use Ortiz to assess Whyte's shot at Wilder.

Ortiz and Miller need to fight each other: as stated Whyte has done more than enough. As well as facing good opposition he has brought in big money for himself and Ortiz wanted some of that. Whyte did not go…

[QUOTE=Dramacyde;19391140]He needs to fight Ortiz or Miller to earn his shot[/QUOTE] Why? What is so special about those two? Why are they gatekeepers? Whyte deserved a shot, couldn't agree more with the article. I doubt he will beat either AJ…

Quite simply, 3 into 2 doesn’t go, whatever happens with Fury / Wilder / Joshua, the odd man out should fight Whyte. I don’t get the arguments for Whyte “needing” to fight anyone else to get a title shot, he’s…