Jermell Charlo and Tony Harrison gave boxing fans plenty of reasons to remain engaged throughout their title fight rematch, and with the final ratings to prove it.

The thrilling 154-pound sequel which topped the December 21 edition of Premier Boxing Champions (PBC) on Fox drew an average audience of 2.223 million viewers, landing as the second most-viewed boxing match of 2019 according to Nielsen Media Research. The year-end Fox telecast peaked at 2.233 million viewers, coming at the end of Charlo’s revenge-fueled 11th round stoppage of Harrison to avenge his long career defeat.

Both figures rank as the second best of the year, with Keith Thurman’s 12-round nod over Josesito Lopez atop the January 26 edition of PBC on Fox averaging 2.48 million viewers and attracting a peak audience of 2.765 million viewers. 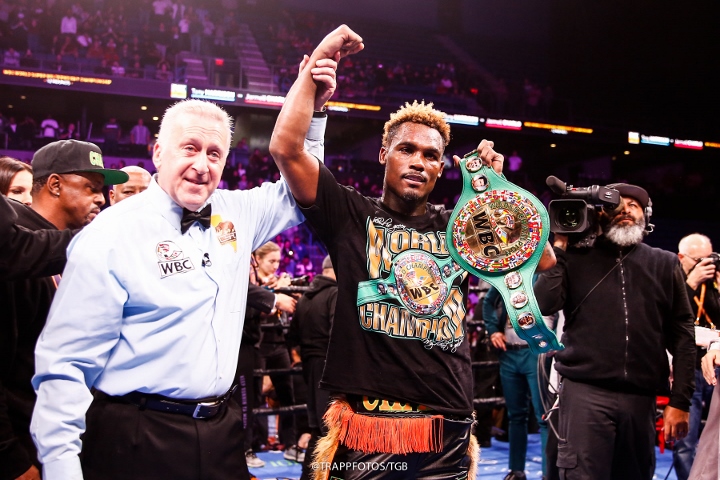 The three-bout telecast averaged a combined 1.85 million viewers across all Fox Sports linear and digital platforms, including 1.65 million on Fox prime. Another 189,000 viewers watched via Fox Deportes, while Fox Sports’ streaming service carried an average minute audience of 11,317.

The three-fight average is down 16% from the 1.971 million viewership average for the PBC on Fox tripleheader on this very weekend one year ago. That show featured Harrison-Charlo I—with Detroit’s Harrison (28-3, 21KOs) scoring an upset—and disputed—12-round win over Houston’s Charlo (33-1, 17KOs)—in a supporting bout to Jermell’s twin brother Jermall Charlo’s hard-fought unanimous decision over Matt Korobov.

The rematch was the only title fight featured on Saturday’s tripleheader, which as a whole ranked as the second-most watched telecast of 2019 (again, only trailing the Thurman-Lopez topped Jan. 26 show).

Saturday’s telecast was the 10th and final of the year for Fox prime, which averaged 1.403 million viewers per telecast. The figure is up 12% from the series average one year ago—although with all but one of the telecasts in 2018 coming via a separate arrangement prior to PBC scoring a lucrative, long-term deal with Fox Sports—and also well outpacing any other boxing platform on the year.

By comparison, PBC on Fox performed 103% better than the year-long average for Top Rank Boxing on ESPN, which averaged 692,000 viewers per telecast, and also 35% better than the average audience for UFC’s first year of its Fight Night series on ESPN.

Saturday’s main even was delayed by six months, as it was due to take place this past June. Harrison was forced to withdraw due to an ankle injury, leaving Charlo to occupy the June 23 main event in an early blowout of late replacement Jorge Cota, which averaged 1.832 million viewers.

The trio of strong ratings pulls for Charlo—coupled with his title-regaining effort—comes ahead of the nexf PBC on Fox headliner also focusing on the 154-pound division, with reigning unified titlist Julian ‘J-Rock’ Williams defending his crown versus Jeison Rosario on January 18 in his hometown of Philadelphia, Pennsylvania.

[QUOTE=KillaMane26;20281815]Yeah really dude shuda just kept his mouth shut, those guys got hella light sentences. If. wasnt gonna get that max. Sentence they were scaring him with. If he kept up his image and got out. Dude would be big…

[QUOTE=_Rexy_;20281800]Oh I know the story, and blame goes on the little rat 100% people say it’s not his fault he got extorted but ****, stay in your lane. Nobody made you put gang members in your video because you wanted…

[QUOTE=KillaMane26;20281787]Me too, he looked sooo bad, then it was funny when his brother showed up n asked him he that look on his face like "he wouldn't have did that to me" But i would like if all dudes keep…

[QUOTE=_Rexy_;20281771]Yeah that [B]Jacobs thing left a bad taste in my mouth[/B]. And even if they low ranking bloods (which I doubt, but who knows) they shouldn’t be throwing signs at a press conference. Everyone wanna be about that life until…