CARSON, Calif. - A celebration and a parting goodbye all rolled into one.

It was another dominating performance for Braekhus, who has become a household name in Norway and was fighting for the second time on HBO.

Tonight’s fight card was the final HBO telecast after over 45 years of airing live boxing. The first fight that aired on HBO was George Foreman’s second round knockout victory over Joe Frazier in January of 1973.

Braekhus’ win over Lopes marked the 1,119th and final fight on HBO.

After an even opening round, it was easy work for Braekhus as she landed the more effective punches throughout the fight. The 37-year-old connected with several left-right combinations to the head, causing Lopes’ face to redden with each passing round.

Braekhus momentarily shook Lopes with right hand to the head midway through the fifth round, but Lopes was able to make it through the round. 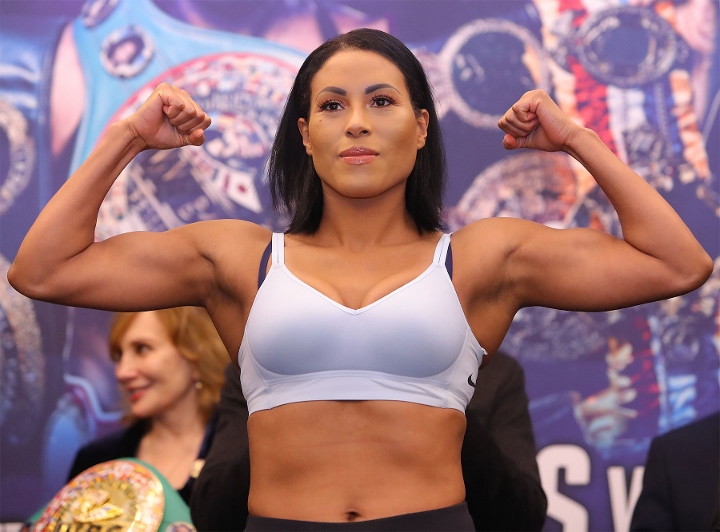 Braekhus continued to batter Lopes in round six, connecting with more left-right combinations to the head.

“I wanted to knock her out,” said Braekhus after the fight. “I wish I was more relaxed that maybe it would have happened. I was a little eager. This was a historical night so it may have thrown me off.”

Lopes looked discouraged by the eighth round. Any offense she would throw would land on the shoulders of Braekhus or she would get hit by a lead or counter right hand to the head.

Lopes did find some success initiating exchanges during the last two rounds, allowing her land first, but those exchanges were few and she was still fighting defensively as Braekhus was content to counter to the head and body.

Lopes, who is originally from Poland and now resides in the Boston suburb of Marshfield, drops to 18-5-3, 1 KO.

Braekhus’ last fought on HBO on May 5, which was a decision win over Kali Reis, but Braekhus was dropped in that fight. Braekhus attributed that to not having trainer Jonathan Banks in his corner during training camp.

“This time (tonight), I had my trainer in this camp,” quipped Braekhus.

There has been talk of Braekhus moving up in weight to face Claressa Shields, who was sitting ringside after having defeated Femke Hermans earlier in the evening.

Shields does have a fight lined up with Christina Hammer for early in 2019.

“She has to take care of business with Christina Hammer,” said Braekhus of Shields.

Throughout the evening, boxing insiders told Boxingscene Saturday night that the network will utilize their budget on original programming and documentaries.

For many, Dec. 8, 2018 marked the end of an extraordinary and excellent run of boxing on the network. It will be difficult to put into words for now, but many will now focus their attention, and their wallets, on DAZN, ESPN, and Showtime.

HBO has been the benchmark for boxing for several years, but their lack of adapting to live streaming undercard bouts and further commitment to the sport from network executives marked a slow death of the sport on the network.

It would be wishful thinking for these network executives to change their minds, but that would not likely happen.

The only way boxing and HBO will belong together is if people look up fights that appeared on the network on YouTube or reminisce with fellow boxing fans.

It was a quite a run for boxing on HBO. But as has been the case for many years, the sport of boxing gets knocked down, but it gets back up.

HBO glad your out wow exciting card NOT