As to why, press in Norway reports that no suitable opponent (and there aren´t that many in female boxing) could be signed in time.

Next up for Braekhus could be a fight in New York later this year. 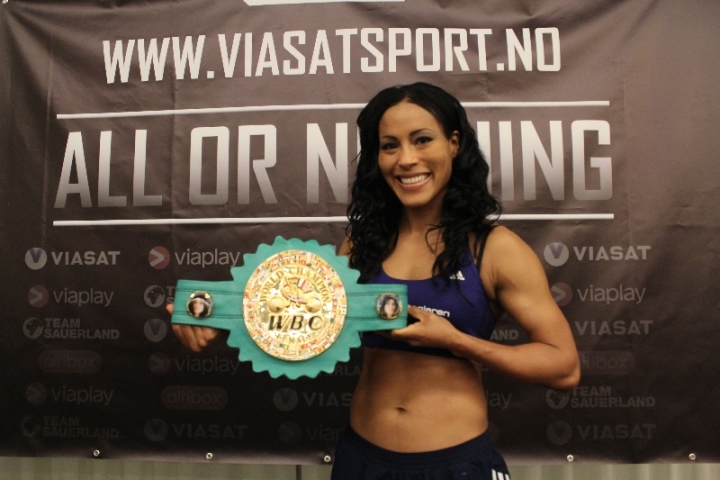 Teper, 3-0 since losing to Mariusz Wach last year) is still official challenger for the EU title (along with Robert Helenius) but will now go for a different title with a fight against Gerber, who is 5-0 since losing to Dereck Chisora in 2013 - a fight that ended his career with Team Sauerland.
...

In May, Sauerland Event won purse bids and planned to stage Yves Ngabu´s defence of the EBU cruiserweight title against mandatory challenger Noel Gevor and set it for June 29. It was then moved to September but now Gevor has pulled out and Ngabu is waiting for a new official challenger to be appointed.
...

Tickets for the upcoming show ‘The Time is Now’ at the Morningside Arena, Leicester on October 6th are available to purchase NOW from Eventbrite and Ticketmaster.

The show, which will be exclusively live on BT Sport, will be headlined by the eagerly anticipated encounter between super-lightweights Jack Catterall and Ohara Davies. Also on the show is huge heavyweight prospect, Daniel Dubois who will step up and take on the big-talking boxing veteran, former world title challenger Kevin ‘Kingpin’ Johnson. Double Olympic Gold medalist Nicola Adams also features.

The local interest fighting on the show will come from Leicester’s own Lyon Woodstock, when he defends his WBO European super-featherweight title against Essex man Archie Sharp and British super-featherweight champion Sam Bowen of Ibstock, Leicestershire, will make his televised debut and maiden outing under the Frank Warren banner.

Jack Catterall and Ohara Davies have been trading verbals to one another all year and both will now compete against each other to see who will progress closer towards a world title fight.

Imagine if the next breaking news was Canelo or GGG being canceled due to injury. That would send everything planned into a tailspin well almost cause Jaime Munguia would become the main event

Best news of the day!

Oh no! She's not fighting on the undercard of Canelo-Golovkin 2 damn it!!! Life will never be the same now for all of us!! Damn it!!