Is the best yet to come for Cecilia Braekhus or she is on the downside of a Hall-of-Fame career?

Even though she is 38 years of age, Braekhus believes in the former.

Braekhus will make another defense of her undisputed welterweight championship Saturday night as she faces Argentina’s Victoria Bustos at the Casino de Monte Carlo Salle Medecin in Monte Carlo, Monaco. The 10-round bout will precede the main event bout between Radhzab Butaev and Alexander Besputin for the vacant WBA welterweight title. 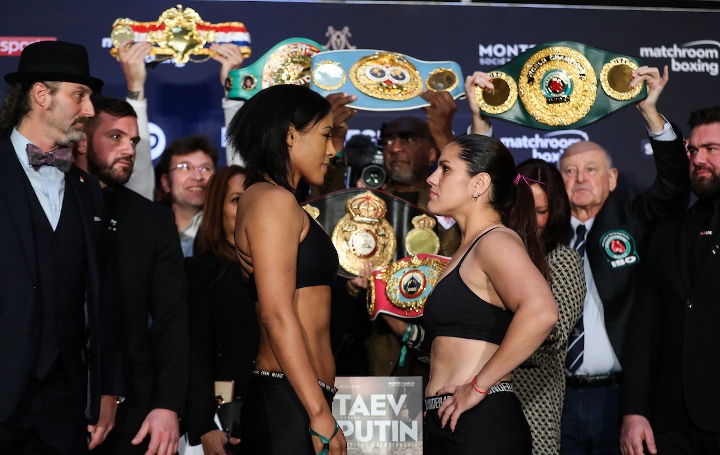 Bustos (19-5) has won four of her last five bouts, but Braekhus is expected to defeat the Argentine fighter. Bustos’ last defeat was by unanimous decision to Katie Taylor on Apr. 28 of last year and she lost to Erica Farias by decision, a fighter Braekhus easily defeated in June of 2017.

“I’m here to beat Bustos on Saturday and I want to make a statement,” said Braekhus at Thursday’s press conference.

What would be in store for Braekhus entering her 14th year as a prizefighter in 2020? She has been mentioned as a possible opponent for Claressa Shields, who is dropping down to 154 pounds after unifying all the middleweight titles. Shields will fight Ivana Habazin for two vacant world junior middleweight title belts on Jan. 10 in Atlantic City, New Jersey.

Despite being on the downside of his career, Braekhus believes she still has a lot left in the tank, especially with more opportunities for women to showcase their talent. Saturday night will mark Braekhus’ first bout with Matchroom Boxing, something for which she is grateful for.

“The door to the Olympics was closed for woman and you had to fight for a spot on a television show. What has happened in recent years is a pleasure to be a part of.”

Who knows how many more years, or fights for that matter, Braekhus will have left in her illustrious career. Having promoter Eddie Hearn and Tom Loeffler in her corner should pay dividends, especially if a move up to 154 pounds to face Shields would be her best move.

Loeffler is confident Braekhus can still fight at an elite level and maintain her status as the top female fighter in boxing today.

“This is a huge opportunity bout a tough fight. Under promoter Eddie Hearn’s guidance, if Cecilia is successful on Saturday, there will be some of the biggest fights in the history of women’s boxing next year.”

Braekhus should not move up or down. This will be 25 defenses of her unified WBA/WBC title if she wins today. One more ties Joe Louis for the most defenses of ANY world title in ANY weight class by ANY…