It’s the type of ratings that any boxing executive would kill for—and the type of exposure that helps at least partially justifies Deontay Wilder’s choosing autonomy over money.

The unbeaten heavyweight titlist was prominently featured in CBS’ “NCAA Final Four Basketball—Bridge” segment in between Saturday’s pair of tournament semifinals games. The show averaged 13.77 million viewers according to Nielsen Media Research, making it the second most-watched primetime telecast for the week of April 1-7, trailing only Texas Tech’s win over Michigan State.

Wilder (40-0-1, 39KOs) was on hand in Minneapolis to take in the Final Four action, in part to root for the Auburn Tigers—traditionally the archrival of his locally-based (Tuscaloosa, Ala.) University of Alabama. Still, he felt compelled to support his home state, complete with defending Auburn's falling prey to a late controversial call in contributing to their 63-62 semifinals loss to the Virginia Cavaliers, who went on to win the tournament championship Monday evening. 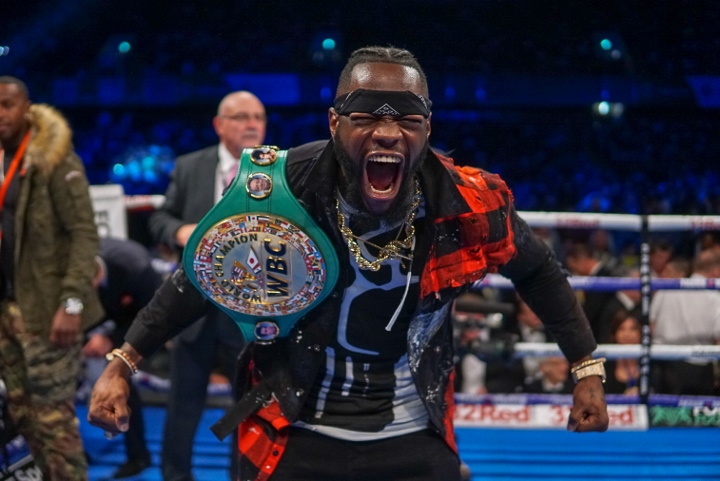 The platform also provided him the opportunity to discuss his May 18 title defense versus Dominic Breazeale. That bout will air live on Showtime, a wholly owned subsidiary of CBS Corporation, which also owns BoxingScene.com.

“Showtime—and in particular Stephen Espinoza (president of Showtime Sports)—facilitated Deontay’s appearance on the show,” Timothy Smith, vice president of communication for Premier Boxing Champions (PBC) told BoxingScene.com. “He worked with CBS Sports to make it happen. It’s part of an overall strategy to introduce the only American heavyweight champion to the American sports fan.

“We’ll continue to use popular sporting events as a platform to increase the overall visibility of all our boxers where it makes sense.”

The marketing strategy was instrumental in marketing several PBC athletes during the rebranding of its ongoing series on Fox Sports platforms. The relaunch was timed with the tail end of the 2018 National Football League (NFL) regular season and its early-round playoff coverage, leading to favorable ratings for its PBC on Fox primetime shows on December 22 and January 26 as well as the January 13 edition of PBC on FS1.

The platform also helped successfully drive sales for Fox Sports’ first-ever pay-per-view event in March, when Errol Spence dominated fellow unbeaten pound-for-pound entrant Mikey Garcia over 12 rounds in their welterweight title fight. Both boxers were regularly featured during NFL games on Fox, particularly games at Dallas Cowboys’ AT&T Stadium in Arlington, Tex. which housed the PPV event along with the 47,000 or so in attendance.

Such exposure factored into Wilder’s decision to stay put with PBC—and the relationships with Showtime and Fox Sports that go along with it—rather than give into the lure of lucrative offers from ESPN/Disney and standalone sports streaming service DAZN.

The latter platform offered a contract that suggested the ability to make in the vicinity of $100 million, although largely dependent on Wilder scoring a pair of fights with unbeaten, unified heavyweight titlist Anthony Joshua. He ultimately declined, instead opting to stick with a program and marketing strategy he wholly trusts—and one which has always loved him back.

From there came his debut in the PPV market, with last December’s thrilling 12-round draw versus Tyson Fury selling 325,000 units. A fight-week clip of Wilder’s exchange with BoxingScene.com videographer ‘Radio’ Rahim Davies immediately went viral, with his ‘Till This Day chant continuing to trend worldwide—even among those who’ve never before seen him in the ring.

“Wilder has a bigger than life personality and real star quality,” notes Smith. “With his natural charisma and charm and explosive knockout power, he is the heir to the lineage of great American heavyweight champions – Jack Johnson, Jack Dempsey, Joe Louis, Rocky Marciano, Muhammad Ali, Larry Holmes, Mike Tyson and Evander Holyfield. The more people who get to know him, that's more people who will come along for the ride.

“Some of those people that saw him on the NCAA Final Four broadcast will tune in to his May 18 fight against Dominic Breazeale on Showtime. If it’s an exciting fight and he scores an impressive knockout, they’ll be hooked and tell their friends. The hope is it will increase his popularity and ripple forward to future fights.”

With a pool of nearly 14 million viewers from which to choose, it’s the type of cross-promotion that few other platforms can provide.

[QUOTE=Boxing1013;19661386]I'm not a capitalist sycophant; I don't think it is a perfect system and I enjoy entertaining ways in which any system can be improved. But history has proven that capitalism is by far the best system we've seen yet,…

[QUOTE=MC Hammer;19661283]You have some selective attention, because what you put in bold is STRONGLY undercut by the rest of the quote. Sweden tried a piece of US capitalism and it harmed the people of the country. The Nordic model is…

[QUOTE=Boxing1013;19661085]You're arguing about inane things, seemingly incapable of admitting something as obvious as the sky being blue. Instead you double down and try to twist things around. I could say the sky is blue and you would say - well…

[QUOTE=MC Hammer;19659237]LMAO your brand of economics is rightwing. There is no denying that. If you believe that markets are balanced and fair, that decisions are made rationally in economics and that businesses compete on a level playing field you are…

[QUOTE=Boxing1013;19658588]First of all, economics is not a rightwing conspiracy theory. Lol. It is funny though because your talking points sound like you just watched Rachel Maddow for a year and all of a sudden you're a Karl Marx guy. And…