Carlos Adames Floors Frank Galarza, Stops Him In Fourth Round

Galarza entered the ring Saturday night intent on pulling off an upset of the undefeated Adames that he thought would lead to a 154-pound title shot. Adames needed less than four rounds to eliminate Galarza from title contention in a fight ESPN2 televised as part of the Terence Crawford-Amir Khan undercard from Madison Square Garden.

The Dominican Republic’s Adames (17-0, 14 KOs) knocked down Brooklyn’s Galarza with a left hook early in the fourth round and finished him soon thereafter. Referee Benjy Esteves stopped their scheduled 10-round junior middleweight match at 1:07 of the fourth round, with an unresponsive Galarza still standing, but absorbing one power punch after another.

“This was a message to all of the 154-pounders,” Adames said. “I want to face all the best. I’m coming hungry, and I’m determined to fight for a world title by the end of the year. I don’t care who has a title – I want it.” 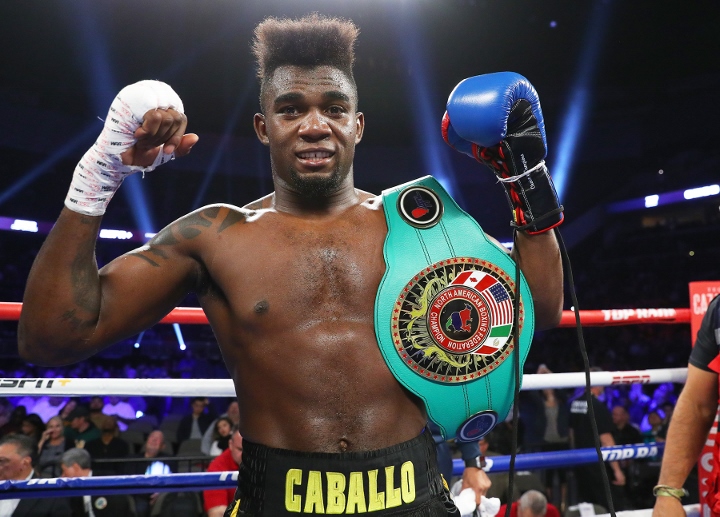 Galarza got up in plenty of time and tried his best to fight out of the trouble. Adames hurt him with another right hand to the side of Galarza’s head, which wobbled Galarza.

Sensing Galarza was ready to go, Adames unloaded a series of power punches that essentially left Galarza defenseless. Esteves stepped in because Galarza was vulnerable and wasn’t throwing punches back at Adames.

I called this one SMH galarza was talking about winning this fight will put him in line for a title shot, dude you just need to win PERIOD!!

Say hello to Don King Jr.......that hair. Don't remember him having that hair tonight though.