Carlos Adames did everything except knock out Patrick Day on Friday night.

The hard-hitting Adames mostly controlled their 10-round, 154-pound bout by consistently landing the harder punches and won a unanimous decision on the Richard Commey-Ray Beltran undercard at Pechanga Resort Casino in Temecula, California. Adames won by scores of 98-91, 97-93 and 97-93. 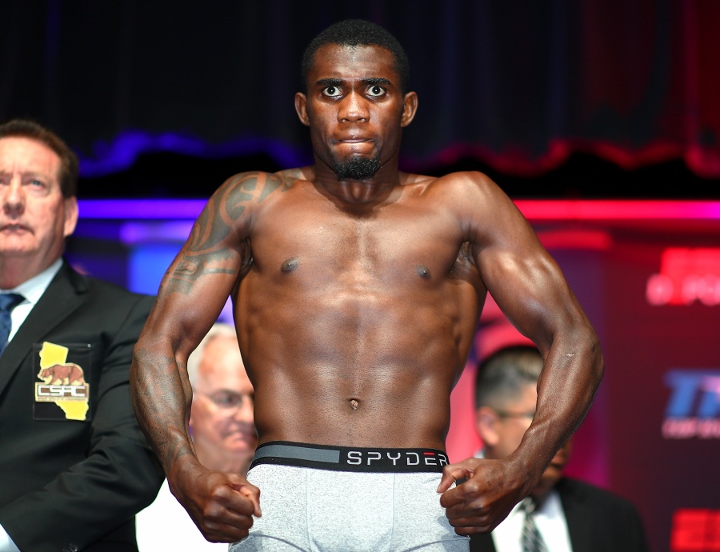 Adames almost knocked out Day late in the 10th round, but a courageous Day did everything in his power to withstand Adames’ onslaught and finished the fight on his feet. A devastating right hand by Adames started the trouble with about 50 seconds left in the fight.

Sensing Day was ready to go, Adames landed one power punch after another as Day stumbled around the ring. A right hand Adames landed just as the final bell sounded seemed to really hurt Day.

Day’s gloves touched the canvas about 30 seconds into the 10th round, but referee Ray Corona ruled Adames shoved him down.

Adames right hand knocked Day into the ropes with about 55 seconds to go in the ninth round. Adames hammered Day with several more power punches thereafter, but he couldn’t finish off a seemingly dazed Day.

A straight right hand by Adames snapped back Day’s head 55 seconds into the eighth round. Day’s overhand right connected with 25 seconds to go in the eighth, but Adames shook his head to indicate it didn’t affect him.

About 30 seconds into the seventh round, Corona warned Adames for a low blow. As soon as the action resumed, Adames started wearing down Day with right hands and left hooks to his head.

A hard left hand by Adames landed with about 30 seconds to go in the seventh round, but Day took that shot well.

Adames cracked Day with an overhand right that made him move backward just before the midway mark of the sixth round. Day continued attacking Adames body during the sixth round, but his shots weren’t hard enough to keep Adames from moving forward.

Adames added another hard right hand that affected Day later in the sixth.

Day landed a straight right to the body and came right back up top with a left hook when there was just over a minute left in the fifth round. Adames and Day connected with hard body shots during a good exchange just before the fifth round concluded.

Day opened up on Adames’ body at the start of the fourth round. An overhand right by Adames landed with 1:15 to go in the fourth.

Another overhand right by Adames connected to the side of Day’s head with about 20 seconds remaining in the fourth.

Adames drilled Day with a left hook to the body and then a left hook up top just after the midway mark of the third round. In the final 40 seconds of the third, Adames hit Day with a variety of power punches that slowed down Day.

A straight right hand by Adames split Day’s defense with 50 seconds to go in the second round.

Day, who was busier during the opening round, and Adames each landed hard body shots just before the first round ended.

[QUOTE=landotter;19866539]I thought this fight was fun. Adames was sound and throwing punches at a guy whose movement was pure self preservation. Day looked like he rehearsed back peddling all camp. Still, Adames scored well and did what good fighters are…

[QUOTE=richardt;19866362]Oh, look a fangirl sucking on the balls of a guy who will get owned by the top 154 pound fighters. Add your self to the list of idiots who are wined, dined and seduced by another dime a dozen…

I thought this fight was fun. Adames was sound and throwing punches at a guy whose movement was pure self preservation. Day looked like he rehearsed back peddling all camp. Still, Adames scored well and did what good fighters are…

[QUOTE=illpapi;19866353]You need to stop watching boxing...the punches that the boxers are throwing have been affecting you.[/QUOTE]Oh, look a fangirl sucking on the balls of a guy who will get owned by the top 154 pound fighters. Add your self to…

[QUOTE=richardt;19866274]Adames is slower than molasses in winter. No special effects but will be good canon fodder for the top guys to beat on him like a drum.[/QUOTE] You need to stop watching boxing...the punches that the boxers are throwing have…