Referee Charlie Fitch stopped the bout at 2:56 of the third round, after a disoriented N’Dam got up from that third knockdown.

“I felt good,” Smith said. “It felt good to be back in there. … I believe I’m the best in the world and I plan on proving that over the next couple of years. And I’ve got no injuries. A good, quick win, a fan-friendly win, and I hope the fans liked it. And I’ll be able to be back out soon and push on to bigger and better things.” 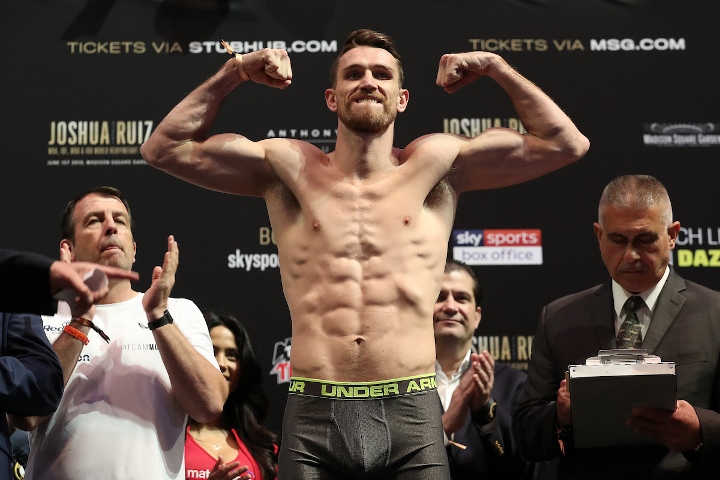 The heavily favored Smith made the first defense of the WBA “super” 168-pound title he won from George Groves in his previous fight. Liverpool’s Smith knocked out England’s Groves (28-4, 20 KOs) in the seventh round of the World Boxing Super Series super middleweight final September 28 in Jeddah, Saudi Arabia.

The 35-year-old N’Dam (37-4, 21 KOs) lost by technical knockout for the second time in his past three fights. N’Dam, a Monte Carlo resident raised in Cameroon, fought at the super middleweight limit of 168 pounds for the first time in five fights.

Smith’s overhand right nailed N’Dam and knocked him flat on his back with 15 seconds to go in the third round. N’Dam managed to get to his for the third time in as many rounds, but Fitch realized N’Dam shouldn’t continue and stopped their scheduled 12-round fight.

A left hook caught an exposed N’Dam and knocked him to the seat of his trunks with 24 seconds to go in the first round. N’Dam got up by the count of five, but clearly was disoriented.

N’Dam went down again – this time to his gloves and knees – just before the first round ended. Fitch rightly rule that Smith pushed him to the canvas, though.

Callum Smith looks good. But He beat glass chin N'dam who was dropped many times in the middleweight division. Groves was done when he faced Smith. Also he had an injury vs Eubank jr. Benavidez vs Callum Smith would be…

I don't know if Canelo will ever fight Callum. Smith is no Rocky Fielding, and a much better fighter than his brother Liam.

[QUOTE=Jab jab boom;19790993]it was team Canelo who mentioned Smith as an option. I mean, does he not call himself a champion at 168??[/QUOTE] Come on man he best Rocky Fielding possibly the worse champ at 168 with a Micky house…