He’s fallen between the cracks of a dispute between his trainer and manager Joe Gallagher and Matchroom promoter Eddie Hearn.

Johnson says he’s a promotional free agent although sees himself as a Matchroom fighter.

But there’s been a well-publicised row between Gallagher and Hearn over the trainer’s outspoken remarks over the treatment of Natasha Jonas, another of his fighters, and it now seems that the man who went to war with Artur Beterbiev in a thriller in late 2018 will struggle to get dates.

“I’m in La-La land, really,” said Johnson. “I heard yesterday he [Hearn] said he’s not working with Joe and he’s not going to get me a fight because he’s not obliged to get me one. But, for me, that kind of proves what I’ve always thought, that he’s never been really interested in me, if I’m honest. At the end of the day, what Joe said in regard to Tasha, which he’s obviously apologised for, it’s nothing to do with me. That’s not my fault. As far as the money situation goes, with him saying Joe’s hard work to deal with when Eddie sends offers to Joe, Joe sends them to me and the last one I just didn’t think it was a fair offer. It was stupid.”

Before coronavirus wreaked havoc with the boxing schedule, Johnson had been due to meet Igor Mikhalkin for the European title.

“First off it I was down to fight for the European title and we’d agreed a purse for that,” he explained. “It was okay, it wasn’t great [money] but obviously if I win it leads to other things. Then it never happened because of lockdown. I was supposed to have fought in March and then it was all change and then it was May and lockdown came in at the end of March. Then he offered me a 40 per cent reduction to fight behind closed doors and the first offer wasn’t great so I thought, ‘No, I’ll wait until the crowds are back’ thinking they’d be back soon. Then, the last offer was a four-fight offer and the third fight was to fight [Joshua] Buatsi but the offer, I just don’t think it’s fair and people I’ve spoken to don’t think it’s fair. I don’t think it’s just me being greedy.” 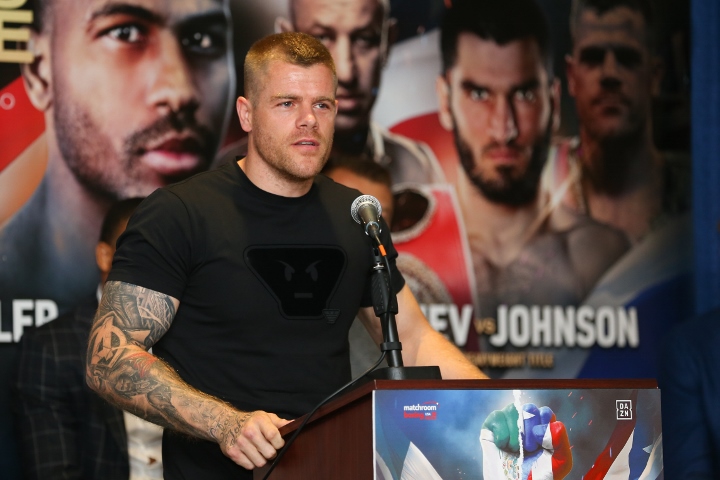 It’s been a frustrating period for so many in the sport but Johnson has had a stop-start career since turning over.

“At the end of the day, when I look back through all my career, I’ve had 19 fights in 10 years and that’s not all my fault and one of the years I had five or six fights when I was fighting on Carl Greaves shows and I question why. All the big fights I’ve had have only really been because I’ve been mandatory. I think the only fight I really got looked after with Matchroom was the last fight, with [Sean] Monaghan and I think they look after Buatsi more than they look after me.”

Johnson was hoping to get out in December but now he’s not sure he will get the chance.

“I don’t know what to think,” he continued. “It’s hard. Since March I’ve really tried to stay positive and I’ve kept training and I’ve really tried to make sure I’m ready for when it comes. “It’s really frustrating. I’m 35 and I haven’t got forever. It scares me as well because I’ve dedicated my life to this sport since I was young and I’ve given it everything and I feel I’ve not had the rewards I deserve for the effort I’ve put it. Not only that with the talent I’ve got, everyone who watches me fight I seem to impress or entertain, even if I’ve lost. So I think what is it? Why has it gone this way for me? Maybe it’s because I’m from a small town [Boston] and I don’t get looked after like the city boys do or maybe I’m not as good as I think I am. Maybe people don’t like me, I don’t know.”

Johnson would love to be in the world title mix, back in with Beterbiev, Bivol, Joe Smith or the other top 175-pounders. He was even mentioned as a possible Canelo opponent earlier in the year, but he’s also willing to fight domestic rivals Anthony Yarde and Buatsi.

“I’m not bothered,” he said. “I’d fight Buatsi next week if I was treated fairly with the purse. You hear Eddie saying he doesn’t like putting his fighters together but we all know Buatsi’s his fighter. I’m not. It’s been plain to see for a long time. I’m happy to fight Buatsi whenever they want it but just treat me fairly.

“I’d fight anybody, give me three or four weeks to get sparring but I’d fight anybody. When I fought Beterbiev I’d only had 90 seconds in 18 months and I jumped straight in. It didn’t pay off but I didn’t do that for the money because that money was long gone in six months, I did it because I’ll fight anybody and at the time I thought, ‘I’m a nobody, I’m getting a shot and I’ll take it because I’m not in a position to say I deserve more’. That’s why I went there. With the Buatsi fight I feel like I’m an opponent they’re bringing over just to give a few quid to. “Some people say it’s Joe but it’s not really, Joe just supports his fighters.

“Me and Buatsi have been up there as the talk of British boxing but it’s all talk and I don’t believe they want it, maybe they want it when I’m 37 and I have fought once in three years,  that’s what it seems to me from the outside where I am and where I’m looking.”

The situation is testing Johnson’s resolve but that’s something he’s prepared for, even though he admits he’s starting to question both himself and his future, even though he’s still the mandatory challenger for the European title.

“I haven’t come this far to only come this far,” he went on. “I’ve heard people say I’m not strong enough mentally and I think to myself I don’t know where people get that. I’ve been in the sport 10 years, I’ve had 19 fights which is diabolical. Some of it’s been my fault, 70 per cent of it hasn’t. I went through a rough patch when I lost my dad but if I wasn’t mentally strong I wouldn’t still be here, trying to get a fight, keeping myself ready, isolating myself in my garage for six months training like a demon so when I do get back I am ready. Mentally weak people can’t do things like that. I think I can still do it. I am getting to the point where I’m thinking it’s not going to happen even though I thought it would. Even the times when I lost my dad and everything else and I was going through a real bad time in my life and I couldn’t even leave my bedroom, deep down I always thought in the back of my head I’d still do it one day. I’m starting to doubt I will now, not because of my talent but because of the bad side of boxing and the politics.”