Browne Getting Help From Chisora To Prepare For Whyte Clash

Chisora, who lost a hotly disputed decision to Whyte in December 2016, provided Browne will some advice on how to get the better of Whyte in their upcoming WBC Silver title fight which will be held at London’s O2 Arena. 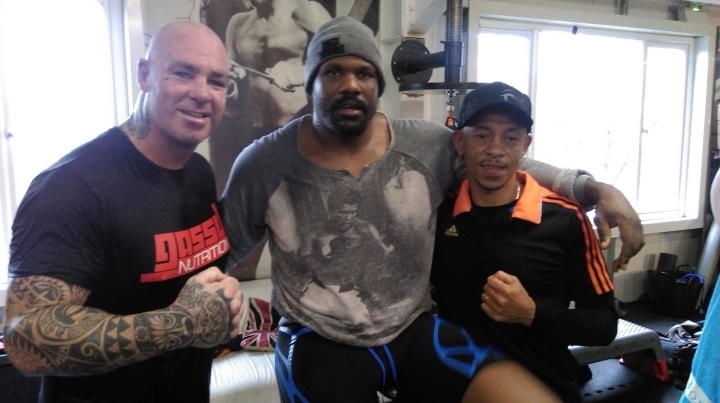 Browne stated: “Dereck is an absolute gentleman and today’s session was a good hard slog. It was exactly what I needed. We had a good chat about Whyte and what he brings.”

Browne’s trainer, Rodney Williams, continued: “The sparring was excellent and just what was required at this stage of Lucas’s preparation. Chisora is a humble man and we found both him and his trainer, Don Charles, very welcoming and accommodating. We have another session lined up on Wednesday.”

Chisora extended the welcoming by inviting Browne to his farm for sprint work around his race track. “We will put in a big session tomorrow, followed by more sparring Wednesday, and from there on I’ll be sharpening up and getting ready to put Whyte to sleep,” Browne concluded.

IN OTHER NEWS: Chazz Witherspoon raised his winning streak to eight in a row as he went the eight-round distance by won a unanimous decision over Lamont Capers that headlined a seven-bout card at The Claridge Hotel in Atlantic City.

The show, which took place this past Saturday,  was promoted by Mis Downing Promotions and Silverspoon Promotions.

Witherspoon was able to outpoint the crafty Capers.  Capers was very competitive, but it was Witherspoon's size and harder punches that proved to be the difference as he captured the via 78-74, 78-74 and 77-75 scores.

[QUOTE=pollywog;18568370]Big daddy gonna flatten the villain... BOOK IT!!![/QUOTE] Impressive, you suck both Parker and Browne [email protected] at the same time, you are some specimen. You know how to suck good sir :)

As this fight leans closer im leaning to Browne

I can see a scenario where Whyte KO's Browne and Chisora comes flying into the ring, WWE style and glasses Whyte