Brandon Rios gets to check off two items from his bucket list by the time he steps into the ring this weekend.

The former lightweight titlist and current welterweight hopeful will collide with Humberto Soto this Saturday at Auditorio Municipal in Soto’s hometown of Tijuana, Mexico. The event will mark the first show to air live from Mexico on DAZN, with whom Rios is aligned through a promotional deal inked with Eddie Hearn’s Matchroom Boxing USA last year.

Along with helping the sports streaming service launch its brand south of the border, Rios gets to settle up a lot of unfinished business with the fight.

“It’s pretty cool that this fight is finally happening,” Rios told BoxingScene.com. “I remember a long time ago, when we were both at lightweight we were supposed to fight but it never happened. So it’s pretty cool that we get to settle this once and for all.” 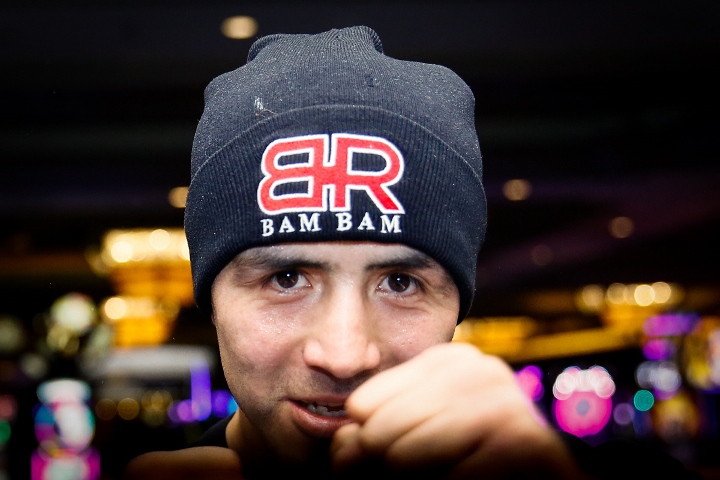 Once upon a time, Rios and Soto both saw separate lightweight title reigns briefly overlap. Soto (68-9-2, 37KOs) vacated a 130-pound title to move up to 135, where he claimed a vacant belt in a March ’10 win over former champ David Diaz. His reign lasted less than 18 months, vacating in the latter half of 2011 to campaign in the super lightweight division.

Rios (35-4-1, 26KOs) won his first title fight in Feb. ’11, knocking out Miguel Acosta less than six months after scoring a minor upset in a disqualification win over then-unbeaten Anthony Peterson in their title eliminator. Like Soto, Rios’ title reign didn’t see its way out of 2011, vacating the belt at the scales after missing weight ahead of a Dec. ’11 stoppage win over England’s John Murray.

A follow-up effort to regain his old belt also saw the Mexican-American boxer miss weight, settling for a 12-round non-title points win over Richar Abril in his last-ever fight at lightweight.

While both Rios and Soto campaigned at 140 at the same time, there never came the right opportunity to revisit old business. With both boxers reclaiming a new interest in the sport in 2018, their respective comebacks have now led to a pivotal crossroads fight.

For Rios, it’s a chance to honor his parents’ heritage and fight in Mexico for just the second time in his career. The lone other occasion came in 2009 when he was still a rising lightweight contender.

“It’s really amazing for me,” says California’s Rios, who in his previous fight had the chance to perform in his birth state of Kansas last November. “Last time I got to Kansas where I’m originally from, and now it’s Mexico where my father was born. I haven’t fought there in almost 10 years, and it’s the first time that DAZN does a show from down there.

“I know it’s Soto’s hometown, but my father was born in Mexico (Chihuahua) and I’ve always had a lot of fans in Mexico and throughout the Mexican-American communities across the country. Tijuana is just a couple of hours away from Los Angeles, so I know my fans will support me.”

Naturally, both boxers still carry aspirations of winning another major title in the pro ranks.

Soto, 38, comes in having won his last three starts against nondescript competition following a surprisingly competitive 10-round points loss to then-unbeaten Antonio Orozco back in Oct. ’15. The HBO-televised bout followed his last notable victory, outpointing John Molina Jr. in a Sept. ’14 Showtime Pay-Per-View 10-round preliminary clash in Las Vegas.

Rios comes in the much younger of the two at age 32, but whose post-title run has produced mixed results.

A thrilling 7th round knockout of Mike Alvarado in their Fight-of-the-Year level Oct. ’12 war boasted potential of a title run at super lightweight. His shot at an interim title, however, fell short in a narrow points loss to Alvarado in their rematch five months later.

Losses to Manny Pacquiao, Tim Bradley and most recently Danny Garcia one year ago are hardly anything over which to hang your head, but eclipse any win he’s managed to post over that stretch. Still, a sigh of relief came with his last ring appearance, surviving early rough patches to knockout Ramon Alvarez—Saul ‘Canelo’ Alvarez’s older brother—in round rounds last November in Mulvane, Kansas, four hours east of his Garden City birthtown.

Now comes the opportunity to headline in Mexico, and in a fight where a win could lead to something bigger in the not-to-distant future.

“When they mentioned Soto’s name, I was like ‘F*** yeah’ and took it with a quickness,” Rios admits. “It’s one step closer to getting back to the top. At the end of the day, Humberto Soto is still a three-time world champion, very strong and smart and wants the same thing I want—a win to bring him closer to another world title.

“I’ve always wanted this fight and disappointed when it didn’t happen when it was supposed to. Now that it’s back around and we’re fighting in Mexico, it’s a real honor for me.”

Man this is sad, Rios' best days are behind him and Humberto has been done as well. I hope he is getting paid well but is that money worth his health?

Wow dazn are really tearing things up now lol, i dont care if its cheap they should be paying people to watch this crap.

They dug up to fossils and are sending them to a ring in Mexico. Mexico deserves a better fight than this for DANZ debut.

Isn't Rios trained by Robert Garcia? If he is, he could turn him into a champion again right?