Cecilia Braekhus beat up Victoria Bustos for much of their 10-round fight Saturday night. 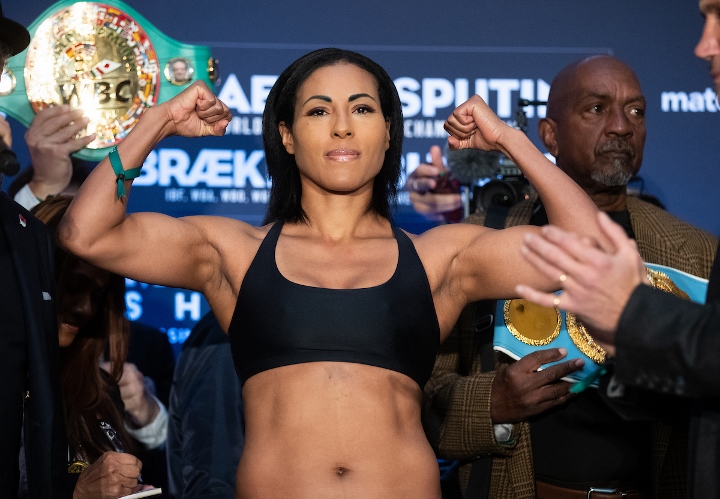 Her wide win enabled Braekhus to retain her IBF, IBO, WBA, WBC and WBO titles. The 38-year-old Braekhus made the 25th defenses of the WBA and WBC championships she won in March 2009.

The 30-year-old Bustos mostly has fought as a lightweight since she turned pro in July 2011. Bustos (19-6) hasn’t scored a single knockout in 25 professional fights, either, thus she wasn’t much of a threat to hurt the better, bigger Braekhus.

Bustos hadn’t fought in almost exactly a year before boxing Braekhus. In her prior bout, Bustos beat Enis Pacheco in a 10-round junior welterweight fight last December 1 in Perez, Argentina.

As dominant as she was, Braekhus didn’t seem to hurt Bustos badly at any point in their fight. She blasted Bustos with a straight right hand in the 10th round, but Bustos took it well and kept pressing forward.

Braekhus landed various punches, both from close and far distances, in the eighth round. Bustos pressed forward and missed wildly with her power shots in that two-minute period.

Braekhus appeared to score a knockdown during the sixth round, but referee Diana Miliani ruled it a slip. A counter left hook by Braekhus landed clean, though, and sent Bustos to the canvas.

Just as she had done in previous rounds, Braekhus connected with a right hand to the side of a hunched-over Bustos’ head in the fifth round.

An overhand right by Braekhus caught Bustos on the side of her head in the fourth round. Braekhus completely controlled the third round by keeping an aggressive Bustos at a safe distance and occasionally landed power punches.

Braekhus caught Bustos with a left-right combination with just over 30 seconds to go in the second round.

It was obvious in the opening round that Braekhus would have a relatively easy time with Bustos. She landed two hard right hands in the first round and avoided most of the punches Bustos threw.

[QUOTE=Koba-Grozny;20221617]That could work I guess, at least Delfine's the youngest of the 3 potential opponents, but I still say she should have got an immediate rematch. Funny thing is Persoons getting lighter whilst Katie's getting heavier... and it's hard to…

[QUOTE=ShaneMosleySr;20221597]Jesus of course someone on this forum is comparing her to Joe Louis. This forum is full of people who are insane.[/QUOTE] Well maybe, never seen her box but don't forget Joe Louis invented the bum of the month club.

[QUOTE=ShaneMosleySr;20221921]It’s a different sport. My middle school basketball team won six titles in eight years, the first basketball team to do that since Michael Jordan’s Chicago Bulls. That’s an insane statement, just like the one made comparing Braekhus’ achievements to…

Said lt afew days ago , ill say itt again , apart from 1, or 2 fighters in women's boxing the rest are poor.

[QUOTE=ShaneMosleySr;20221921]It’s a different sport. My middle school basketball team won six titles in eight years, the first basketball team to do that since Michael Jordan’s Chicago Bulls. That’s an insane statement, just like the one made comparing Braekhus’ achievements to…