BoxingScene.com's Knockout of The Year: Whyte Over Chisora

Dillian Whyte was headed toward another close call against Dereck Chisora.

Two years after defeating Chisora by split decision in a slugfest that warranted “Fight of the Year” consideration, Whyte wasn’t about to let their rematch get to the scorecards, too. There was too much at stake – most of all a probable second shot at Anthony Joshua, the United Kingdom’s cash cow.

As Chisora came forward just after the midway mark of the 11th round, Whyte saw his opportunity. Chisora had his head down, which allowed Whyte to uncork one of his lethal left hooks.

Whyte’s swift, sweeping shot landed flush on Chisora’s chin. The veteran heavyweight was out before falling flat on his back.

Referee Marcus McDonnell began counting, but Chisora’s corner men entered the ring to make Whyte’s rival was OK. Their very competitive fight, scheduled for 12 rounds, ended at 1:56 of the 11th round December 22 at O2 Arena in London.

“That left hook is my money shot,” Whyte said. “That shot is going to put a lot of people away. They can train for it as much as they want. I’ve been in deep waters and I can swim. I was in great shape. I wasn’t tired once. I was just pacing myself and I knew the knockout was gonna come. Whoever wants it can get it. I want Joshua next! Let’s do this. Rematch!”

The Jamaican-born, London-based Whyte was down by the same score, 95-94, on two scorecards when he ended it. Whyte was ahead of Zimbabwe’s Chisora, 95-94, on the third scorecard.

The 30-year-old contender’s emphatic victory could lead Whyte to that coveted rematch against Joshua on April 13 at Wembley Stadium in London. Joshua, the IBF/IBO/WBA/WBO champion, knocked out Whyte in the seventh round of their first fight three years ago at O2 Arena. 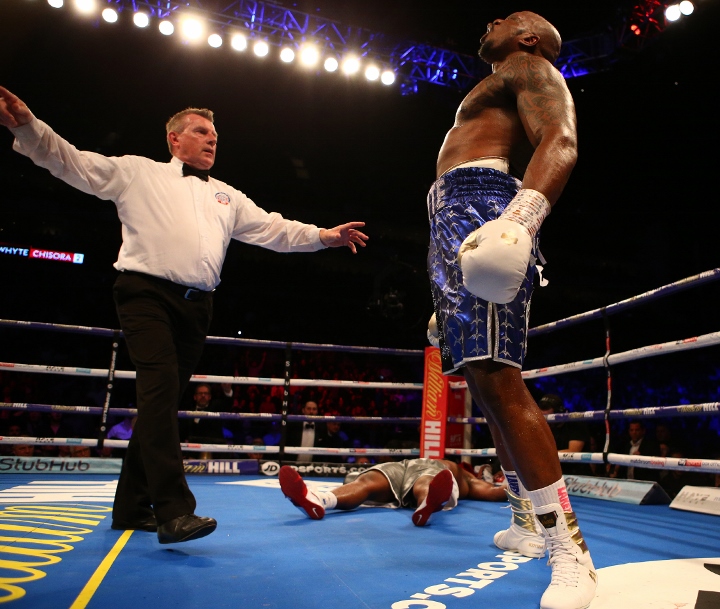 RUNNERS-UP FOR KNOCKOUT OF THE YEAR (listed chronologically):

Dillian Whyte-Lucas Browne: Whyte had battered and bloodied Browne for five-plus rounds before drilling him with a chopping left hand that hit the tough, previously unbeaten Australian heavyweight directly on his jaw. That shot sent an unconscious Browne down, face-first. With Brown sprawled out on the canvas, referee Ian John Lewis immediately waved an end to the action in the sixth round March 24 at O2 Arena in London.

Vasiliy Lomachenko-Jorge Linares: The precision and speed with which Lomachenko snuck a left around Linares’ right elbow made this one of the most unique knockouts of 2018. Lomachenko, who got up from the first knockdown of his career late in the sixth round, temporarily paralyzed Linares by landing that left to the body amid a flashy, 15-punch combination that helped set up that decisive body blow early in the 10th round May 12 at Madison Square Garden in New York. Ukraine’s Lomachenko also became a champion in a third division by winning the WBA world lightweight title from Venezuela’s Linares.

Roman Gonzalez-Moises Fuentes: Gonzalez’s right cross hit Fuentes with such full force, it turned out Fuentes’ lights in the fifth round of their scheduled 10-rounder on the Canelo Alvarez-Gennady Golovkin undercard September 15 at T-Mobile Arena in Las Vegas. “Chocolatito” blasted Fuentes so hard, the former four-division champion came over, got down on one knee and tried to help referee Robert Byrd tend to Fuentes. This impressive victory came in Gonzalez’s first fight in the 53 weeks since Srisaket Sor Rungvisai brutally knocked out the Nicaraguan icon in the fourth round of their immediate rematch in Carson, California.

Naoya Inoue-Juan Carlos Payano: The legend of “The Monster” grew when he obliterated Payano with a straight right hand that ended their WBA bantamweight title fight barely a minute into it October 7 in Yokohama, Japan. Inoue set up that punishing punch with a quick jab. Payano, who had never been knocked out, didn’t know what hit him and fell like a chopped tree, flat on his back. Payano attempted to get up, but he could only reach one knee before he fell over again. Inoue’s second straight first-round knockout enabled him to advance to the semifinals of the World Boxing Super Series’ bantamweight tournament.

Teofimo Lopez-Mason Menard: The precocious Lopez wasted no time whatsoever in testing Menard’s chin during their December 8 bout in The Theater at Madison Square Garden. The unbeaten lightweight landed a picture-perfect overhand right that knocked out Menard as soon as it landed. Just 38 seconds into their scheduled 10-rounder, an unconscious Menard fell flat on his face. Referee Charlie Fitch began counting, but quickly realized Menard couldn’t continue. Lopez celebrated by striking the Heisman Trophy pose and putting on a Kyler Murray jersey less than an hour after the Oklahoma quarterback won that prestigious award nearby in Manhattan.

Quote: Originally Posted by PunchyPotorff View Post IMO the Inoue KO was the biggest statement. At this point, it looks like he has everything going for him. Definitely a 'Monster'. Whyte's KO was good, but it took 11 rounds of…

Quote: Originally Posted by PunchyPotorff IMO the Inoue KO was the biggest statement. At this point, it looks like he has everything going for him. Definitely a 'Monster'. Whyte's KO was good, but it took 11 rounds of some just…

I mean it was okay, but this is the same Chisora who already got smashed by David Haye and pummeled by Tyson Fury. We should award a fighter who topples those who've never been down before.

That was a massive punch by Dillian Whyte but I personally think Miguel Marriaga's knockout against Jose Estrella via body punch was KO of the year, end of story.