Some choices are easy.

Oleksandr Usyk as Fighter of the Year, at this website and through just about every outlet that covered boxing in 2018, was as easy as it gets. Three major wins, unification of one of boxing’s deepest current divisions, all while being in the opponent’s home country every time out?

Some years, the choice for fight of the year is like that. In May 2005, when Tony Weeks stepped in to save Jose Luis Castillo against Diego Corrales, voting for the year was over. Sure, there was lip service to it being a ‘front runner’ but everyone probably knew, not too deep down, they weren’t going to see a better fight that year.

It’s fair to argue we haven’t seen a better one since. 2018 wasn’t like that. Float around the various sites and publications and there is plenty to pick from. Yahoo liked Murat Gassiev-Yunier Dorticos, this site liked Tanaka-Kimura, ESPN chose Jarrett Hurd-Erislandy Lara, and Ring went with Alvarez-Golovkin II.

2018 was that kind of year: deep in quality and abundance. Fight and Fighter are the big awards. If they were Oscars, it would be Best Picture and the Best Actor/Actress category combined. There is always more to any given year than its best fighter or best drama between the strands. With the big one’s are in, we close our version of awards season reviewing some of the best of the rest of what will likely be looked at as a transformational year for the sport.

Nothing marked the transformation like the first of these categories.

Event of the Year: The Demise of HBO Boxing

No single network or brand has been as synonymous with boxing in the last 30-40 years as Home Box Office. From Sugar Ray Leonard to Mike Tyson to Oscar De La Hoya to the prime years of Floyd Mayweather and Manny Pacquiao, it was the flagship of the sport in the United States even well after it wasn’t. In 2018, HBO cancelled boxing. The sweet science will continue on and it may ultimately be bigger now. Deals with ESPN and Fox, along with Showtime and its occasional forays onto CBS, are already proving to be good things. Their biggest audiences have meant more eyeballs than HBO has delivered in a long time. HBO struggled to get two million viewers for any single fight this decade. Network PBC shows have done nearly and more than double that a few times in the last three or four years. Still, even as budgets and dates declined, HBO delivered memorable fare like the Andre Ward-Sergey Kovalev rivalry, the SuperFly series, and 2018’s biggest money show, Alvarez-Golovkin II. It didn’t matter. The return on investment is greater airing Game of Thrones or Westworld and the competition is throwing money around HBO doesn’t want to anymore. In 2019, fans will have access to more fights on more platforms than ever before. It’s a new world for the sweet science and HBO is now a part of the past. Fans will be forgiven if it takes awhile to stop humming the HBO intro theme on big fight nights though. 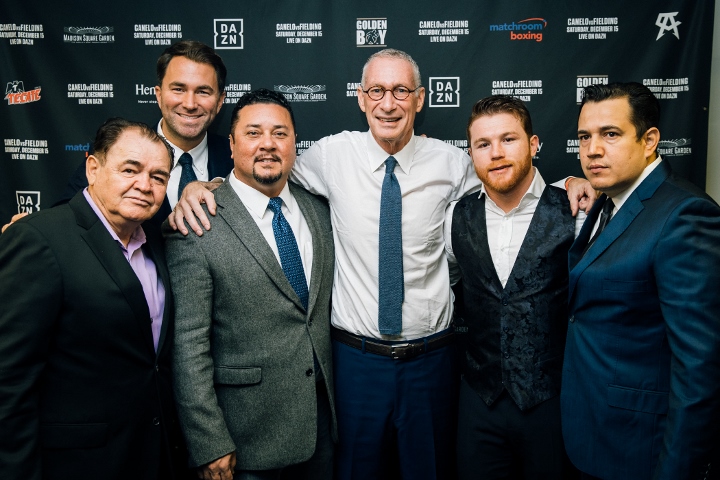 Network of the Year: DAZN

The streaming outlet wasn’t a physical part of the boxing landscape until the second half of the year but, once it arrived, the shockwaves were clear. The long term signing of Saul Alvarez made the most headlines. For serious fight fans, was there any question what platform delivered the most quality down the stretch of the year? The finals of the World Boxing Super Series at super middleweight, all of the quarterfinals at bantamweight, Jr. welterweight, and cruiserweight, Anthony Joshua-Alexander Povetkin, Oleksandr Usyk-Tony Bellew, and their in-ring debut of Alvarez made the $9.99 price tag a bargain. Whether DAZN survives or not, becomes a staple or not, it thrust itself into the boxing conversation from out of nowhere and upped the ante in an increasingly digital universe of programming.

The Undertaker theme memes still work every time one watches it again. Go ahead and argue a better round. For pure action, there will surely be some debate. The debate will be wrong; it will miss the point. A year from now or a decade from now, what single three minutes from 2018 will still be talked about? Which will most people remember the best? What frame will still have folks asking “how the hell did he get up?” When Tyson Fury, ahead in the fight, went down on a mammoth right hand and left hook from Deontay Wilder, when his head struck the back of the canvas, it was over. Every viewing instinct, and the experience of seeing similar trips to the deck, said so. Referee Jack Reiss was giving a count but that was just a formality…until it wasn’t. Fury just beat the count (and yes, he beat the count) and then he did more than that. Fury survived Wilder’s move to finish and then rocked the Bronze Bomber to stem the tide and maybe even win the second half of the round. It was the most dramatic finish to a major fight since Sergio Martinez beat the clock against Julio Cesar Chavez Jr. in their final round and elevated a pretty solid heavyweight fight into classic territory. That’s your round of the year.

Promoter of the Year: Matchroom Sport

Top Rank and the PBC seem to go back and forth for US supremacy most years with Eddie Hearns and Matchroom Sport making their case across the pond. It’s hard to argue with the overall success at Matchroom this year. Hearns again highlighted Anthony Joshua to massive arena crowds and big pay-per-view sales in a unification match with Joseph Parker and the Povetkin defense. That was just a piece of their entertaining heavyweight puzzle as they also provided Dillian Whyte’s rousing wins over Parker and Derek Chisora and Chisora-Carlos Takam. They also promoted or co-promoted big chunks of the World Boxing Super Series, including super middleweight winner Callum Smith, sealed a pact with Usyk, and further developed Katie Taylor towards stardom. They worked to promote in the United States to mixed effect and still have room to grow there but managed to have their fighters on prominent display not only on DAZN but also ESPN, Showtime, and HBO. They are the best in the business right now at the art of getting butts in seats and navigating the multiple viewing platforms available.

For full coverage of the rest of the picks at BoxingScene this year, click below:

Fighter of the Year: Oleksandr Usyk

Prospect of the Year: Devin Haney