The unbeaten Ukrainian southpaw went 3-0 last year and firmly established himself as one of the best boxers, pound-for-pound, in the sport. Usyk, BoxingScene.com’s 2018 “Fighter of the Year,” also became the undisputed cruiserweight champion of the world and set up what figures to be a lucrative jump to the heavyweight division this year.

Each of Usyk’s three victories last year were contested in the home country of his opponent as well.

The 31-year-old Usyk’s victory over Gassiev gave him the IBF belt, too, to go along with the WBA, WBC and WBO championships.

Usyk didn’t add any more titles when he knocked out Bellew (30-3-1, 20 KOs) on November 10 at Manchester Arena in Manchester, England. He did add a fan in the awed Bellew.

“I fought the very, very best,” Bellew said. “He’s just better than me. Just accept it, man. You come up against great people in life, and sometimes you lose – you’ve just gotta accept it. Oleksandr Usyk is pound-for-pound material. Man, I’ve got nothing but great things to say about him. He’s the best I’ve ever fought. He’s slick, he’s strong and he’s exceptional. And I give him his credit.”

Usyk is committed to moving up to heavyweight for his next fight. If his first heavyweight bout of 2019 is successful, Usyk is expected to pursue a shot at British superstar Anthony Joshua (22-0, 21 KOs), the IBF/IBO/WBA/WBO heavyweight champ. 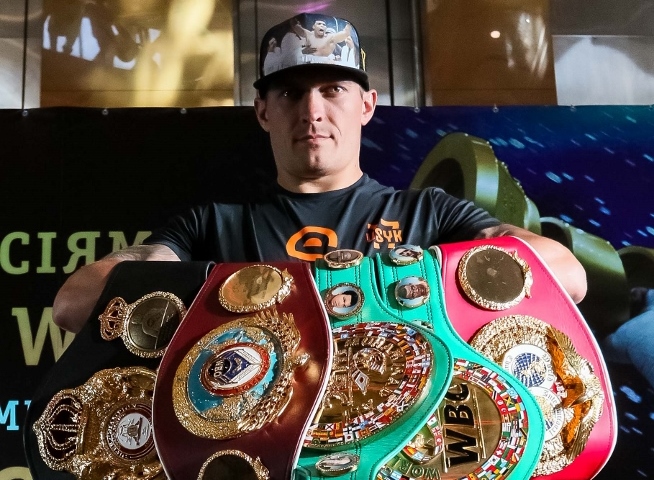 RUNNERS-UP FOR FIGHTER OF THE YEAR (listed alphabetically):

Terence Crawford: The undefeated Crawford became a world champion in a third division in 2018 by out-classing Australia’s Jeff Horn to win the WBO welterweight title. In his debut at 147 pounds, the Omaha, Nebraska, native stopped Horn (19-1-1, 13 KOs) in the ninth round of their June 9 bout at MGM Grand Garden Arena in Las Vegas. The former undisputed 140-pound champion made the first defense of his title in comparably dominant fashion October 13. The 31-year-old Crawford (34-0, 25 KOs) out-boxed Jose Benavidez Jr. (27-1, 18 KOs) that night and stopped him in the 12th round at CHI Health Center in Omaha.

Mikey Garcia: The ambitious Garcia began the year by moving up from the lightweight limit of 135 pounds to 140 pounds and knocked off IBF junior welterweight champ Sergey Lipinets (14-1, 10 KOs). The Oxnard, California, native dropped Lipinets in the seventh round and convincingly beat him by unanimous decision in their 12-rounder March 10 at Freeman Coliseum in San Antonio. The 31-year-old Garcia (39-0, 30 KOs), who’ll challenge IBF welterweight champ Errol Spence Jr. (23-0, 20 KOs) on March 16, returned to lightweight for his following fight. He also was excellent in that 12-rounder, in which he out-boxed previously unbeaten Robert Easter Jr. (21-1, 14 KOs) to add the IBF 135-pound crown to his WBC championship July 28 at Staples Center in Los Angeles.

Maurice Hooker: Dallas’ Hooker had the best year of his career in 2018. He traveled to Terry Flanagan’s hometown of Manchester, England, and out-pointed the then-undefeated Flanagan (33-2, 13 KOs) by split decision June 9 to win the vacant WBO junior welterweight title. He headed to another opponent’s hometown for his first title defense November 16. The 29-year-old Hooker (25-0-3, 17 KOs) got off the canvas in the second round of that bout. He regained control of their fight from there, dropped Alex Saucedo (28-1, 18 KOs) in the seventh round and stopped him several seconds later at Chesapeake Energy Arena.

Kosei Tanaka: This 23-year-old boxer already is a three-division champion, just 12 fights into his pro career. He fended off fellow Japanese fighter Sho Kimura in BoxingScene.com’s “Fight of the Year” for 2018, which Tanaka won by majority decision September 24 in Nagoya, Japan. The former minimumweight and light flyweight champ won the WBO flyweight title from Kimura (17-2-2, 10 KOs). In his first fight of 2018, Tanaka (12-0, 7 KOs) stopped the Philippines’ Ronnie Baldonado (13-1-1, 9 KOs) in the ninth round March 31 in Nagoya.

Josh Warrington: Even in his hometown, Warrington wasn’t supposed to take the IBF featherweight title from Lee Selby. The gritty Warrington out-worked Wales’ Selby, though, and pulled off an upset. He beat Selby by split decision in their 12-rounder May 19 at Ellen Road Football Ground in Leeds, England. Warrington’s second victory of 2018 was even more impressive. An underdog again against Northern Ireland’s Carl Frampton (26-2, 15 KOs), the 28-year-old Warrington (28-0, 6 KOs) hurt Frampton in the first and second rounds, and clearly defeated the former super bantamweight and featherweight champion December 22 in Manchester, England. Frampton’s only loss before Warrington beat him by unanimous decision came against Leo Santa Cruz (35-1-1, 19 KOs), who’s generally regarded as one of the best boxers in the sport.