There really should have been a better storyline behind Jeison Rosario’s fifth-round stoppage of Julian Williams, a bout that earned Boxing Scene’s Upset of the Year award for 2020.

Unlike other great upsets in the sport, Rosario’s win wasn’t a case of an undeserving fighter coming out of nowhere to defeat a dominant champion who decided to take the night off and paid for such hubris.

There wasn’t any pre-fight drama or tragedy that spurred Rosario on, because even while the Dominican Republic native came up the hard way in boxing and in life, so did Williams, making the underdog in life scenario a draw.

So maybe we’ll just stick to the idea that when a 30 to 1 underdog cashes in, that’s a big deal in this, or any other, sport.

That’s the story, but it really doesn’t make sense. Sure, Williams was fresh off a stirring May 2019 win over Jarrett Hurd in which he won the WBA, IBF and IBO titles at 154 pounds, making it five straight wins since the lone loss of his career against Jermall Charlo, but if you put anyone who has been knocked out before with a puncher at the level of Rosario, 30 to 1 odds are ludicrous at best. And sure, Rosario faced his share of foes with less than stellar records (0-24, 2-63, 3-64 among them), but after his first ten pro fights, he began taking on opponents who actually showed up to win and not just for a paycheck, with his only pro loss coming in 2017 to the same Nathaniel Gallimore who lost a majority decision to Williams a year later.

But that’s what the oddsmakers said as the two combatants entered the ring at the Liacouras Center in Williams’ Philadelphia hometown. Maybe those oddsmakers believed that Rosario couldn’t win a decision in Philly, but with these two, going the distance was not really in the cards.

And early on, Williams looked like he was interested in going home early, as he pumped out a stiff jab and caught the stone-faced Rosario with a couple hard right hands in the first round. Nothing deterred the 24-year-old Dominican’s march, though, leading Williams’ trainer Stephen “Breadman” Edwards to tell his charge, “Kill his fire with water,” between rounds. 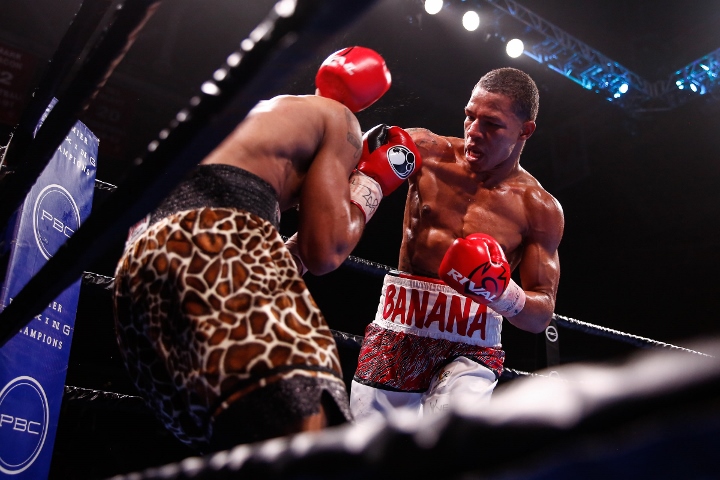 In the second, a jab from Williams appeared to buckle Rosario’s knees briefly, but the challenger responded by getting busier as the round progressed. His punches were wilder than Williams’ but by the end of the round, they were starting to find a home, and it was the hometown favorite going back to his corner with a cut over his left eye.

Despite the blood and the punches that came along with it, Williams rebounded in the third, breaking open a close round with a big right hand with a little over a minute left. Again, there were no signs of a fighter who showed up for an easy night and got a war instead. But in the fourth, Rosario began to press the action, and when he goaded Williams into exchanges, he got the better of them.

It wasn’t a big advantage, but enough that Williams was soon fighting with his mouth open, and with a little over two minutes left in the fifth round, a left hook by Rosario rocked the champion. Refusing to hold, Williams was tagged some more until he finally reached out for a clinch and wound up on the canvas. Referee Benjy Esteves Jr. called it a slip and when he asked Williams if he was okay, he got a positive response along with a smirk that brought to mind Eric Harding rising from a knockdown against Antonio Tarver, and when the referee asked about his condition, the response was, “Yeah, I’m from Philadelphia.”

That was ballsy, but moments later, Tarver stopped Harding. On January 18, it only took a couple moments for Rosario to land with a right uppercut-left hook combination to force Esteves to rescue Williams from further damage.

The Philly crowd wasn’t happy, Rosario and his team was ecstatic, and if someone took those 30 to 1 odds and bet on the underdog, their joy would surpass all of the Dominican Republic.

As for the Upset of the Year nod, Jeison Rosario wasn’t expected to beat Julian Williams, but on this night, it wasn’t the greatest shocker we’ve ever seen, but a reminder that when two boxers enter a ring to fight, anything can happen.

The runners-up for BoxingScene.com’s 2020 “Upset of the Year” award are listed below, in no particular order.

The March bout between Robert Helenius and Adam Kownacki was supposed to be a showcase for the unbeaten Kownacki, a headlining gig in his adopted hometown of Brooklyn against a fighter who had been knocked out in six rounds by Gerald Washington less than a year earlier – the same Washington who Kownacki halted in two rounds. But boxing math was not in plan on this night, as it was Helenius emerging victorious via fourth round TKO.

With one hurdle left before putting himself in position for a real world title shot (not the interim version), Dillian Whyte was seemingly on his way to jumping that hurdle after dropping 41-year-old Alexander Povetkin twice in the fourth round. A round later, it was Whyte on the receiving end of a brutal left uppercut that made highlight reels around the globe.

Despite both having unbeaten records, a glance at the competition faced by Ali Akhmedov and Carlos Gongora made it easy to see why Akhmedov was a prohibitive favorite on the December 18 card in Hollywood, Florida. And while Gongora wasn’t going away, he was losing on the scorecards heading into the 12th and final round of the super middleweight bout. Less than two minutes later, it was Akhmedov leaving the Sunshine State with a mark in his loss column.

Maybe it wasn’t the fact that Teofimo Lopez beat Vasiliy Lomachenko in their lightweight title fight, but the way “The Takeover” did it, by outboxing the master boxer over 12 rounds. As stunning as the result was, it was just like Lopez’ father and trainer, Teofimo Sr., pictured it.

Jumping up a weight class to face an undisputed champion who had never lost in her career seemed to be a mountain too high to climb for Chicago’s Jessica McCaskill. But “CasKILLA”, owner of two 140-pound titles, was up to the task against Cecilia Braekhus in August, as she did what was necessary to secure the 10-round majority decision and ALL the belts at 147 pounds.