Bellew To Uysk: I'm The A-Side, You Get a Flat Fee, I Pay You

Tony Bellew got a bit fired up after reading various interviews where Oleksandr Usyk referred to himself as the A-side of Saturday's fight.

The majority of everyone in the venue will be in attendance to back the challenger. 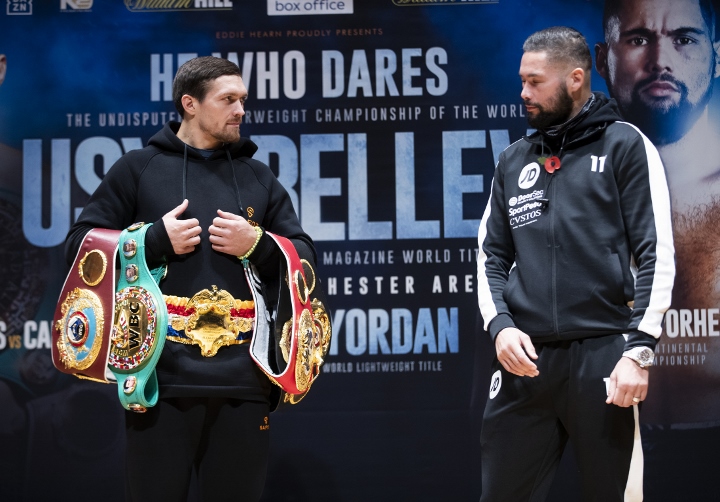 Usyk returns to the ring after winning the first season of the World Boxing Super Series cruiserweight tournament, with a dominating performance over feared puncher Murat Gassiev.

While Bellew drops back to 200-pounds, after moving up to the heavyweight ranks to upset he odds by securing back to back stoppage wins over David Haye.

If there was one thing that Bellew wanted to make clear - the facts are very clear when it comes to determining the A-side of the contest.

"I’ve seen a few comments [from Usyk saying] ‘I’m the A-side.’ Listen mate, the last thing you are is the A-side. You’re getting a flat fee, I pay you. The money’s mine, I’m paying him a flat fee for what he’s getting. It’s a lot of money but I’m paying him a flat fee, I take the venue, I take the revenue. The only reason I didn’t demand being first on posters or ringwalking second is because I believe he’s a champion, I believe he’s a great face of boxing. He is the man, so I’m giving him that," Bellew said to Boxing News.

"But believe you me, mate, I didn’t have to. I could have been the diva, I really could have. I could have done all the things that Haye done to me the first fight. But I didn’t. He’s a brilliant fighter, he’s the most formidable test of my career. I gave him that respect. I’m not one of these divas… That’s not me. I give respect and I’ve done it with him. It is what it is, we’ll see on the night how it goes.

jeez if bellew wins this he will proclaim himself better than ali and srl combined, hes had a good career and maximized his talent but the people he goes on and on about, cleverly and over the hill and far…

Respect. It's all about respect

Anyone got a stream for tonight? Had to cancel my sky, got 3 kids and only two wages until Crimbo ya dig

How is bellew the a side with demands an this guy usyk is the undisputed champ with 0 losses. Hearn has this guy confused he has like 2 or 3 losses on his record. And knockout losses. How can he…

Lots of Usyk dick suckers in this thread. "What Usyk actually meant was...!!!" You guys are sad