Bellew: If I Don't Stop After This, My Wife Will Divorce Me!

Bellew challenges unbeaten Ukrainian Usyk – who added the WBA and IBF titles to his WBC and WBO crowns in July by beating Murat Gassiev – on November 10 at Manchester Arena.

The 35-year-old Liverpudlian is returning after two heavyweight victories over David Haye to the division in which he is a former WBC champion. 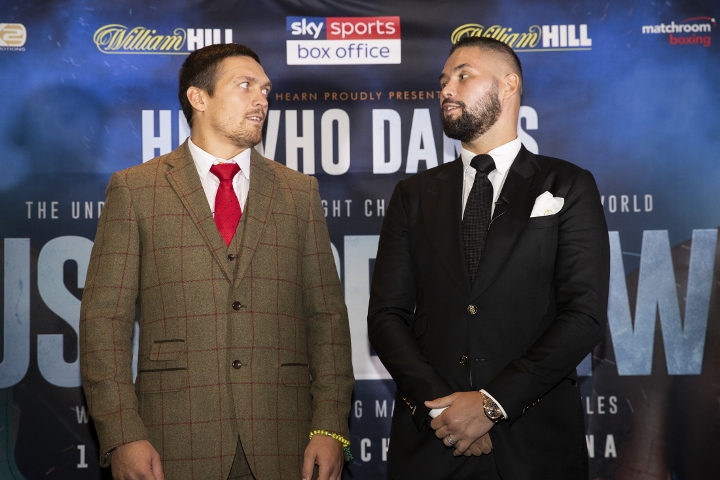 Bellew said at a press conference in Manchester on Monday, at which he and Usyk posed face to face again having done so at Wembley on Saturday when Anthony Joshua defeated Alexander Povetkin.

When he was asked if it could be the last time for people to see him in a ring before he retires, win, lose or draw, Bellew said: “If I don’t stop after this, she (his wife Rachael) is going to divorce me!

“We’ve only been married a few months. I don’t fancy getting divorced, it’s not part of the plan.

“She’ll probably be watching this. Babe, I promise you this is – maybe – the last one.”

Bellew's coach also wanted his boxer to walk away, before the opportunity to face Usyk came around.

"I wanted him to retire and walk away after the last David Haye fight. I saw Usyk call Tony’s name straight after winning the World Super Series during his interview in the ring and I thought ‘oh sh*t we’re going again’. I just knew, I didn’t have to text him or anything, I just knew it was a fight that was going to happen. So, we’re here and it’s a massive challenge but it’s only fitting," said Bellew's trainer Dave Coldwell.

"He’s a man that everyone loves to give zero chance. Now he’s showing his metal, his heart and his determination because there’s something there that he wants and he’s going to put it all on the line once more, we can’t wait.”

[QUOTE=sportbuddha;19136370]Haye was shot in both fights, second time his leg was totally immobile, they just stitched him back together to get into the ring.[/QUOTE] I agree. He was clearly injured in the 2nd fight too. Just wanted ther last pay…

And the issue is?

Both David Haye and Bellow wives are ugly. Froch, Lara, Danny Garcia, Chavez Jr, Donaire they got some lookers maybe some gold diggers but they look good. I think Wildier is taking the Floyd route he has a out 5…