That’s the argument promoter Bob Arum has made to the WBA in relation to it considering sanctioning Jarrell Miller-Bogdan Dinu as a fight for its “world” heavyweight title. As of Wednesday afternoon, the WBA still hadn’t ruled whether to strip that championship from Manuel Charr, who tested positive for two anabolic steroids last month.

If the WBA strips Charr, promoter Eddie Hearn is under the impression the Panama-based sanctioning organization would approve Miller-Dinu as a 12-round fight for what would be its vacant “world” heavyweight title. Either way, Brooklyn’s Miller (22-0-1, 19 KOs) and Romania’s Dinu (18-0, 14 KOs) are expected to headline a November 17 card at Kansas Star Arena in Mulvane, Kansas (DAZN). 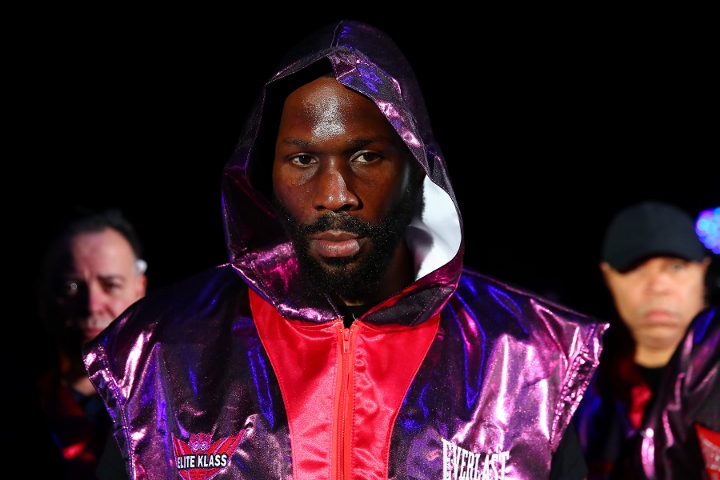 England’s Anthony Joshua is WBA’s true heavyweight champion, but its “world” champion would be in position to challenge Joshua for the WBA’s “super” heavyweight title.

“We let the WBA know that Jennings is available and they skipped over him,” Arum told BoxingScene.com, noting that WBA rules state it must go down its list of available contenders before sanctioning a championship match. “We sent a letter to the WBA to let them know that. But if they don’t strip Charr, then there’s no issue. Miller can fight whoever he wants if it’s not for a title.”

Miller is the WBA’s No. 2-ranked heavyweight, but Dinu is ranked No. 9, two spots below Philadelphia’s Jennings (24-2, 14 KOs), who’s rated No. 7. The WBA’s No. 1 heavyweight contender, interim champion Trevor Bryan (20-0, 14 KOs), turned down Hearn’s undisclosed offer to fight Miller on November 17.

The WBA is legally obligated to grant Oquendo a heavyweight title shot in accordance with his contract for a majority-decision defeat to then-champion Ruslan Chagaev in July 2014. Chicago’s Oquendo won a lawsuit to have his rematch clause enforced.

The 45-year-old Oquendo (37-8, 24 KOs), who hasn’t fought since losing to Chagaev four years ago in Grozny, Russia, was supposed to challenge Charr on September 29 in Cologne, Germany. Their fight was canceled on short notice because Charr tested positive for drostanolone and trenbolone. Those failed tests could cost Charr (31-4, 17 KOs) his title.

If the WBA allows Germany’s Charr to keep that title, his fight against Oquendo could be rescheduled for early in 2019.

According to Hearn, Oquendo turned down the Miller bout because he didn’t think three weeks’ notice was enough time to properly prepare for a difficult fight. Oquendo also reportedly wants Voluntary Anti-Doping Association testing in place for an extended period when he eventually receives his WBA title shot.

Oquendo hasn’t commented on the situation, but the fact that the WBA hasn’t stripped Charr could’ve complicated matters as well. Had he agreed to box Miller and Charr keeps the title, Oquendo would’ve faced Miller in a non-title fight, albeit for $500,000.

The availability of Sweden’s Otto Wallin (20-0, 13 KOs), who’s ranked No. 6, is unknown. Eighth-ranked Russian Alexander Povetkin recently received a WBA mandatory shot at Joshua (22-0, 21 KOs), who stopped Povetkin (34-2, 24 KOs) in the seventh round September 22 at Wembley Stadium in London.

Jesus what a joke the WBA is

WBA should just pay Oquendo off and fold their regular and super heavyweight titles into 1. This Oquendo debacle has been teabagging the WBA for the last 4 years.