Top Rank chairman Bob Arum has taken heat for the comments he recently made about losing money on welterweight world titlist Terence Crawford fights and how Crawford, in his view, needs to do a better job bringing attention to himself, but Arum said he doesn’t care about the criticism and stands by his comments.

“I don’t give a sh-t,” Arum told BoxingScene. “I don’t care because what (the Crawford camp) did was reprehensible. The lawyer sent a letter to us. OK, that’s fine. That’s what lawyers do. But you don’t release it to the press. All of this should have been behind closed doors like what men do. I’m not going to take this sh-t. I’m just not going to do it, because the truth is I’ve lost money with this guy.”

Arum said he is upset because he believes that Brian McIntyre, Crawford’s manager and trainer, leaked details of Crawford’s contract, including that his agreement with Top Rank expires in October 2021 and that Arum had promised to pay Crawford $1 million if he didn’t make an offer in 2020 to unified welterweight titlist Errol Spence Jr. to fight Crawford, in advance of Crawford’s fourth-round knockout of former titlist Kell Brook on Nov. 14 at the conference center of the MGM Grand in Las Vegas.

Arum said it has angered him so much he isn’t even interested in promoting future fight involving Crawford, one of boxing’s elite pound-for-pound fighters.

“It will be another hit on my net worth,” Arum said. “I’m being serious. I turned the whole project of Crawford over to (Top Rank president and Arum stepson) Todd (duBoef). I washed my hands of it. I’m too emotional about it.  There was this last kerfuffle with the Brook fight when he didn’t sign the contracts so we couldn’t promote on (the) Lomachenko-Lopez (telecast). I have long since departed working with Crawford.”

At issue, Arum said, was that after Top Rank and Crawford agreed to terms on the Brook fight Crawford had the contract for two weeks but declined to sign the paperwork. Arum wanted it signed so they could launch the promotion in a major way during the Vasiliy Lomachenko-Teofimo Lopez ESPN telecast on Oct. 17, which averaged a very strong 1.534 million viewers for the entire 5-hour, 47-minute broadcast, including an average of 2.729 million viewers for the main event. Crawford wound up signing the paperwork during the telecast, leading to only a brief mention of the upcoming fight.

“We kept telling them sign the f--king contract because what they were up to was to start promoting it, not have a signed contract and start a renegotiation,” the 88-year-old Arum said. “I want a signed contract. They had it for two weeks. If it was up to me I couldn’t handle it (another Crawford fight). I’m too old to handle this. I’ve taken it off my agenda. Whatever Todd wants to do.” 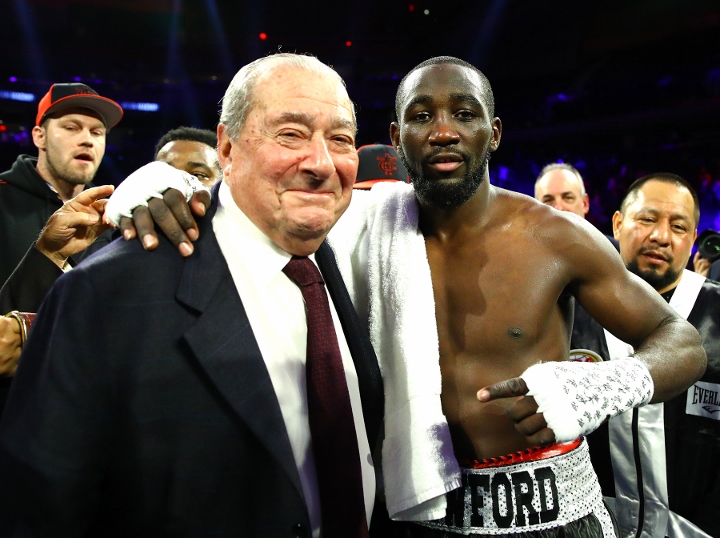 After Crawford stopped Brook, Arum made his controversial comments to The Athletic, saying of Crawford, “He’s got to promote like Lopez does. He’s got to promote like Shakur (Stevenson) does… like (Floyd) Mayweather did, like (Manny) Pacquiao did. If he doesn’t, then who the f---k needs him? He may be the greatest fighter in the world, but, hey, I ain’t going bankrupt promoting him.

“The question is, ‘Do we want to keep him?’ I could build a house in Beverly Hills on the money I’ve lost on him in the last three fights, a beautiful home. Nobody questions Crawford’s innate, tremendous ability. By beating a naturally bigger guy (Brook), decisively, that’s a big statement that’s he’s making. The question is, ‘Does he pay the bills?’ Look, you can have the greatest opera singer in the world. If the fans don’t support it, you’re out of business.”

Another issue that has caused a rift between Arum and Crawford is the inability to make a meaningful welterweight fight for Crawford, who after becoming the undisputed junior welterweight world champion in 2017 moved up in weight and won a belt but has so far not had the opportunity to face the elite of the division. Those fighters, including Spence, titleholder Pacquiao and former titleholders Shawn Porter, Keith Thurman and Danny Garcia, all are aligned with Premier Boxing Champions, making putting a fight with Crawford together difficult.

While Arum agrees that Crawford-Spence is a very attractive fight, he said the financial expectations from the boxers, combined with current conditions related to the coronavirus pandemic, make it a nonstarter for now.

In addition to attendance restrictions at whatever arena would host a potential fight, there are other factors, Arum said.

“An essential element to all the big pay-per-views is the closed circuit – the bars, the restaurants,” he said. “They can account anywhere from $3 million to $5 million to the bottom line. That’s not going to be available. And this -- the price of the pay-per-view is too f--king high because the cut that the satellite and cable systems take is way too much in my opinion. They’re down to taking about 40 percent but that’s too much. Will people be willing to have 10 or 12 people in their homes to watch the telecast? And will people have the money to buy it? I’m not crazy but I watch television and there are thousands of people outside of food banks. Those people are not customers because they don’t have the money, so what the f--- are we talking about?”

If the fight was made and there could be normal attendance at the MGM Grand, for example, Arum estimated the gate would be around $7 million with closed circuit revenue adding another $3 million to $4 million to the pot.

Arum also was vocal about Spence’s recent declaration that he would insist on the lion’s share of a 60-40 split of the money.

“Who even pays attention to that? If (Spence adviser and PBC boss Al) Haymon had to chose between doing that fight himself or doing that fight with us he would opt to do it with us. Why? Because one, we would share the risk with him,” Arum said. “But No. 2, more important, without us he can’t do the pay-per-view on ESPN+.”

Arum said that Haymon is well aware that when Top Rank and PBC put on the heavyweight world title rematch between Tyson Fury and Deontay Wilder in February in a joint pay-per-view between Top Rank partner ESPN and PBC partner Fox that nearly one-third of all the domestic buys for the event came via the ESPN+ streaming service.

“How do you replace that? And nobody (in boxing) can get on ESPN+ because we have an exclusive,” Arum said. “Thirty-two percent of the people that bought the fight bought it on ESPN+. So if he wants to do the fight without our participation, be my guest. If he wanted to do it and he came to us and said 'we want to do it', I would give him permission.”

Arum said he would make a deal to provide Crawford’s services for the fight.

“We can work that out, but he’s not getting on ESPN+ doing it that way. The problem is the guarantee that each of them want is unsustainable,” Arum said, estimating that each fighter would want a guarantee in the $10 million range.

He offered a solution, however.

“The deal that should be done is PBC and us split the promotion and the fighters get a modest guarantee and you do maybe an 80-20 or even 90-10 split (in the fighter’s favor) on each side, like the way we used to do,” Arum said. “But I ain’t gambling millions of dollars on this promotion. It’s all well and good to talk about the fight but who’s going to pay for it?”