Arum: Loma-Campbell Will Be in UK, Will Air On ESPN Platform

Luke Campbell’s hopes of getting a second chance at a lightweight title could now also result in a homecoming appearance—even if none of it worked out as his team expected.

In a move that caught many in the industry off guard, the WBC ruled in favor of a petition filed by unified (WBA and WBO) lightweight titlist Vasiliy Lomachenko to challenge Campbell for its vacant 135-pound belt.

England’s Campbell (20-2, 16KOs) has served as the WBC 135-pound mandatory challenger since a 12-round win over Yvas Mendy last September in their final eliminator, which also avenged his first career defeat. The 2012 Olympic Gold medalist and one-time lightweight title challenger was forced to wait out Mikey Garcia’s ultimately failed welterweight title bid versus Errol Spence and subsequent decision as to whether he’d return to lightweight. 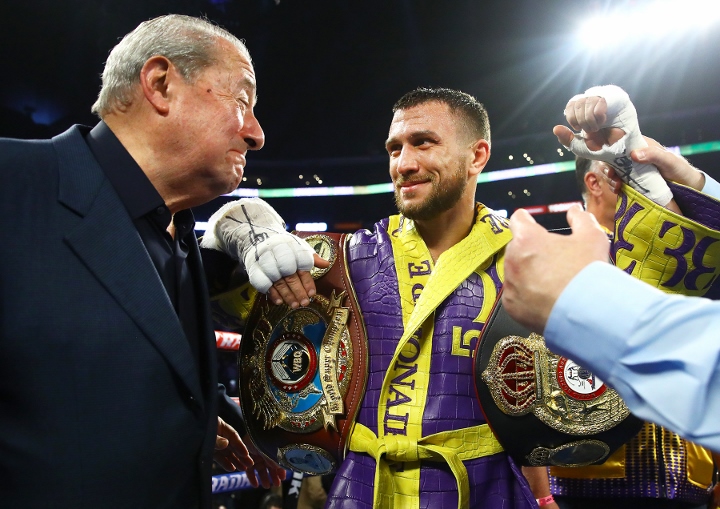 While one victory came in his being granted a straight away shot at the title, whom he is mandated to face wasn’t quite what his team planned to be the case.

“I can’t say I agree with the WBC’s decision but Luke Campbell (versus) Loma(chenko) is on and likely for the (United Kingdom),” Eddie Hearn, Campbell’s promoter stated through social media in reaction to the news. “Two Olympic champs and I believe Luke can do it!”

Lomachenko (13-1, 10KOs) had designs on collecting all four major belts at lightweight ever since his divisional arrival a year ago. The two-time Olympic Gold medalist from Ukraine survived a knockdown and major scare in stopping Jorge Linares to become the fastest-ever three-division titlist in boxing history last May.

His unification win over Jose Pedraza later in the year wasn’t nearly as competitive, claiming a 12-round decision to collect two major belts. Because of a rule that exists in the WBC by-laws, Lomachenko was permitted to file for an exception that allows for reigning titlists from other organizations to enter the WBC rankings and challenge for its titles.

As such, Lomachenko was advanced past higher rated contenders Zaur Abdullaev and Devin Haney—the latter whom Hearn recently inked to a promotional contract—in getting a straight away shot at Campbell. Their fight will likely take place in August or September in the United Kingdom.

The move ruined Hearn’s plans for a vacant title pairing between Campbell and Haney, although such a scenario always remained problematic. Despite insistence to the contrary, at no point had Abdullaev turned down an ordered fight by the WBC, which made him eligible to fight for the title even as he celebrates the holy Ramadan season which began on May 5 and runs through June 4.

At the very least, Campbell at least gets a home game for his troubles. In fact, it’s something upon which Lomachenko and his side insisted in pursuing the title.

“In talking with Loma and Egis Klimas (Lomachenko’s manager), they always wanted to fight in the UK,” Bob Arum, Lomachenko’s Hall of Fame promoter told BoxingScene.com. “They had a great experience there when Loma’s good friend, (undefeated cruiserweight champion) Oleksandr Usyk fought Tony Bellew last year. Of course, it’s also where he won his second Gold medal (in the 2012 London Olympics, following his Gold medal win in the 2008 Beijing Olympic, where he was named the tournament’s top boxer).

“That’s the plan we have for the fight. Eddie is looking for an arena and we will determine what the TV will be in the UK.”

Hearn has been the longtime primary content provider for Sky Sports and its Box Office arm in the UK. Arum, through his deal with ESPN and partnership with Hearn’s UK promotional rival Frank Warren, has a working relationship with BT Sport.

However that plays out, hometown advantage is the only concession Lomachenko’s side is willing to grant.

“The one absolute must is that the fight will be shown in the U.S. on either ESPN or ESPN+,” insists Arum, who has an exclusive pact with ESPN through 2025. “We’re fighting over there, maybe even in Campbell’s hometown (Hull, England) for all I know. But it will air on our platform, in the afternoon to make up for the time difference over there.”

[QUOTE=Boxing Logic;19727694]One of the biggest things real boxing fans should start pushing for is that every sanctioning body top 10 rankings reflects the true top 10 of the division, and includes the other champions. Boxing has been set up, IMO…

[QUOTE=Pigeons;19726564]I'd like to see Crawford follow path and fight Brook there too.[/QUOTE] Crawford is a much bigger Draw. People need to stop this bs that just because someone is from the UK they're a bigger draw. The UK would support…

[QUOTE=Mister Wolf;19726607]Haney doesn't want to be Loma's mandatory.[/QUOTE] He should want it unless he's worried about losing his L. Even if he were to lose against Loma as long as he gives a good account of himself then it would…

[QUOTE=Koba-Grozny;19728112]Bud's a keen chess player and a dog lover, man. Two things always gonna make like a dude. But yeah - comes across as smart, both in and out of the ring. Ain't so much arrogant I'd call the dude…